Extreme pressure? Diamonds can take it

Diamond retains its structure even at extreme pressures, which could reveal how carbon behaves in the cores of some exoplanets. 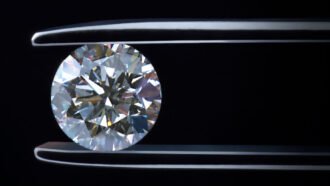 Diamond is surprisingly good under pressure. Its crystal structure holds up even when compressed to 2 trillion pascals. That’s more than five times the pressure in Earth’s core. Scientists reported this gem of a result January 27 in Nature.

The finding is surprising because diamond isn’t always carbon’s most stable structure. Pure carbon can take on many forms. Diamond is one. Others include graphite (found in pencil lead) and tiny, cylinder shapes called carbon nanotubes. Carbon’s atoms are arranged in different ways for each form. Those patterns can be more or less stable under different conditions. Usually, carbon atoms take on the most stable state possible. At normal pressures on Earth’s surface, carbon’s most stable state is graphite. But given a forceful squeeze, diamond wins out. That’s why diamonds form after carbon takes a plunge inside Earth.

Explainer: What is a laser?

But at even higher pressures, scientists had predicted that new crystal structures would be more stable than diamond. Amy Lazicki is a physicist. She works at the Lawrence Livermore National Laboratory in California. She and her colleagues pummeled diamond with powerful lasers. Then they used X-rays to measure the material’s structure. The predicted new crystals never showed up. Diamond persisted even after this laser beating.

The result suggests that at high pressure diamond is what scientists call metastable. That is, it can stay in a less stable structure rather than shift to a more stable one.

Diamond was already known to be metastable at low pressures. Your grandma’s diamond ring hasn’t morphed into super-stable graphite. Diamond forms at high pressure inside Earth. When it’s brought to the surface, it’s at lower pressure. But diamond’s structure holds. That’s thanks to the strong chemical bonds that hold its carbon atoms together.

Now, Lazicki says, “it looks like the same is true when you go to much higher pressure.” And that may interest astronomers who study distant planets around other stars. Some of these exoplanets may have carbon-rich cores. Studying diamond’s quirks at extreme pressures could help reveal these exoplanets’ inner workings.

How Did The Universe Make Our Existence Possible?

Why Are There Only 8 Gluons?

A Supernova Seen 1000 Years Ago Is Still Expanding Today