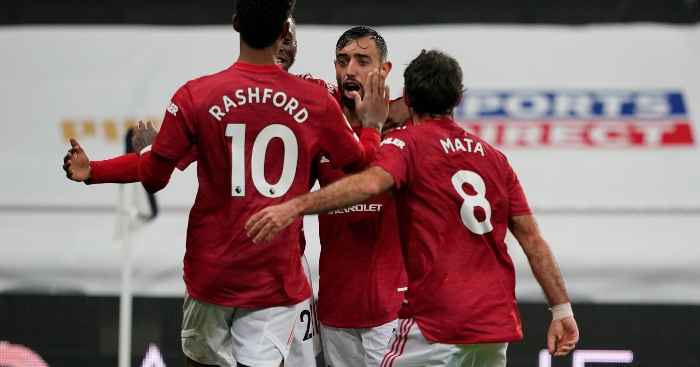 How Manchester United needed . At the end of a truly torrid fortnight in which they were embarrassed by Tottenham in the Premier League and themselves in the transfer market, the Red Devils recovered a hint of pride with a performance that will either provide a platform upon which to belatedly start their season, or serve as yet another false dawn.

The answer will come soon enough since United’s upcoming run of fixtures is one that had been tipped to signal the end for Ole Gunnar Solskjaer as manager at Old Trafford. But the beleaguered boss will clutch at the numerous positives to come from a dominant performance.

Yes, this was Newcastle – a team which looked content to play for a draw while they led after being gifted a second-minute lead. Steve Bruce’s side suffer from a hopeless lack of ambition, an ailment passed down from the boardroom to the pitch. But they made United work until the 86th minute, which will be seen by too many within St James’ Park as ample consolation.

Pleasingly for Solskjaer, though, United had to display some charm to get Newcastle to eventually succumb.

Much of that allure could be found in the class of Bruno Fernandes and Juan Mata. Fernandes did what what Fernandes does; he dragged an initially-reluctant team up the field, injecting into it some imagination and creativity. It is often lonely work for Fernandes but in Mata, he seems to have found a kindred spirit.

Mata was one of several changes Solskjaer had to make just so he was seen to be doing something about . Out went Eric Bailly, Paul Pogba, Nemanja Matic and Mason Greenwood, along with the suspended Anthony Martial. Not one of those dropped could reasonably complain, but of those who replaced them, it was Mata who really seized his opportunity.

The Spaniard is United’s current Player of the Month yet this was his first Premier League appearance of the season. Mata received the accolade of shiniest turd on the back of his Carabao Cup performances and if he felt at home tonight, perhaps that is because Solskjaer’s selection had the look of a League Cup XI.

But anything good about United, especially in the first hour, had Mata at the heart of it. He played on the left in the first half before switching to the opposite side. Whichever flank he occupied, Fernandes’ first look was always cast in that direction. Fernandes seems to trust Mata in a way he doesn’t feel able to with many team-mates. If he gives Mata the ball, he trusts him to return it.

With United’s usual front three, brimming with pace but often lacking in guile, the build up against unadventurous opposition is so often laboured. But with Mata bouncing the ball around opponents in tandem with Fernandes, Newcastle quickly became stretched, especially while they had the speed of Marcus Rashford and Daniel James to worry about too.

Bruno Fernandes has either scored or assisted in 13 of his 18 PL appearances for Man Utd pic.twitter.com/JTgqsyJARK

Mata combined with Fernandes for a fine goal which was ruled out by VAR before his set-piece delivery landed on Harry Maguire’s head. Nodding in United’s equaliser – not that he did – and a reason to believe that perhaps his England embarrassment on Wednesday may indeed have been his rock bottom.

It wasn’t all good news for United. Solskjaer must dig a little deeper among his seven candidates to partner Maguire, with Victor Lindelof bullied by Callum Wilson in the build up to Newcastle’s early opener, which was turned in by the hapless Luke Shaw. At least the left-back regained his composure and was steady for the remaining 88 minutes but Alex Telles, watching from the bench, will doubtless be expecting to take his place in Solskjaer’s XI before long.

Even Fernandes endured the misfortune of missing his first penalty in 23 attempts. Absent from this second-half effort was his customary skip, but Karl Darlow was not to be fooled. The United spot-kick taker has varied his approach previously but the Newcastle keeper was the first to get the better of him.

But Fernandes had his revenge when he scored perhaps one the best goals of Solskjaer’s reign. With United firing continuous blanks at Darlow’s goal – the Red Devils had more shots (29) tonight than any team in any other Premier League game this season – they raced from back to front, with Donny van de Beek, Fernandes, Mata and Rashford all involved. A delicious move got the finish it deserved when Fernandes took a reverse pass before finding the top corner with a shot a keeper with three arms would not have stopped, let alone one with one leg. Which is what Darlow effectively was for the last 20 minutes…

Bruce’s reluctance to replace the hobbling stopper was bizarre but his inaction summed Newcastle up. If there is one side who cannot do without a healthy keeper, it is surely the Magpies.

Newcastle United currently allowing shots at a rate of 17.2. The last Premier League team to surpass that over a season was Sunderland in 2016/17.

Darlow was beaten twice more, with Aaron Wan-Bissaka helping himself to some of the confidence Newcastle were dishing out, before Rashford applied an added layer of gloss to the scoreline, one which fairly represented United’s dominance.

Next up: PSG away. And it gets no easier after that, with Chelsea, RB Leipzig, Arsenal, Istanbul Basaksehir and Everton to come in the next three weeks.

Solskjaer will likely restore Rashford to the left on Tuesday, with Martial and Edinson Cavani both available to lead the line. Pace on the break may be the theme in Paris, but Mata has shown that United do have a different option to fill the void on the right flank.

Jessica Eye vs. Joanne Calderwood on tap for UFC event on Jan. 23