F365’s early loser: Ed Woodward, witness to his own incompetence

Crystal Palace shone the … The post F365’s early loser: Ed Woodward, witness to his own incompetence appeared first on Football365. 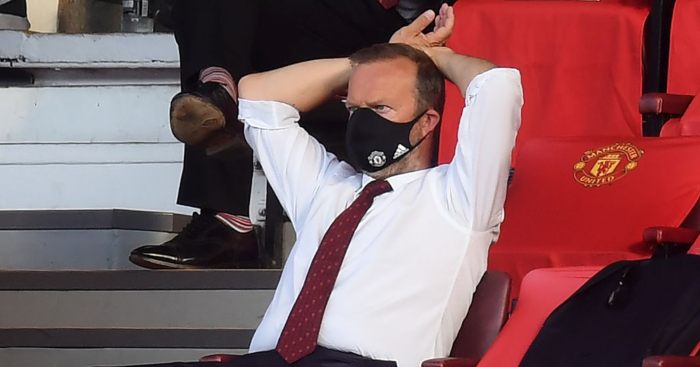 If Ed Woodward was already ‘frustrated at the social media frenzy’ surrounding Manchester United’s transfer inactivity, then the vice-chairman might be best advised to swerve Twitter for a day or two.

Even if he should be used to it by now, Woodward has been getting pelters for much of the summer, long before the final whistle blew on . But in the face of more accusations of sleeping on the job, similarly to Ole Gunnar Solskjaer, the brains trust at Old Trafford has no reasonable defence.

That didn’t stop Woodward from trying to cover himself in his programme notes before Roy Hodgson brought his Eagles to Old Trafford.

“Disruption from the pandemic is continuing to create huge economic pressures from the top to the bottom of the football pyramid and, while we are fortunate to be in a more resilient position than most clubs, we are not immune from the impact.”

After revelling in new contracts for four academy graduates and the signing of a couple of teenagers from Barcelona and Real Madrid’s youth ranks, he continued…

“Together, these investments reinforce our optimism about the future, and we will continue to build on these strong foundations. However, we must also be responsible in our use of resources during the most extraordinarily challenging time for everyone in football.”

Amid the arse covering is some fair comment but where United supporters and Woodward disagree is over what a ‘responsible use’ of the vast resources available to one of the world’s richest football clubs might be. The evidence suggests that Woodward and his cronies don’t deem ‘improving the football team’ as high on the list of the club’s priorities.

It seems United, at board level, do not recognise the need to improve. The opening theme of Woodward’s notes centred on the anticipation around seeing ‘our exciting young team build on the progress made’ last season.

Even during that climb to third place in the Premier League and three runs to cup semi-finals, United’s shortcomings were stark. But for Woodward and the board, Palace shone the brightest light on the Red Devils’ weaknesses and the reasons Solskjaer has not a hope of taking United any further without some significant reinforcements.

If @dave35678094 on Twitter can see that United woefully need a competent left-back, a mobile centre-back and a creative forward on the right flank, then Woodward could use the next programme to clarify why he disagrees.

While Man Utd struggle with a barely-competent left-back and a gaping hole on their right flank, Spurs have announced the signing of a left-back and a winger…https://t.co/MlZZdpa4B7

Palace’s opener provided the most succinct evidence imaginable for why United need to revamp half of their defence. Both Victor Lindelof and Luke Shaw failed to demonstrate even the hint of a defensive instinct, with the centre-back almost clearing a path for Jeff Schlupp to tee-up Andros Townsend, whom Shaw deemed not enough of a threat to break out of a trot until it was too late. Though we are presuming Shaw is still capable of the necessary change of pace. The evidence there is sadly lacking.

Lindelof’s misery continued. The Swede was harshly punished when Palace were awarded their second-half penalty but he then fluffed two tackles which led to Wilfried Zaha goals – one chalked off for offside; the other sealing a thoroughly-deserved win for a Palace side which has shaken off a disastrous ending to last season with . Their speed, organisation and resilience should not be forgotten in the Old Trafford post-mortem.

But those Palace qualities certainly won’t be the dwelled upon by United supporters demanding to know why the club are doing so little to keep pace with the strengthening of their competitors.

The right flank is said to be ‘a priority’ for United but their attempts to address that gaping hole on the wing are bordering on negligible. Jadon Sancho is the man they want – but Woodward’s greatest desire is for a bargain deal.

Borussia Dortmund are simply not going to cave when it comes to the England star, especially when . The Germans have a selling price and for as long Sancho is under contract and content to stay in a place he is comfortable then why should they lower it? As the clock ticks down to October 5, time is most certainly on Dortmund’s side rather than United’s.

Woodward faffed in January too and it seems the noise after a 2-0 home defeat to Burnley lit a fire under his backside to agree to Sporting Lisbon’s deal for Bruno Fernandes, which was drifting in a similar manner to their pursuit of Sancho. Perhaps an even darker ‘cloud of negativity’ which is forecasted to roll in over Old Trafford in the coming days will prompt some action from Woodward, Matt Judge (head of corporate development by day, transfer negotiator on the side) and the rest of a recruitment team seemingly incapable of doing more than one thing at a time.

The post F365’s early loser: Ed Woodward, witness to his own incompetence appeared first on Football365.

Calvert-Lewin continued his impressive start to the … The post Comparing Calvert-Lewin’s stats under Silva & Ancelotti appeared first on Football365.

Dominic Calvert-Lewin continued his impressive start to the season by scoring a hat-trick in Everton‘s 5-2 win over West Brom.

Calvert-Lewin found himself in and out of the side under Marco Silva but has enjoyed upturn in form at Goodison Park following Carlo Ancelotti’s appointment in December 2019.

We’ve compared the 23-year-old’s Premier League stats under Silva to those he recorded under Ancelotti at Everton to see where he has improved.

Head of FIFPRO: PL clubs have depth to cope with five subs...