Forget the pale, crumbly and too-sweet pillow bread that fuelled the focaccia rage of the 90’s. This is how a timeless and traditional Italian Focaccia recipe should be: ridiculously soft and fluffy inside, just-crispy on the outside and with a signature ​chew​ from the secret ingredient – potato! About this Focaccia recipe Focaccia – that flattish,... Get the Recipe The post Focaccia recipe (it’s incredible) appeared first on RecipeTin Eats. 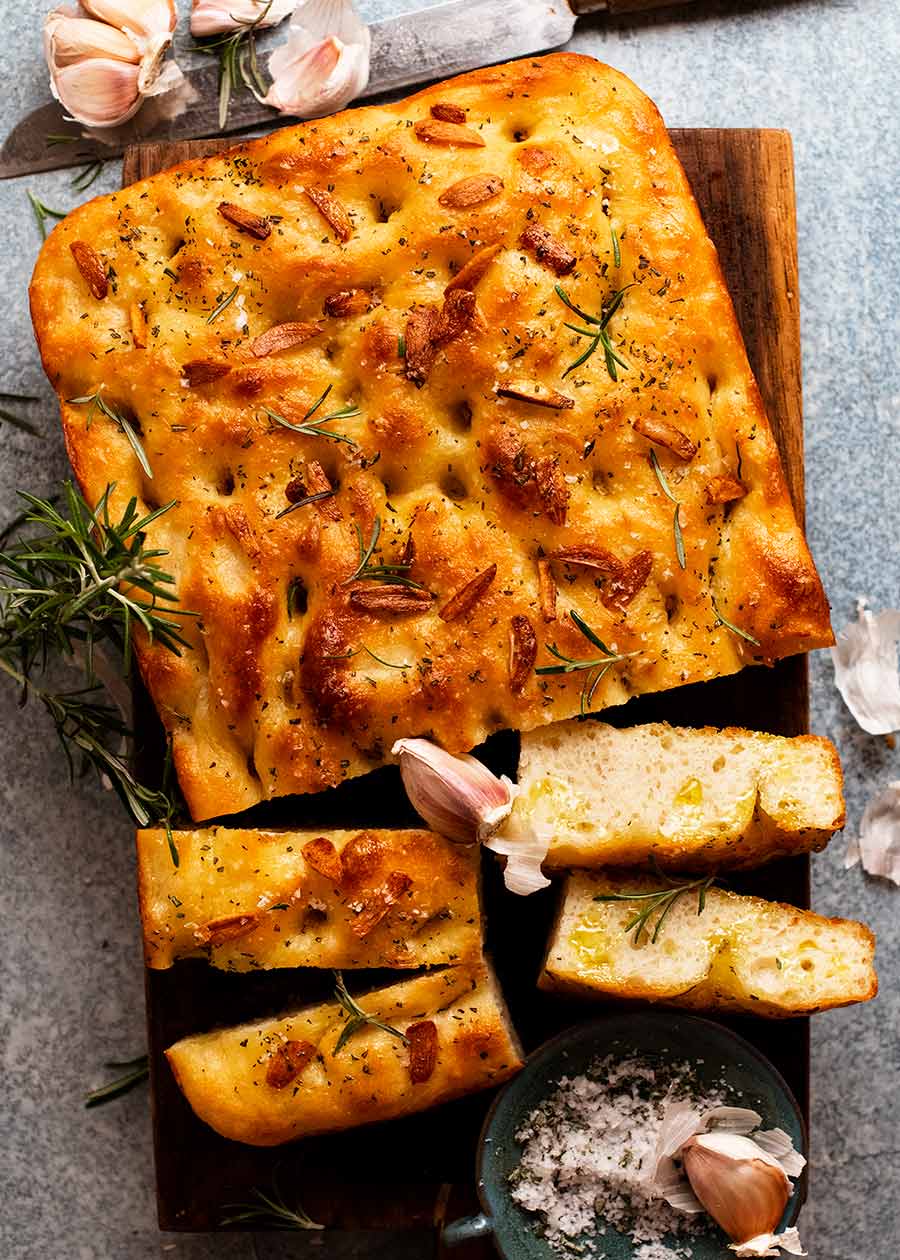 Forget the pale, crumbly and too-sweet pillow bread that fuelled the focaccia rage of the 90’s. This is how a timeless and traditional Italian Focaccia recipe should be: ridiculously soft and fluffy inside, just-crispy on the outside and with a signature ​chew​ from the secret ingredient – potato!

About this Focaccia recipe

Focaccia – that flattish, traditional tin–baked Italian bread generously flavoured with olive oil – is found all over Italy and varies from place to place. I was torn with indecision about what type of focaccia to share, but eventually landed on this particularly well-known type called focaccia barese from Southern Italy.

It’s from the city of Bari in Puglia, and this focaccia has an exceptionally fluffy interior and distinctive chew that comes from incorporating mashed potato into the dough.

I love that the potato clearly distinguishes it from just another type of basic bread!

The outside crusts meanwhile takes on a lovely golden crunch from baking in the pan thanks to An Italian Dash of Olive Oil (ie. more than a teaspoon

Together these features come together in a focaccia probably quite unlike any you’ve tried – so get set for a revelation!

What makes this Focaccia recipe different?

For those of you who are interested in the nitty gritty of focaccia-making, here is some background information about focaccia barese which is the type of focaccia we are making here today!

The recipe does require three proofs for the dough. But really, it is not a big deal! They are quick and the benefit is no messy kneading on the counter or in the stand-mixer. It takes just 1 hour 40 minutes for rising in total for the whole recipe, and just a minute or two to prepare the dough for each rise.

We tried reducing it to 2 proofs but found the result wasn’t as good, and 1 proof was even more inferior.

We need to rise the dough 3 times because because the dough is so wet we can’t knead it. Instead we let the bread “knead” itself through proofing. Proofing and folding several times before baking encourages gluten development and starch transformation to give the bread structure, as well as the time to develop flavour.

What you need for this Focaccia recipe

Here’s what you need for the focaccia bread. Toppings are shown separately below.

This is a “plain” classic version made using fresh rosemary and garlic – though there’s nothing “plain” about homemade focaccia!

We’re using confit garlic which might sound fancy, but it’s just garlic that’s cooked in oil over a low heat until soft. Why do we have to bother, you ask? Because otherwise the garlic burns too much at the high oven temperature required to crisp the surface of the focaccia. Soft-cooking larger pieces helps protect the garlic. Nobody wants bitter black bits of garlic on their focaccia!

Made with cherry tomatoes, the trick with this is to squish them before pressing them firmly into the dough. This makes the tomatoes soften and stay semi-sunk in the dough, and allows the juices to seep into the crumb (the best part!).

If you don’t squish, the cherry tomatoes kind of pop out and end up rolling around on the surface of the focaccia… and inevitably across the floor!

I’ve used oregano as the herb but any dried mixed herbs or fresh rosemary will also work well.

Kalamata olives (pitted) make an ideal choice here. I love how juicy and salty they are, and how the deep purple, almost black colour, really stands out against the golden brown surface.

I’ve used oregano as the herb for this one too, but rosemary also works well (fresh, not dried).

In addition to the above toppings, all focaccia are finished with a generous drizzle of olive oil and a good pinch of sea salt flakes. It’s really worth using sea salt flakes for the surface, rather than cooking / kosher salt so they stay mostly whole as little salty pops rather than dissolving into the bread surface.

Love the way the olive oil pools in the holes!

As mentioned above, this focaccia recipe calls for 3 dough rises which takes 1 hr 40 minutes in total. Read more about why it’s worth it and yields a better result – don’t skip it!

Also, it’s worth noting that this is a no-knead bread. The dough is quite sticky, so it’s simply mixed with a spatula!

This is what the underside of the focaccia should look like – a deep golden brown, and beautifully crispy like it’s been fried. Which it practically has been – in all that delicious olive oil!!

As for how to serve it? A little final drizzle of olive oil across the surface before slicing up into thick batons certainly won’t go astray.

And though some might think we’re olive oiled-out, providing a little extra for dunking isn’t such a bad idea either!!

The focaccia will keep for a few days in an airtight container, but I do recommend reheating before serving. It will reinvigorate it to near-freshly made state – warm, soft and fluffy on the inside, golden and crispy on the outside.

Focaccia this delicious and varied can wear many hats. It’s easily worthy of a party antipasto or appetiser spread. It also makes a great snack or picnic food. Sandwich bread? Toasted for breakfast? For sure. Or, serve it alongside just everything and anything – especially stews, braises and soups. There is nothing Focaccia doesn’t work with (except, ok, maybe Asian food, you get a hall pass … !) and your imagination really is the limit with this one! – Nagi x 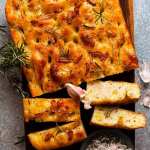 Recipe video above. Forget the pale, too-sweet pillow bread that fuelled the focaccia rage of the 90's. This is how Focaccia should be – crispy on the outside, yet moist and fluffy inside with a little chew, this authentic Italian bread is bursting with character and impossible to stop at one slice!
Course Breads
Cuisine Italian
Keyword focaccia, focaccia recipe
Cook Time 30 minutes
Dough rising 1 hour 40 minutes
Servings 6 – 8 people
Calories 265cal
Author Nagi

1. Bread flour – high protein flour especially for bread which yields a chewier, more elastic crumb than using plain/all purpose flour. If making focaccia for company, worth a trip to the store to get it! But it’s still worth making with plain/all-purpose flour. The crumb is just not quite as chewy. 2. Instant / rapid rise yeast – this is the yeast that doesn’t need to be mixed with warm water and left to foam before using. It is just added straight into the dough. We found this makes the fluffiest focaccia. Dry active yeast – to make this using dry/active yeast, change recipe steps as follows: Fresh yeast – haven’t tried yet! 3. Potato – use all-rounders or floury potatoes, just avoid waxy ones. Australia – Sebago (dirt brushed) are great. US: Russet or Yukon Gold. UK: Maris Piper 4. Sea salt flakes work best for sprinkling across the surface, rather than cooking/kosher salt. Definitely do NOT use table salt– too fine, makes it too salty, 5. Garlic Rosemary – this is a classic topping option. For this, we need to make Confit Garlic instead of using just raw garlic on the surface because raw garlic burns at the high temp required to bake the focaccia. Confit garlic becomes soft so it wonʼt burn, it will go golden and a bit crisp. The next day, some of it goes jammy which is sooo good! GARLIC cutting: Cut the garlic into 2mm thick slices then each slice into 6mm / 1/4” thick pieces. 6. Dough rising: The rate at which dough rises and how much it rises in the times provided depends how warm it is. At 25°C/77°C, the dough will rise by almost double in Rise 1 and Rise 2. Don’t let the dough by much more than double (eg. triple in size) because the yeast may run out of rising power so the focaccia doesnʼt rise as much as it should when baking. My winter fallback for dough rising: the dryer! Run it (empty!) for a couple of minutes, then put the bowl in and quickly close the door. A warm cosy place for the dough to rise! 7. Pan – Metal pans will make the crispiest crust, and non-stick is best. If you don’t have a non-stick pan, ensure you oil the pan base evenly and well. It may slightly stick but will still come out. Glass works fairly well too. 9”/23cm round cake pan also works great – see the olive focaccia pictured in post. Better if itʼs not springform as it leaks oil. 8. Dimples: Donʼt be shy with this step – make lots of holes, you cannot ruin it, I promise! They donʼt need to be even, irregular is fine. Most of the holes disappear when baked. 9. Storage – Focaccia keeps well for a few days sealed in a zip lock bag. I highly recommend reheating in the oven to make the inside soft and fluffy again, and crisp the outside! 10. Nutrition per serving, assuming 8 servings.