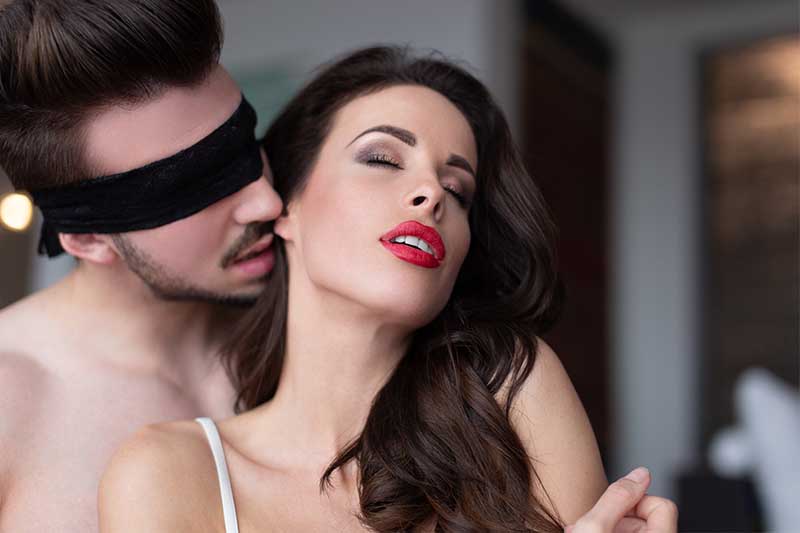 Like a lot of guys, for a long time I wondered:

“What's the easiest way to get a woman to do whatever I want in bed?”

Though as I later learned, this was the entirely wrong approach to take…

Hi, I’m Ruwando, and as part of my ongoing series, I’m answering your most difficult, burning questions related to sex and dating.

Because honestly, if you follow the right steps… and get some practice under your belt…

It's Ruwando here for Gotham Club, and in this video, we're gonna talk about how to get a woman into kinkier things.

So, this is a question I get a lot:

NEW STUDY: 30% Of Women Want to Try THIS Kinky Sex Move (But Won’t Admit It)!

And I actually want to start by picking on the way most people ask, most guys ask.

… you're setting up this conflicting frame right off the get-go. That's not gonna be useful, and is actually probably gonna harm your relationship.

They just don't like the type of sex that most guys push on them, or the fact that a lot of guys push a certain kind of sex on them.

All this means for you, is that you want to frame it as if this is for both of you.

This is for her, even, because she's gonna enjoy all the kinky stuff.

The next thing I want you to understand is that, when a woman is turned on, she doesn't need any convincing.

If she feels turned on, and she feels safe, she'll probably want to do it.

With that said, some women are very conservative. Some women don't have experience with that, and there are things you can do to encourage them to do that.

You want to understand that you've got to go into things gradually.

At any point, even if she does want to do this, and you drag her along or push her into something…

She might experience what we know as buyer's remorse, or think of it just like with sales.

Like, even if there's a product you wanna buy, and someone is being a really hard seller and pushing you through it…

Even if you buy it, and even if you wanted it, you're gonna feel like crap.

So, you have to go gradually. You have to make sure she feels the desire to do it too.

And to do that, you wanna start with finding out what her desires are, 'cause it has to come from her.

You don't even have to frame it as like, “Oh, I'm doing this because I want us to become kinkier.”

Just find out, because that will make you a good lover, period, even if you don't do anything kinky.

Find out what she's into. See if you can pull out the stuff that maybe she's been afraid to explore or share.

Because maybe her first boyfriend was super conservative, or some female friend of hers shamed her for it, or her parents shamed her.

You have to set her up to know that she can share everything with you, and you're not gonna judge.

You're gonna approve, and maybe, just maybe, you're gonna throw things in later, knowing that she wants it.

3) Approve Of Her Desires…

So, a simple example that I think a lot of guys have uncovered with women, is that many women have things like the “daddy-daughter fantasy” or something else that's taboo.

I'm just using this as an example. If you know this about her, you can throw in little things when you have your regular vanilla love-making, to encourage her, and show her that you approve of it.

It can be really fun, and that's the entryway to kink, right?

She's got some desire that she doesn't approve of, and you're meeting her there. You're encouraging her, and you get to have a lot of fun there.

Once she realizes that her desire is cool, it's fun, it's approved of… then you can start introducing some of your own things.

Again, you have to really frame it as you're both meeting together, with your desires that you maybe don't share. Not that you're pulling her along, because that's never gonna last.

You don't judge. You don't get angry.

Because you don't know what her history is with that.

Maybe that's kinky to you. I don't know.

You have to come at it with a place, where you're not judging or approving, and you are not getting triggered either. Because if you get triggered by her stuff, then it's done.

So, you have to make sure you're approving, and going slow–especially around anything that feels shameful, because everybody's got their weird hang-ups, right?

Or I know people that would never have sex in public, but they'll totally dream about it in sexual fantasy.

So, you just have to know that your kinks and her kinks, your shames and her shames, are not always gonna line up. But it's your job, as the man, to approve and go slow.

And don't forget to find the fun spots along the way!

I see this a lot, especially with the couples I've counseled in sexuality.

And they forget that the whole point of sex in the first place is fun.

Again, with going slow, every stage you're in, and every time you evolve to a new level of kinkiness… you have to ask yourself, what was fun about this?

5) Talk About It Afterward (Plus Why This Is So Important)…

To add to that, I'd say good communication after every single sexual experience–even if it's late, even if you're dating a super conservative girl–is super important.

Even talking about just the fact that you turned her over during sex. Maybe that was a big deal to her.

So talk about it afterward.

Make sure you're highlighting the fun parts, the sensational spots. Especially if she's like, “Oh, my God, it felt so weird, and I felt such a bad person when I was bent over.”

But you can just remind her, “It felt good, right?”

Start with the fact that it's fun, before you go into whips and chains, and all the crazy stuff.

Like I said, it helps to start off with some simpler kinky moves first, and then ease her into the harder stuff.

Here are a few examples:

As a sex guru, I’ve learned a LOT of surprising things about women over the years…

But the most surprising secret?

Almost every single woman is into , at least a little bit.

Of course every woman is different… some girls love a light spanking… while others crave a rougher touch, that leaves them bruised the next day…

… but the reality is, once a woman has rough sex once, she’s probably gonna want to have a lot more of it…

… because that added roughness can give her HUGE explosive orgasms.

But of course… you’ve gotta

You can’t just start face-f*cking her out of nowhere and expect her to love it.

Instead, simple phrases like “You like that?” or “You want it harder?” will not only turn her on more… (because it’ll force her brain to focus on the physical sensation)…

… BUT will also help you figure out EXACTLY how rough she wants it.

And from there, you can ease her into rough sex with these 3 simple moves, that almost all women love…

And trust me, if she wants it rougher, she’ll tell you:

Various Artists – Right Back Where We Started From – album review

Report: No New COVID-19 Cases Across NFL Ahead Of Patriots-Broncos Game

How To Be A Dom: Sexually Dominate Her for MAXIMUM Pleasure…

This 5-Question Quiz Uncovers the Perfect Girl for You