Gene editing can alter body fat and may fight diabetes

Researchers have long dreamed of using brown fat to fight obesity and diabetes. Work in animals shows they’re closing in on achieving that dream. 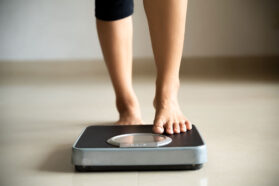 People are among mammals that have “bad” fat and “good” fat. Too much of the bad type, which stores energy, makes us obese. The brown type burns energy, helping us stay lean. Scientists have now created human brown fat cells in the lab and tranferred it into mice. These rodents gained less weight from a fatty diet. They also became healthier.

Scientists hope such a strategy might do the same thing in people.

It’s been well known that infants and hibernating animals have brown fat. Mice, for example, have depots of it between their shoulder blades. This fat’s color comes from a high blood flow and many tiny power factories, known as mitochondria (My-toh-KON-dree-uh). Low temperatures turn on those power factories in brown fat. Mitochondria convert to heat the chemical energy in food and stored white fat. This helps infants stay warm and small mammals survive cold winters.

In 2009, researchers showed adult humans also have brown fat that responds to cold temperatures. Adults also have beige fat scattered within their white fat. Beige fat is not quite white or brown but somewhere in between. When needed, it becomes brown to turn more calories into warmth. It becomes white-ish again when that’s no longer needed. How much brown and beige fat adults host is unknown, but it’s a lot less than in mice. The amount strongly depends on someone’s body composition. Lean people tend to have more active brown and beige fat than do obese people.

Scientists had wondered whether they could treat obesity by turning white fat into brown, notes Yu-Hua Tseng. She is a molecular biologist at Harvard Medical School in Boston, Mass.

Her team has now done this in mice. The group described how on August 26 in Science Translational Medicine.

A HUMBLE (but surprisingly powerful) innovation

Plastic surgeons on Tseng’s team took cells that will become fat from the necks of patients. In the lab, this tissue grows into white and brown fat. To make the white fat behave like brown fat, the researchers used a technology known as CRISPR-Cas9.

CRISPR often is used to swap out some genetic building blocks with others. Tseng’s team instead used the technology to insert a molecular switch into the DNA of white fat cells. This switch turned on a gene called UCP1. In brown fat, that gene causes mitochondria in to churn out heat.

The inserted switch boosted almost 20-fold how much protein the UCP1 gene made. That extra protein turned the white fat cells into cells the researchers call HUMBLE. It’s an acronym for “human brown-like.” They then transplanted HUMBLE cells into mice. (First, they disabled the immune system. Otherwise, a mouse’s immune cells would have attacked the foreign human cells.)

One set of normal-weight mice ate fatty food for two weeks before the transplant and for four weeks after. A second set of mice was already obese.

Each set of mice included three groups. One group received HUMBLE cells. The second group received white fat cells and the third got brown fat cells. All those cells came from the same human donor.

At the end of the study, the researchers weighed each mouse. Obese mice given HUMBLE or brown cells now weighed 20 percent more. Obese animals given extra white fat cells weighed 30 percent more. (In the normal mice, the body weight difference between the three groups was smaller than in the obese ones.)

The researchers also measured how much blood sugar, or glucose, the different cells took up. “To our surprise, it was not the transplanted HUMBLE cells that took up the most glucose,” says Tseng. “It was the brown fat the mice already had.”

Tseng was thrilled to see this. It means HUMBLE cells communicate with the existing brown fat. The transplanted cells released chemical signals. And those told the mouse’s own tissue to take up more blood sugar. These changes made the mice healthier.

Creating cells that signal as in real people — while in another species — “is impressive,” says Wouter van Marken Lichtenbelt. He’s a physiologist who co-discovered adult human brown fat in 2009. He works at Maastricht University in the Netherlands.

Could this fight disease?

Tseng hopes this innovative use of CRISPR tech will one day treat obese people with diabetes. She can imagine doctors removing a patient’s fat cells and editing their DNA. The doctors would then return the cells back to that person (without firing up an immune attack). She says it would be “almost like waking up your own fat cells to boost your glucose metabolism.” By glucose metabolism, she refers to the body’s uptake and use of blood sugar. That process no longer works normally in diabetes.

For now, the researchers need to look for any side-effects. We don’t know whether it’s safe for adults to have as much brown fat as babies, points out van Marken Lichtenbelt.

Silvia Corvera is a molecular biologist at the University of Massachusetts Medical School in Worcester. In 2016, her group used a chemical method to turn on human beige fat. It, too, improved glucose uptake in mice. But before Tseng’s study, it wasn’t clear whether the increased UCP1 gene activity alone caused this benefit. Showing that here, Corvera says, is a major advance.

Corvera is now testing her approach in monkeys. Obese monkeys and people develop diabetes at similar rates. If the method works in monkeys, testing it in people will be next.

BREAKING: Ministry of Justice confirms evictions now halted in ‘high’ as well as...

You should guess answers to your homework before searching...

Strange but true: White dwarfs shrink as they gain mass