Weidmann asked German President Frank-Walter Steinmeier to dismiss him from office at the end of the year. 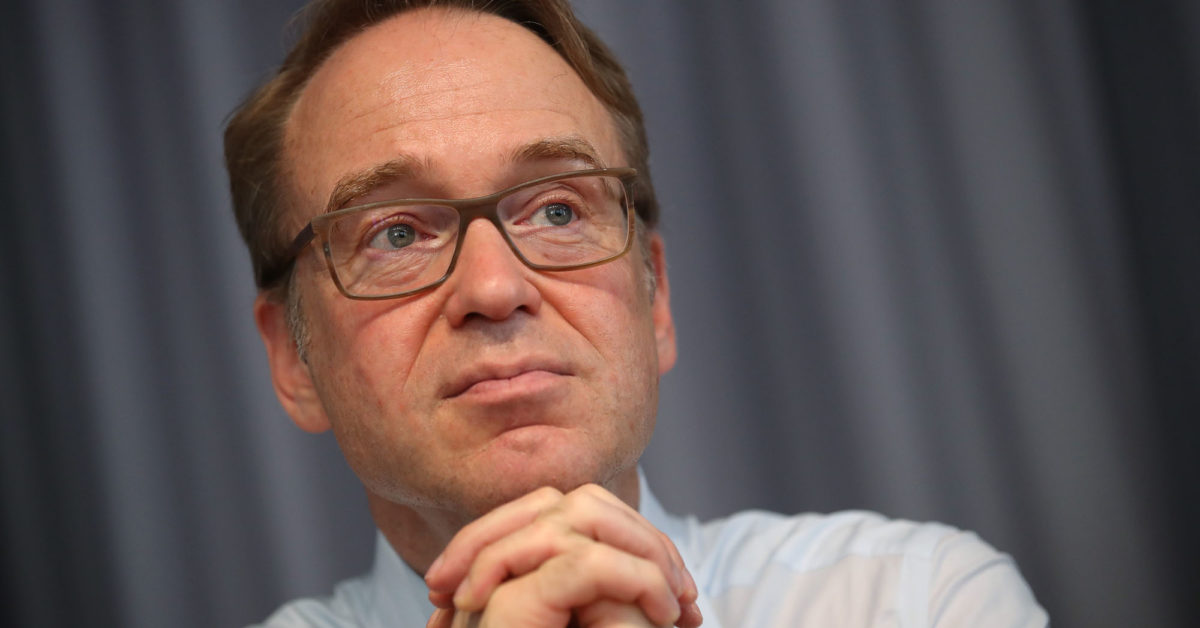 FRANKFURT – Bundesbank President Jens Weidmann said Wednesday he will leave the German central bank at the end of this year due to personal reasons —  but used the chance to re-assert his warning of inflation risks.

Weidmann asked German President Frank-Walter Steinmeier on Wednesday to dismiss him from office on 31 December, the Bundesbank said in a statement.

“I have come to the conclusion that more than 10 years is a good measure of time to turn over a new leaf — for the Bundesbank, but also for me personally,” Weidmann wrote in a letter to the Bank’s staff. He did not elaborate further.

Weidmann, a well known inflation hawk, became president in May 2011 after his predecessor Axel Weber resigned in protest of ECB crisis measures.

At the time, Weidmann privately criticized Weber for resigning rather than fighting on for the policies he believed in. But he may have developed more understanding for Weber’s call in recent years, as he fought his own struggle as an ever-lonelier hawk on the Council.

In his statement, however, Weidmann hewed a diplomatic line, saying only he continues to firmly believe the ECB should stick with its original narrow mandate of controlling inflation.

“A stability-oriented monetary policy will only be possible in the long run if the regulatory framework of the Monetary Union continues to ensure the unity of action and liability, [and] monetary policy respects its narrow mandate and does not get caught in the wake of fiscal policy or the financial markets,” he wrote.

That comment may be a nod to ongoing discussions on the Governing Council to transfer some of the flexibility of the pandemic-induced asset purchase program, known as PEPP, to previously existing programs. This move would allow the ECB to focus its government bond purchases on individual member states, thereby removing spreads in borrowing costs and, arguably, reducing the incentive for sound fiscal policies.

Weidmann also said policymakers must remain alert to prospective inflationary dangers and not just look at deflationary risks. But he thanked his colleagues on the Governing Council “for the open and constructive atmosphere in the sometimes difficult discussions of the past years.”

“While Jens had clear views on monetary policy I was always impressed by his search for common ground in the Governing Council, by his empathy for his Eurosystem colleagues, and his willingness to find a compromise,” she said in a statement.

Weidmann’s resignation will open another key position to be handed out in German government coalition talks.

The chief of the Free Democrats, Christian Lindner, tweeted that he regrets Weidmann’s decision.

“He stood for a stability-oriented money policy, the importance of which is on the rise given inflationary risks,” said Lindner, who has an eye on the finance ministry.

Names of potential successors previously floated include ECB Vice President Claudia Buch, German state secretary Jörg Kukies, and economists Marcel Fratzscher and Volker Wieland.  Another option would be for ECB Executive Board member Isabel Schnabel to move over to the Bundesbank and leave her current job for one of those candidates.

This story has been updated.

This article is part of POLITICO’s premium policy service: Pro Financial Services. From the eurozone, banking union, CMU, and more, our specialized journalists keep you on top of the topics driving the Financial Services policy agenda. Email for a complimentary trial.

New Democracy played a pivotal role in clearing the way for justice to be served.

The recent article “Street brawls and Nazi salutes: Greece grapples with far-right resurgence” (October 18) rehashes unfounded and largely unattributed claims against the Greek government and prime minister that have often been deployed by the official opposition.

New Democracy is a political party that has steadfastly and consistently opposed racism, hatred, fascism, political violence and extreme divisiveness. It was in 2013, when New Democracy was in power under Prime Minister Antonis Samaras, that the prosecution of the neo-Nazi Golden Dawn party began and its state funding was discontinued.

That year, the Greek judiciary ordered the arrest of the Golden Dawn leadership and several of its members, following an investigation initiated after the murder of anti-fascist activist and artist Pavlos Fyssas. These arrests were the result of a methodical and tenacious probe into the entire spectrum of Golden Dawn activities and its hierarchy.

However, during the Syriza-led coalition with the populist right in the four-and-a-half years that followed, from January 2015 until July 2019, developments relating to Golden Dawn proved contradictory and incongruous. Notably, the trial of Golden Dawn’s leadership — on charges of leading a criminal organization — never reached completion. A failure, which was even attributed to the inability to find a courtroom.

Greece’s current Prime Minister Kyriakos Mitsotakis, who was the leader of the biggest opposition party at that time, spoke out about these delays, and in the run-up to the 2019 general election, he made the condemnation of Golden Dawn a central political priority, asking the Greek people to vote the party out of parliament.

Mitsotakis was vindicated by the election result. New Democracy prevailed at the ballot box, while Golden Dawn lost its seats in parliament for the first time since 2012 — an outcome that was hailed internationally. And in 2020, Golden Dawn’s leadership was finally convicted in court and imprisoned for directing a criminal organization.

On the day that the verdict was announced, the prime minister stated, “Αfter the Greek people voted the neo-Nazi party of Golden Dawn out of Parliament in the last election, today the Greek justice system convicted its leadership of operating as a criminal organization. A truly historic day for Greece, democracy and the rule of law.”

New Democracy played a leading role in the efforts clearing the way for justice to be served and sending Golden Dawn back to the political fringe. These facts are indisputable, and they explain why the current government does not, and will not, accept any finger-wagging when it comes to its democratic sensitivities.

Scotland’s lockdown to ease from May 28