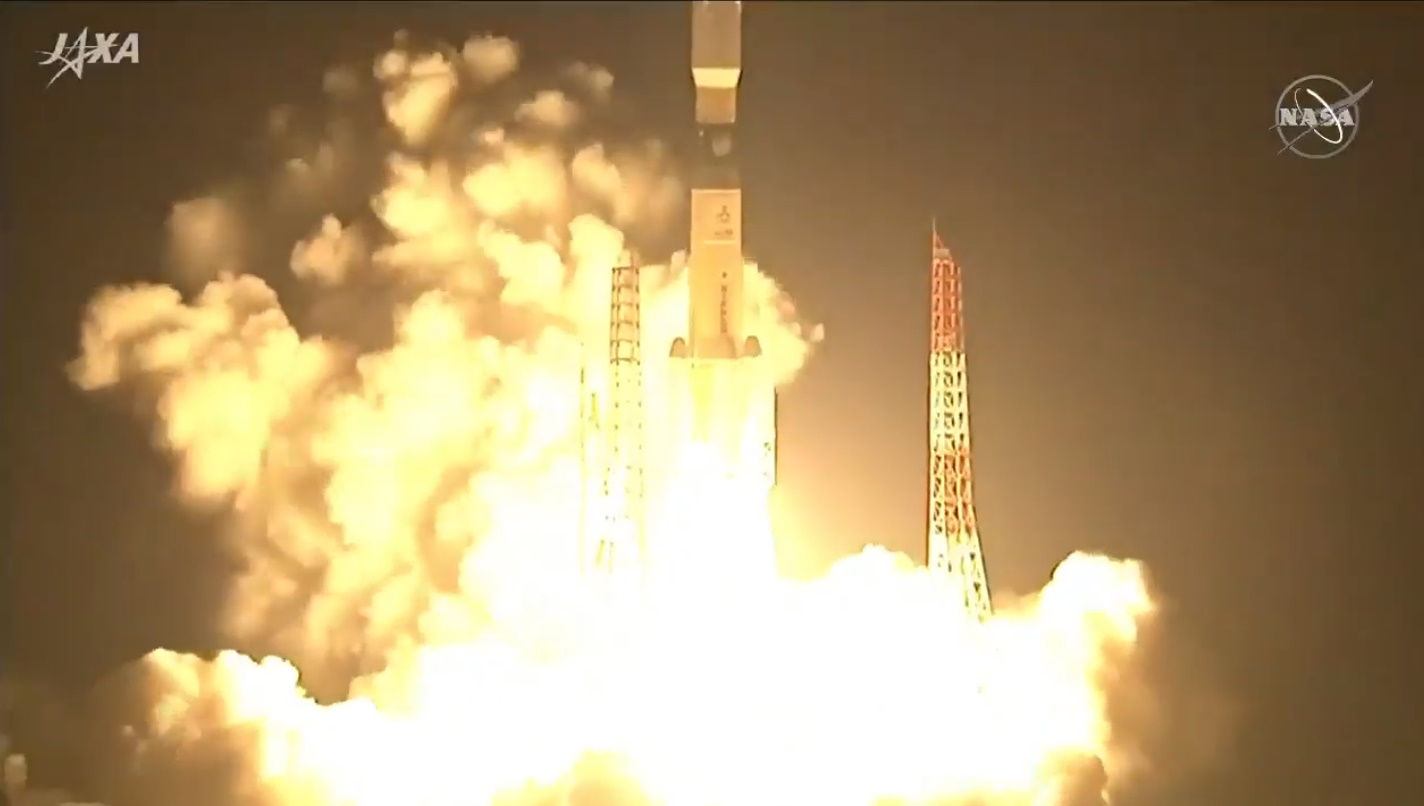 Japan’s H-IIB rocket conducted its final flight Thursday, launching the ninth and last H-II Transfer Vehicle (HTV) spacecraft to the International Space Station. Liftoff from the Tanegashima Space Centre was within an instantaneous window at 02:31 local time (17:31 UTC on Wednesday).

The H-II Transfer Vehicle (HTV) was developed by the Japan Aerospace Exploration Agency (JAXA) as part of its contribution to the International Space Station program. Like many Japanese spacecraft, it has two names, with its alternative name being Kounotori, or white stork.

The HTV-9 or Kounotori 9 mission concludes a series of resupply missions to the International Space Station flown by JAXA’s HTV over the last eleven years. This mission marks the ninth visit to the space station by an HTV spacecraft. Following its retirement, the next-generation HTV-X series is expected to begin launching no earlier than 2022.

The first Kounotori spacecraft launched to the International Space Station in September 2009, arriving at the outpost seven days later following extended on-orbit checkouts and demonstrations. Kounotori 1 spent 43 days at the space station. Seven more HTV spacecraft followed it with successful missions to the outpost, with HTV-9 marking the ninth and final visit.

Like the previous eight spacecraft, Kounotori 9 was built by Mitsubishi Electric. It is ten meters (33 feet) long and measures 4.4 meters (14 feet) in diameter. The spacecraft is equipped with four HBT-5 thrusters, built by IHI Corporation, which burn monomethylhydrazine and mixed oxides of nitrogen (MON-3, consisting of three parts nitrogen monoxide to 97 parts dinitrogen tetroxide). Twenty-eight smaller thrusters are used for attitude control and maneuvering.

The HTV spacecraft is designed for stays at the International Space Station of up to 45 days, plus five planned days of free flight before berthing and up to five days of free flight after departure. Power is generated by solar cells mounted on the vehicle’s exterior.

Most of the cargo in Kounotori 9’s pressurized section is contained within Cargo Transfer Bags (CTBs) stored in HTV Resupply Racks (HRRs). This includes supplies and provisions for the space station’s crew – including fresh fruit and vegetables – as well as replacement hardware and scientific experiments.

The Solid Combustion Experiment Module (SCEM) will be delivered to the ISS by Kounotori 9. SCEM will contribute to JAXA’s Flammability Limits at Reduced Gravity Experiment (FLARE), a project to improve fire safety standards for spaceflight. SCEM contains four experiments to investigate how fires can start and propagate in a microgravity environment.

The commercial Integrated Standard Imager for Microsatellites (iSIM) is a prototype imaging payload for future miniaturized satellite missions developed by Spanish company Satlantis. It is being flown under a contract with JAXA which will see the instrument deployed on a medium-duration exposed facility outside the station’s Kibo module. The camera will capture and downlink images of the Earth according to a schedule uplinked to it.

HTV-9 is also carrying equipment to support the Space Frontier Studio Kibo project, including bidirectional communications systems, which will allow JAXA to investigate how the Kibo module might be used for commercial broadcasting and interactive media activities. Also destined for the Kibo module is COSMIC, or Confocal Space Microscopy, a new microscope that will be installed to support bioscience experiments in the laboratory.

NASA payloads aboard the HTV include Basic Express Rack 11B (ER11B), built by Boeing in conjunction with NASA’s Marshall Space Flight Center. ER11B provides eight lockers and two drawers to house experiments, providing electrical and data connections, water and cooling to support each hosted payload. A new tank for the station’s water storage system, and a pressurized nitrogen refill tank for the Quest module’s Nitrogen/Oxygen Recharge System (NORS) are also aboard the spacecraft.

Kounotori 9’s unpressurized payload bay contains a pallet loaded with six replacement batteries which will be installed on the space station’s truss structure. Twenty-four new lithium-ion batteries have been launched across four HTV missions, replacing forty-eight nickel-hydrogen batteries. The new batteries delivered by this mission will be installed on the S6 starboard truss segment – the last part of the truss that has not been upgraded – with a series of spacewalks planned next month.

The last HTV launch also marked the final flight of Mitsubishi Heavy Industries’ H-IIB rocket that was developed to carry it into orbit. Derived from the pre-existing H-IIA, this rocket features a widened first stage with two LE-7A main engines in place of the H-IIA’s one. Its additional performance allows it to carry heavier payloads – such as the HTV – than H-IIA. All nine of the H-IIB’s missions – including Thursday’s launch – have carried HTV spacecraft and with future HTV-X payloads expected to use the forthcoming H-III rocket no further launches are planned.

Thursday’s launch took place from the Tanegashima Space Centre, located on the eastern coast of the island of Tanegashima, to the south of Kyushu – the southernmost of the main Japanese Home Islands. Tanegashima is one of two orbital launch sites in Japan, alongside the Uchinoura Space Centre. Larger, liquid-fuelled, rockets such as the H-IIA and H-IIB fly from Tanegashima, while Uchinoura is used for smaller solid-fuelled vehicles such as Epsilon and sounding rockets. 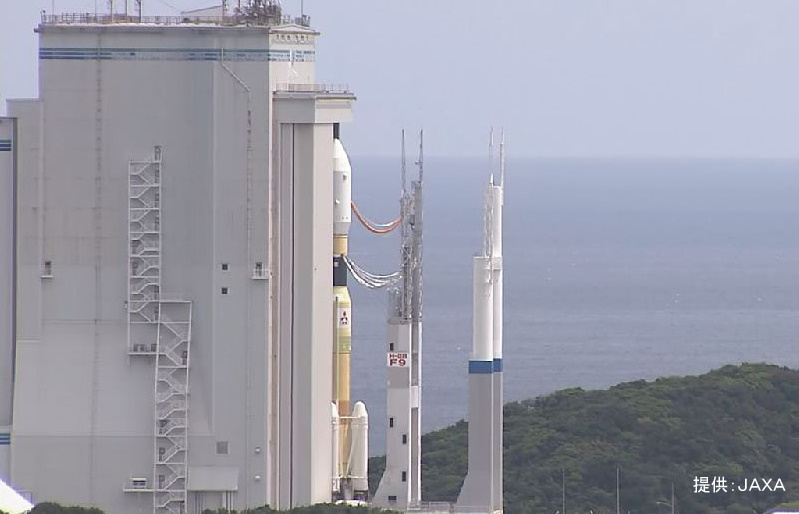 H-IIB shares its processing and launch infrastructure at Tanegashima with the H-IIA. The Yoshinobu Launch Complex has a single vehicle assembly building serving two launch pads. Pad 1 was originally built in the early 1990s for the H-II rocket, and continues to serve the H-IIA. Pad 2, which will be used for Thursday’s launch, was built as a backup H-IIA pad in the early 2000s and has been used for all of the H-IIB’s launches. Following this launch, Pad 2 will be modified for use by the H-III vehicle, which is expected to make its maiden flight towards the end of this year or early next.

Ahead of launch, the H-IIB rocket was stacked atop a mobile launch platform in the assembly building. The platform and completed rocket were then transported the 350 meters (1,150 feet) to Pad 2. Fuelling of the rocket will take place in the hours leading up to liftoff, as the countdown proceeds towards zero. The two-stage H-IIB rocket uses mostly cryogenic propellants – with both stages burning liquid hydrogen and liquid oxygen – although four SRB-A3 solid rocket motors provide additional thrust in the early stages of flight. Kounotori 9 sits atop the rocket, encapsulated in a 5.1-metre (16.7-foot) diameter 5S-H payload fairing which will protect it as H-IIB climbs through the Earth’s atmosphere.

The zero mark Japanese launch countdowns is termed X-0 – equivalent to T-0 for a western launch. About three seconds before zero, H-IIB’s two LE-7A engines ignited, followed at X-0 by ignition of the four solid rocket boosters and liftoff. H-IIB pitched over, assuming a south-easterly trajectory that took it out over the Pacific Ocean.

The SRB-A3 boosters burned for about 108 seconds, providing additional thrust as the rocket climbed away from its pad and through the lower regions of Earth’s atmosphere. About fifteen seconds after burnout one pair of boosters, on opposite sides of the first stage, separated. The remaining two boosters followed suit three seconds later.

After the boosters separated, both main engines on H-IIB’s first stage continued to fire. Once the rocket entered space, the payload fairing was no longer needed to protect Kounotori 9 and was jettisoned to save weight. Fairing separation occurred about 218 seconds into the mission, with the shroud splitting into two halves and falling away from the vehicle.

The second stage is powered by a single LE-5B engine. This made two burns during Thursday’s mission, the first to inject HTV-9 into low Earth orbit and the second to deorbit itself after payload deployment. The first burn lasted about eight minutes and eleven seconds. Sixteen minutes and forty seconds after liftoff, HTV-9 separated from the second stage. 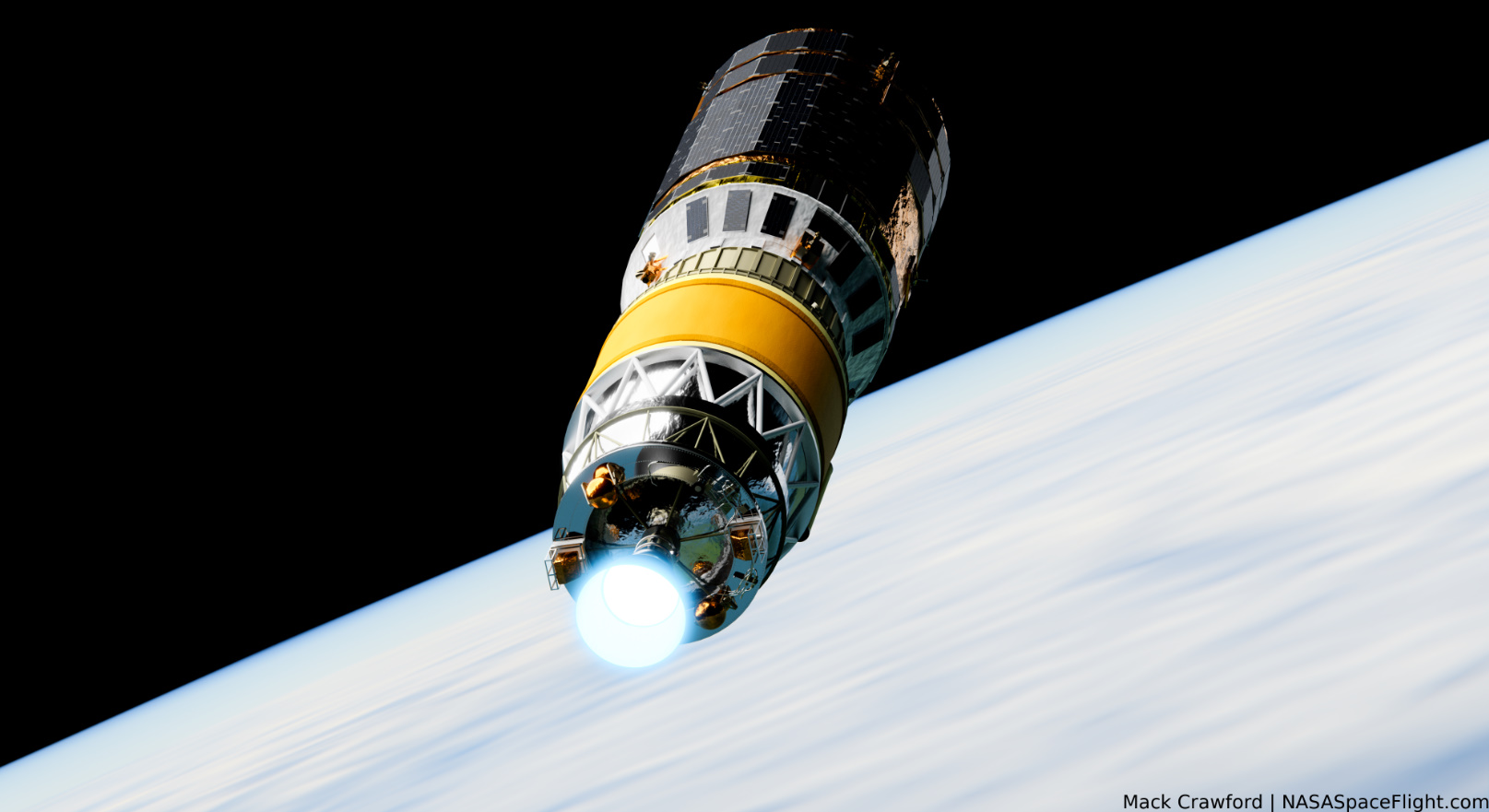 HTV heading into orbit, as envisioned by Mack Crawford for NSF/L2

After insertion into orbit, H-IIB’s role in the HTV-9 mission was complete. The Kounotori spacecraft will continue its own journey to the space station with a series of orbit-raising and phasing maneuvers over the next few days setting up a rendezvous on Monday.

After passing through a series of hold points at decreasing distances from the space station, Kounotori 9 will close to a capture point ten meters away from the outpost. Astronauts aboard the space station will use the CanadArm2 remote manipulator system to capture the spacecraft. This is scheduled to take place at approximately 12:15 UTC, with a backup opportunity on the following orbit if the operation cannot be completed before orbital sunset.

After capture is achieved, CanadArm2 will be used to reposition the HTV, and berth it at the nadir – or Earth-facing – port of the Harmony node module, via the Common Berthing Mechanisms (CBMs) on this module and the Kounotori spacecraft. HTV-9 is expected to be the last Japanese spacecraft to berth at the station – future HTV-X spacecraft will instead dock. 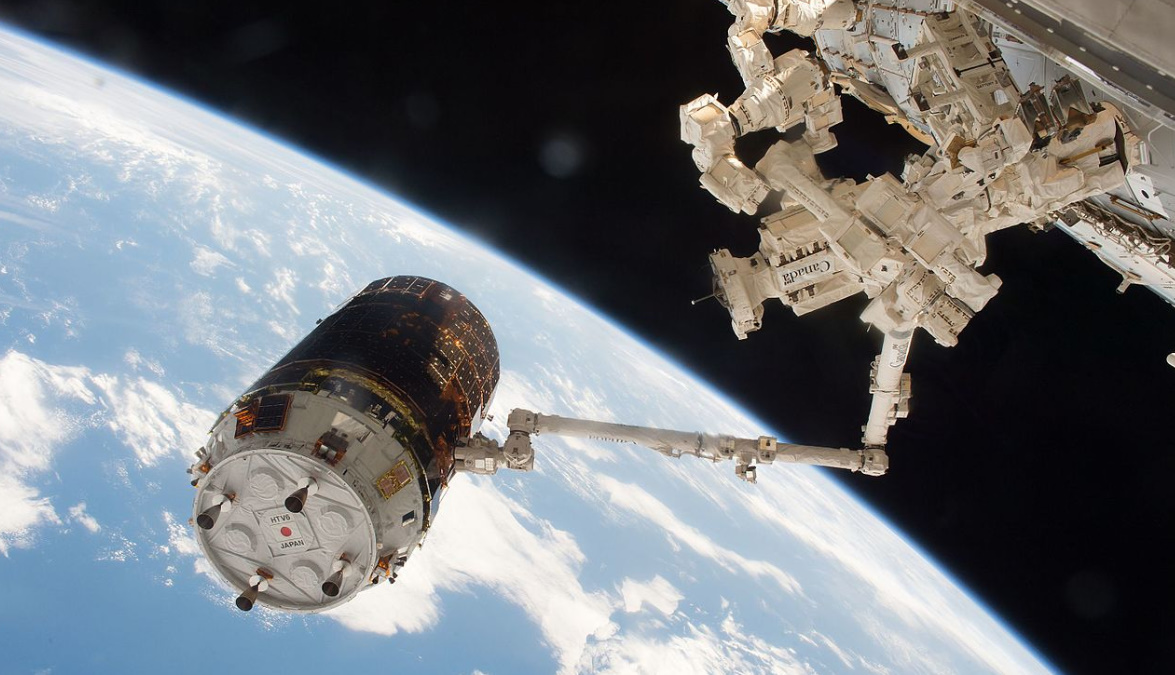 HTV grabbed by the SSRMS – via NASA

Kounotori 9 will remain berthed at the space station until mid-July. During this time the spacecraft’s cargo will be removed and replaced with hardware for disposal – including eight of the station’s old batteries.

When it is time for Kounotori to depart the berthing procedure will be repeated in reverse – the berthed spacecraft will be grappled with CanadArm2, unberthed and moved to its release position. After it is released, HTV will maneuver away from the space station before commencing a series of deorbit burns to ensure that it re-enters the Earth’s atmosphere over an unpopulated ocean region. HTV is not designed to be recovered, so the mission will end with the spacecraft burning up as it re-enters.

Following Thursday’s mission, Japan’s next launch is currently scheduled for 14 July, with an H-IIA rocket slated for a commercial launch that will deploy the Al Amal mission to Mars for the United Arab Emirates. JAXA’s next mission in support of the International Space Station is expected in 2022, with the first flight of the new HTV-X spacecraft.

The HTV is part of a fleet of spacecraft that support the International Space Station with crew and cargo transfers – alongside the Russian Soyuz and Progress spacecraft, the US commercial Dragon and Cygnus cargo craft and historically the European Automated Transfer Vehicle (ATV) and American Space Shuttle. The next mission to the International Space Station – currently due to launch next Wednesday – will inaugurate a new spacecraft into this fleet in the form of SpaceX’s Crew Dragon. The DM2 mission will be the second time a Crew Dragon has visited the station, but the first time it has flown with astronauts aboard.

One Step Closer to the Moon with the Artemis Program! ????The...

EGS Integration Console in the middle of Artemis 1 countdown...