All Hogwarts professors had something exceptional about them, but there's no denying that some Harry Potter teachers were more powerful than others. 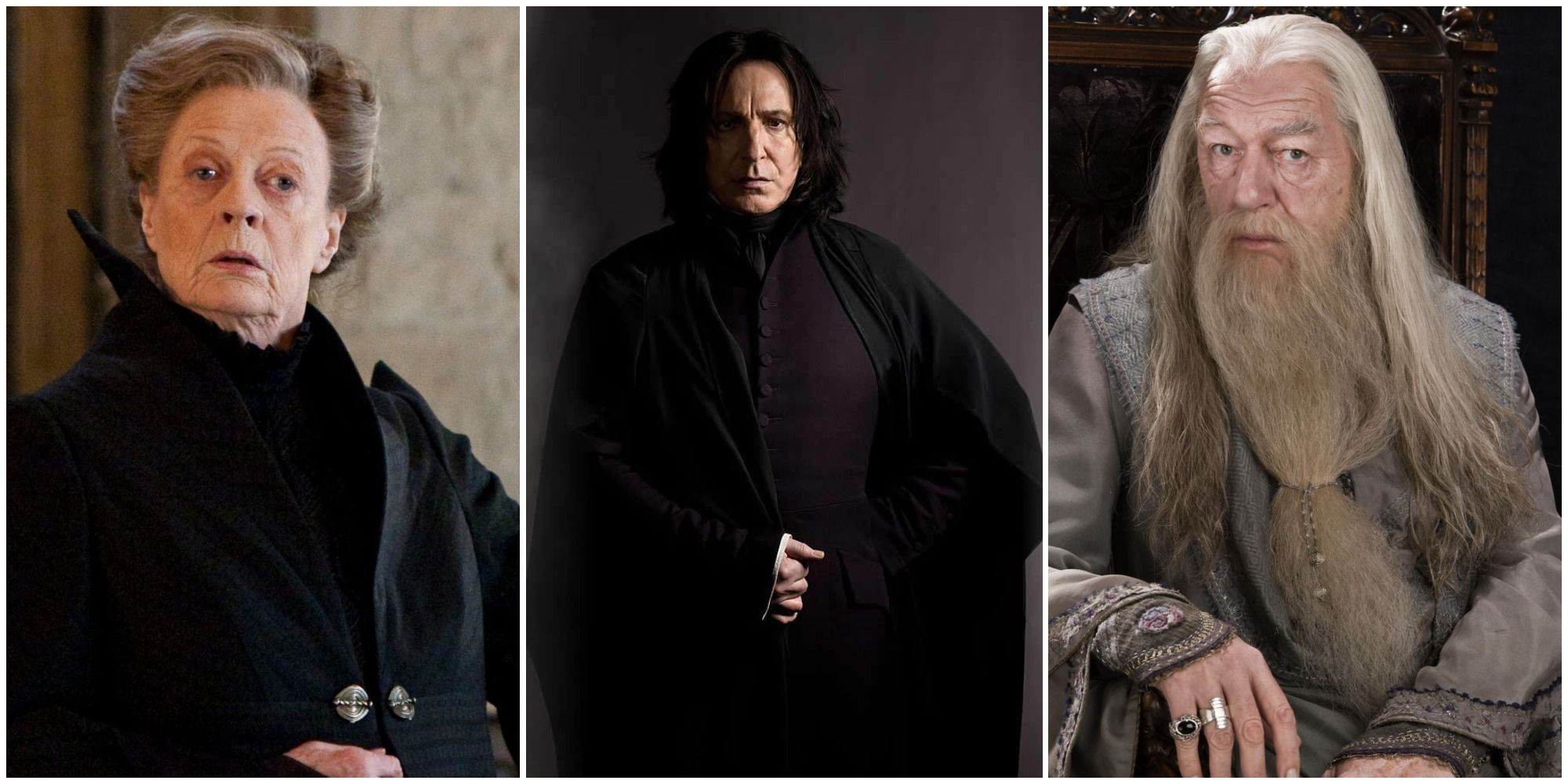 It's obvious to anyone even vaguely familiar with the Harry Potter universe that the professors at Hogwarts School of Witchcraft and Wizardry are among the strongest magic-users in the world. The battle royale in the Great Hall proves that these characters are not to be underestimated (ironic, because several defeated Death Eaters had actually studied under them.)

When it comes to their overall capabilities, the professors are easily categorized according to the power they wield — in terms of magical talent as well as administrative authority. As with any other group in the story, there are a few who exhibit a mastery over spellwork leagues above the rest.

Professor Sprout is an excellent Herbologist, but considering her field of research, one might assume that she prefers not to indulge in battle. This is partially true, but it's because of her generally peaceful demeanor, and says nothing about her actual savvy for spellwork.

In any case, the reality is that she stands her ground against both Snape as well as the Death Eaters in The Deathly Hallows. Neville is later added to her department, but she continues her job at Hogwarts for an unspecified time after.

As someone who failed to study more than three years of magic at Hogwarts, it's quite astonishing to watch Hagrid perform some truly spellbinding magic. What's more unbelievable is that he can do so with a broken wand sheathed inside his trademark umbrella.

Hagrid semi-transfigures Dudley into a pig and uses Aguamenti to great effect. Another important feature of his happens to be his Giant genetics, which magnifies his bodily strength enormously, not to mention provide him a certain degree of immunity towards curses and hexes.

Umbridge's malice is as clear as day from her actions, the least of which is torturing students for openly rejecting her version of events. Further, she miserably fails against the rebellions instigated against her by both teachers and students alike.

Nevertheless, Umbridge's mind is as sharp as a tack, evidenced by her future career as the leader of the Muggle-born Registration Commission. Interestingly, she is aware of how to manifest a Patronus, which is not an easy spell to master in the slightest.

Horace Slughorn may have come out of retirement at an advanced age, but he is no less spry than his colleagues. Lord Voldemort had been so impressed by his Potions Master, that he attempted to get him to change allegiances.

Not even Dumbledore is capable of breaking into his brain, regardless of the time-sensitive Horcrux information required. One of Slughorn's greatest accomplishments has to be at the Battle of Hogwarts, when he takes down several Death Eaters and keeps Voldemort at bay (albeit with the help of Shacklebolt and McGonagall.)

It is possible to imagine what kind of professor the real Alastor Moody would have been, if only through the incredibly believable performance given by Barty Crouch, Jr. (and a swig of Polyjuice Potion every few hours.)

RELATED: 10 Things About Harry Potter's Scar That Make No Sense

The Death Eater successfully "discombobulates" the Triwizard Cup, an overwhelmingly enchanted item, while consistently fooling Dumbledore and everyone at Hogwarts. Finally, there is the fact that he somehow accomplished the act of defeating Moody, one of the most powerful Aurors, himself.

Lupin's exceptional wizardry can be seen via his teaching methods — training his students to combat various forms of Dark Magic and Dark Creatures in a live setting.

When the Order rushes to the Ministry to save Dumbledore's Army from Harry's recklessness, he is one of three characters involved who doesn't receive a single injury. Lupin has shown himself capable of taking on the likes of Lucius Malfoy and Antonin Dolohov, although it must be noted that he is killed by the latter.

Filius Flitwick is often overshadowed by his more dynamic co-workers, but he's quite the talented wizard when it comes to it. In combat, he assists in expelling Snape from Hogwarts, together with Sprout and McGonagall, but his true achievements take form in the final battle.

He contrives to keep Voldemort and his numerous minions out of the castle grounds, with a protective charm that necessitates the Dark Lord's intervention to shatter. At the conclusion, Flitwick takes on and overpowers Antonin Dolohov, a Death Eater with marvelous magical talent.

Severus Snape's role as the Potions master, while filled with favoritism and student abuse, is well-deserved. However, it is his near absolute-control over the complexities of magic that make him one of the most powerful characters in the entire series, let alone as a professor at Hogwarts.

Harry stands no chance against him, as seen when he tries to attack Snape in revenge for Dumbledore's murder, only to be repeatedly knocked back. In the end, it is Voldemort's overconfidence that allows Snape to transfer the important fragments of his memory before dying of blood loss.

Minerva McGonagall, like Dumbledore, Voldemort, and Hermione, shone as the brightest pupil at Hogwarts during her time there. Interestingly, while many magic-users find themselves totally incapable of generating Patronuses, she can emit as many as three. Her fight with Snape as well as her creation of an army of armor are examples of her matchless skill.

Finally, her promotion to Headmistress is the only proof anyone needs to validate her position as the second-most impressive professor at Hogwarts. Her predecessor is the only school employee to surpass her, but he does so by a mile.

Speaking of the Headmaster, it's no surprise that he is the most powerful professor in the story, and it can easily be argued that this status can be given to him in general terms, as well. Dumbledore is nothing short of a magical genius, and has been ever since childhood: dazzling the halls and classrooms of the ancient castle in his school years as much as he does while working there.

In fact, it's likely that he knows more about the secrets of Hogwarts than any other character, even the Weasley Twins, indicating his incomprehensible perception. Finally, there's the fact the Dumbledore is "the only wizard Voldemort had ever feared."

NEXT: Retro-Cast: If Harry Potter Was Made In The 1980s

Which Character From The Rookie Is Your Soulmate, Based On Your Zodiac?