Harry Potter: Young-Adult Franchises That Tried And Failed To Be The Next Harry Potter

Harry Potter has built a strong legacy and an enduring fanbase. So much so that other studios wanted to capture the same level of fame, only to fail. 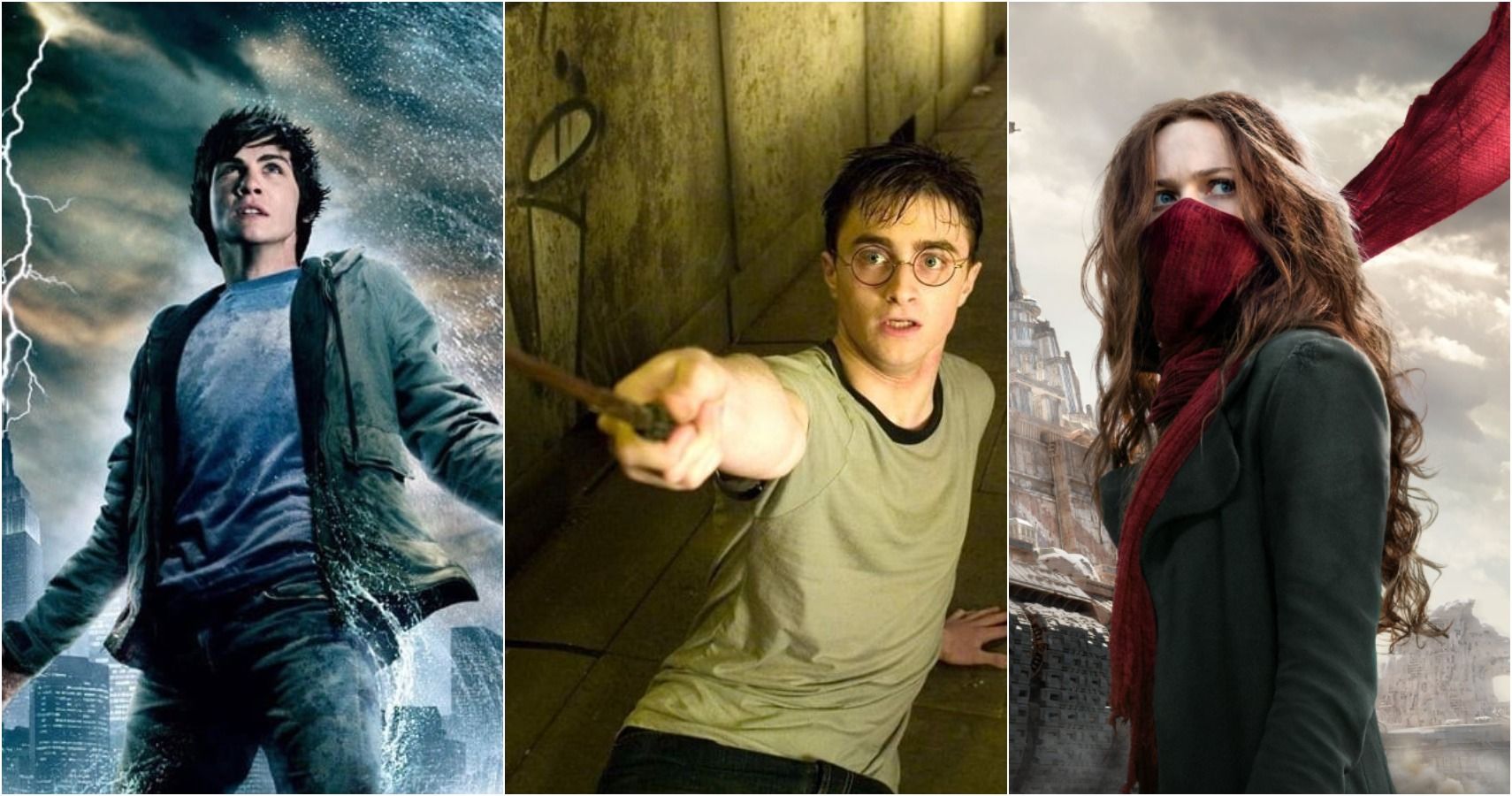 Harry Potter has built a strong legacy and an enduring fanbase. Besides the spinoff series, the eight-film series centering on the boy wizard has touched many fans and viewers. So much so that other studios wanted to capture the same levels of the Wizarding World, only to find less success.

RELATED: 10 Other Shows & Movies You Didn’t Know The Harry Potter Cast Has Been In

But mostly, these attempts at young-adult fantasy franchises came off like a lead balloon and the result was only salt in the wound for the YA genre. With that in mind, here are the 15 franchises that tried and failed to be the next .

Updated June 29th, 2020 by George Chrysostomou: The young adult film genre is a massive and profitable area within Hollywood, but not every franchise within this category quite goes to plan or reaches the heights that they are expected to. Here's a few more franchises that didn't perform like they should have.

The Divergent series was initially met with a lot of fanfare when it was announced that the popular novels with the same name, would be adapted to the big screen. The series even managed to bag big up and coming stars like Shailene Woodley.

Despite the success of the books though, the films were met with a lot of criticism. They were poor adaptations of the written work and became so unpopular that the series couldn't even be finished in film.

The Darkest Minds is yet another take on the superhero genre, although the novels managed to spawn many sequels. The excellent storytelling on the page never managed to translate to the film.

With directorial and writing issues the film adaptation didn't really have a solid direction. What's more, due to poor marketing and a bad critical reception, The Darkest Minds really went unnoticed.

Alex Pettyfer has been involved in a few different young adult franchises that have flopped in various ways. Much like some of his films later on this list, I Am Number Four is largely forgotten.

RELATED: 10 Recent YA Series We Want To See Adapted

With sequels seemingly off the table, it's fair to say that this science-fiction drama really didn't have the bite it needed. Despite involving aliens, superpowers, and grand adventures it wasn't really good enough to gain a big following.

Many fans may seem confused as to why The Maze Runner films are on this list. They were for the large part a commercial and critical success and did a pretty competent job of adapting the story told in the well-received novels.

In many ways, this had all the makings of becoming the next Harry Potter and yet it didn't. Whereas franchises like The Hunger Games managed to grab an audience's attention in the same way, it seemed The Maze Runner had diminishing returns as it went along, finishing on a whimper.

Another film franchise that might feel like a confusing addition to the list, the Fantastic Beasts films, is, of course, based within the Wizarding World that Harry Potter came from. These two things are not alike though.

The initial Fantastic Beasts And Where To Find Them managed to capture the imagination of that same audience, but not quite as strongly as Harry Potter. Unfortunately, its sequel, The Crimes Of Grindelwald was a critical disaster, leaving the future of the franchise uncertain.

Based on the novels by Daniel Handler, under the pen name Lemony Snicket, A Series of Unfortunate Events revolves the perturbed lives of the Baudelaire children – Violet, Klaus and Sunny – as they transfer from one guardian to another to take care of them after their parents are killed in a fire. In pursuit of their inherited fortune is Count Olaf (Jim Carrey).

The film adapts the first three books and crams them to a tight two hours, which is fine, but it does not give leeway for enough character development. No wonder this is better suited as a Netflix series.

This is a rare blockbuster, mostly backed by British production, and the source material by Anthony Horowitz is described as “Harry Potter meets James Bond.” It centers on a teenager named Alex Rider (Alex Pettyfer), who follows in the footsteps of his uncle to become an MI6 agent and stop a billionaire (Mickey Rourke) from unleashing a virus via a computer OS named Stormbreaker.

Whether as a spy movie or a young-adult movie, it fails to be convincing and interesting. His hero’s journey feels dull, as it throws away any novelty that makes the books compelling.

Nobody knew that a movie entitled Cirque Du Freak: The Vampire’s Assistant existed back in 2009, as it was a commercial and critical failure. First off, Darren Shan’s Vampire Blood has a niche fanbase, so the attempt at a franchise would have required a unique vision. Not only that, but the film was overshadowed by the joint dominance of the Harry Potter and franchise at the time.

RELATED: 10 Movies Where The Vampires Are The Good Guys (Ranked, According To Rotten Tomatoes)

The second issue was the dull execution. The movie centers on teenager Darren Shan who needed to fulfill a pact by turning into a vampire and joining the ranks of a freak show circus. How could this be boring?

As a lesson to any studio, do not adapt obscure source material by completely obscuring the source material. Case in point: 2015’s bomb Seventh Son. Based on the first book of The Wardstone Chronicles, this dark fantasy centers on a boy named Thomas Ward (Ben Barnes), who discovers he is the “seventh son of a seventh son” and places himself as an apprentice to a fellow warrior (Jeff Bridges).

Setting the complex plot aside, there is nothing to offer in this dark fantasy that has not been done before in film and TV. It is a dreary, sluggish CGI exercise.

6 The Seeker: The Dark Is Rising

The Dark is Rising is a series of fantasy novels by Susan Cooper about warriors of “Light” destined to stop the forces of “Dark”. To kick off an “excitable” franchise, 20th Century Fox started with the second book, The Seeker. The story is about a pre-adolescent Will Stanton who learns that he is an “Old One”, or the “seventh son of a seventh son”.

Instead of an adventure series that unlocks the world before them, Fox established this as a brooding young-adult franchise, centered on a brooding teen’s quest for magical items. No wonder fans ditched this as a bomb.

Moving along from fantasy to the science-fiction genre, we have . Based on the Orson Scott Card bestseller, this sci-fi space adventure centers on Ender Wiggin (Asa Butterfield), a young space cadet who has exhibited excellence in field training and is recruited into a more advanced program, headed by Colonel Hyrum Graff (Harrison Ford), to prepare for an alien invasion.

Unlike the other entries on this list (except for Unfortunate Events), Ender’s Game showed potential with its cast and visuals. However, its derivative "chosen one" story is a tiring cliché and it does not stand out in the overcrowded 2013 sci-fi market.

Peter Jackson found himself in a dry spell after the polarizing The Hobbit series and the dismal failure of Mortal Engines. Based on the steampunk young-adult novel series by Philip Reeve, this film is an uneven mix of Star Wars, Mad Max: Fury Road, , Howl’s Moving Castle, The Lord of the Rings, and other blockbusters. Thanks to that, the story is secondary to the spectacular visuals of the colossal mobile cities.

But in this context, no characters come off as notably remarkable. And the non-chemistry between Hera Hilmar’s Hester and Robert Sheehan’s Tom makes the mobile cities more likable.

20th Century Fox had some big shoes to fill with any attempt to adapt a young-adult fantasy novel series into the next Harry Potter. But in 2006, the studio adapted Christopher Paolini’s first book of his Inheritance Cycle series with . Ed Speleers plays the titular character who houses a giant egg that contains a dragon that hears his thoughts. His bond with the dragon, Saphira (Rachel Weisz), leads him to realize his true destiny.

Like any bland YA fantasy adaptation, the film is criticized for its unfaithfulness to the source material and bland execution of an expansive world.

Back in 2007, New Line Cinema attempted to redo their Lord of the Rings magic with Philip Pullman’s fantasy series, His Dark Materials. The source material itself is polarizing in its reception, but a dedicated fanbase. So, it doesn't help when the film didn't impress anyone, besides winning an Oscar for Best Visual Effects.

RELATED: His Dark Materials: Things The Show Changes From The Golden Compass Books

What it had in visuals it lacked in strong storytelling and the end result is a generic young-adult fantasy that lacked in certain themes and failed to provide clarity in its world-building. Thankfully, the HBO series proved justified.

Lastly, the young-adult movie franchise that had the most resemblance to Harry Potter is definitely the franchise. In its two films, The Lightning Thief and Sea of Monsters, 20th Century Fox attempted a huge Potter-esque rip-off, even hiring Sorcerer’s Stone director Chris Columbus as the producer/director of the first film.

While there are occasional moments here that stand out, the two films are obvious Harry Potter clones, only with Greek mythology blood. We have the "chosen one" son with an affectionate mother and a deadbeat stepparent. The training ground for teenagers with special abilities. The quipping best friend. The redheaded girl genius. The secret rival. The hidden passages around the world. The battle between good versus evil.

The clichés are all there. Yet, they destroy the spirit of Rick Riordan’s charming book series. Thus, it explains its lackluster quality.

NEXT: 5 Reasons Why Harry Potter Is A Generation's Definitive Young Adult Saga (& 5 Why It's The Hunger Games)

Pearl Jam Remember the 2000 Roskilde Festival Tragedy: ‘Nothing has Been the Same...

For the second month in a row, perhaps not entirely surprisingly, Airbus’ deliveries...

The parents of a young boy found wandering a quiet NSW Central Coast street in his...

If you have been to the movies, rented a DVD or watched a series on a streaming...

Mental Health Memes For Anyone Trying To Cope With All...

We're all dealing with a lot of sh*t right now, some more than others. We can't...

Doug Ford says businesses can refuse anyone not wearing...

Businesses should be allowed to refuse service to anyone not wearing a mask during...

The last we heard Nkosazana Dlamini-Zuma wanted to have a ‘talk’ with the ‘When...

North End Dog Park Reopens 6 Weeks After Closing Due To...

A dog park in Boston's North End reopened Tuesday, about six weeks after it was...

As job losses pile up during the pandemic CBS 2 is Working For Chicago to help you...