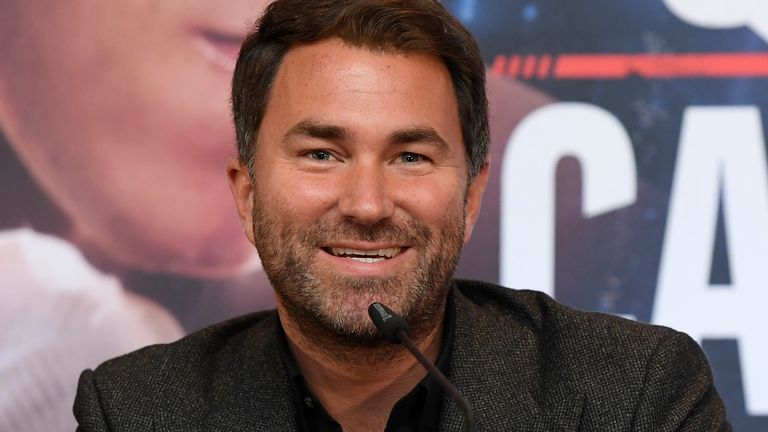 Heavyweight world champion Anthony Joshua’s promoter Eddie Hearn is planning to organise fights in his own back garden when professional boxing returns in July from the COVID-19 lockdown.

“It is a huge mission. We are going to turn our headquarters here into an outdoor venue for live boxing, with a full canopy in the middle of the garden and the ring overlooking London,” said the Matchroom boss.

“Just imagine it. It is summer, the house is all lit up, you can see Canary Wharf in the distance and fireworks are going off. Then over the hill walk Dillian Whyte and Alexander Povetkin for a massive tear up on my lawn.”

The British Boxing Board of Control (BBBofC) has said it hopes to resume professional boxing in Britain in July but with strict conditions and no spectators.

The board’s proposals, which are still being discussed, include boxers having to wear face masks during ring walks and being banned from using an open spit bucket.

Whyte and Russian heavyweight Povetkin were due to fight in Manchester on May 2 for the WBC interim belt but that was postponed when the BBBofC banned all fights due to the COVID-19 pandemic.

The Mail said Hearn’s plan was for an all-British title bout between women’s WBC super-featherweight champion Terri Harper and Natasha Jonas in mid-July leading up to an August clash between Whyte and Povetkin.

“We are building changing rooms for the fighters, setting up a space for a ring walk, and figuring out how we can do everything you need for this kind of production with as few people as possible,” said Hearn.

He said a nearby hotel could be used as a holding camp, with everyone involved only cleared to enter the mansion once they had tested negative.

“To do a contact sport in a studio or a confined gym with everyone sweating about, isn’t great,” Hearn told the newspaper. “This feels cleaner and safer and it will look sensational, with the drones flying over the premises.

“It will give the fighters that big event feel… it won’t be great for the grass but hopefully it will be very good for boxing.”

Read more:
Hearn set to organise professional boxing bouts in his own back garden

5 of the Most Popular Digital Marketing Trends in 2020...

Your lifeline to moving forward with international trade

Where to find your small business coronavirus grant