On the market for $1.35 million, this former Methodist church in Pennsylvania has been converted into a cool modern home, with plenty of space for creativity. The post Heavenly Church Conversion in Pittsburgh Needs Buyer To Give It an Amen appeared first on Real Estate News & Insights | realtor.com®. 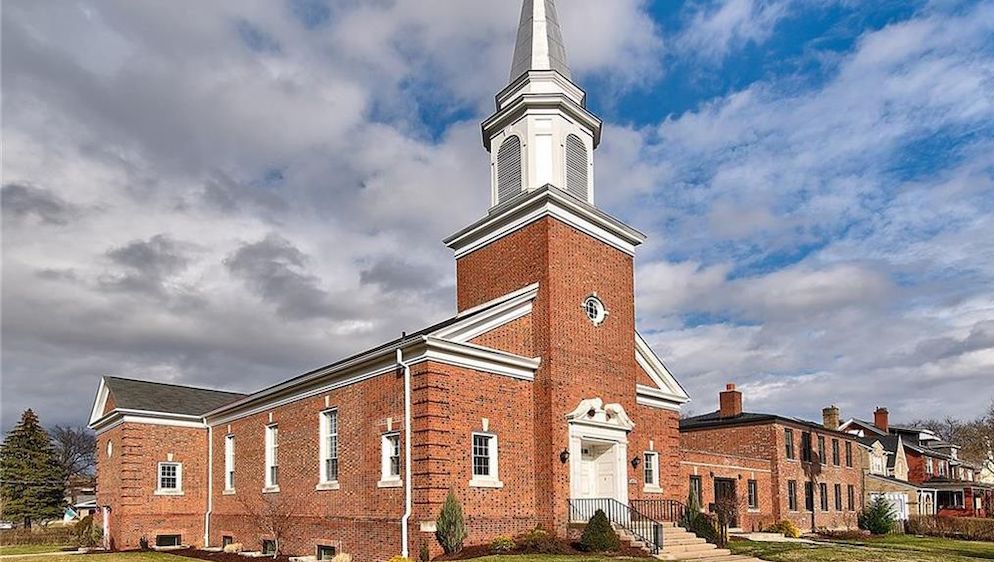 A three-bedroom home that’s the product of some divine intervention is available in Pittsburgh for $1.35 million.

The structure on Stanton Avenue was formerly known as the Stanton Heights United Methodist Church. Built in 1933, the church closed its doors for good in April 2012.

A couple relocating from California scooped up the unique Pennsylvania property for $250,000 in 2015.

They recognized that the large space could afford them room both for an art studio and a recording studio. They spent a couple years converting part of the enormous structure into a modern living space.

When the church was built, nearly a century ago, it didn’t have its signature steeple.

“The original structure was the place that you see now set up as the home,” says the listing agent, Conrad Waite, referring to the large building to the right of the chapel.

“Then the congregation raised money to build a more traditional chapel,” he says.

The original church was then turned into a school and eventually the rectory, where the priest lived.

The couple’s conversion project has turned part of the building into living quarters that are minimalistic, modern, and airy. The living spaces are clean and white.

“I was blown away by the vision [the seller] had. It feels big, but the way the space is utilized, you don’t really ever feel lost or overwhelmed,” Waite says.

In total, the available living space is a whopping 13,300 square feet, on just more than half an acre. At the current asking price, the space is going for roughly $100 per square foot.

Although the hulking space wasn’t designed as a single-family home, the agent tells us, the way the space is laid out makes it feel much more comfortable than you might expect.

The owner’s girlfriend, he notes, used the main chapel as an art space, while the owner installed a recording studio in what used to be the dining or meeting area on the floor below.

A custom staircase is the focal point of the living space, and a large kitchen features quartz countertops and stainless-steel appliances.

The primary suite takes up an entire floor and has big windows, two dressing rooms, a double vanity, a soaking tub, and a stand-alone shower.

There is a private laundry in the guest suite, as well as a large bedroom and bathroom.

“All of the finishes in the main house for the living area are beautiful and high-end,” Waite says.

The main chapel and a few other areas aren’t completely finished—which leaves a buyer with a number of options.

The sellers are planning to relocate to a warmer climate and haven’t had a chance to finish all of the outdoor renovations they had originally planned, which included adding a pool, some trees, and a cabana, Waite says.

While a lot of work has taken place over the last five years, the next owners still have decisions to make, Waite says.

“I’ve never been part of a listing on a house that felt more finished,” he says, “but also waiting to be finished to somebody else’s choices as well.”

A separate free-standing guesthouse on the property has three bedrooms and one bathroom, which Waite says is typical of the other homes on the block.

Waite notes that the location of the home is one of its strong counts, close to Bakery Square and Lawrenceville in the heart of Pittsburgh.

If the house was in either of those neighborhoods, he says, it would probably fetch “a million dollars more, especially with the size of the house. What you get is the connection to everywhere else in the city.”

The post Heavenly Church Conversion in Pittsburgh Needs Buyer To Give It an Amen appeared first on Real Estate News & Insights | realtor.com®.

Restored and Revamped, Neutra’s Glen House in Connecticut Is Listed for $4.5M

12 Ways to Reduce Indoor Allergens in Your Home

Shortfall in New Supply of Homes for Sale Felt Most Acutely...