Henry, Rooney, Kompany and other Lampards In Waiting 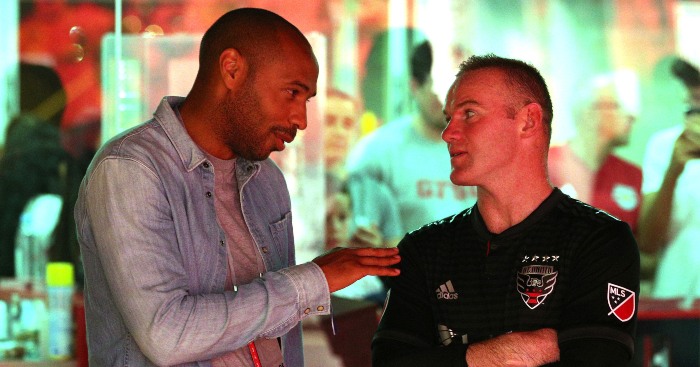 It’s been three days and I think most of us are still trying to come to terms with the fact and Frank Lampard has disgracefully been sacked just for being quite rubbish over an extended period.

With it’s surely only a matter of time before another proper manager who knows the club is brought in to achieve the success Frank Lampard was cruelly denied by Roman Abramovich’s itchy trigger finger and definitely not in any way by his own shortcomings.

But it’s not just Chelsea who have gone down the route of appointing an entirely unqualified club legend as manager. Other big clubs have tried it before, two are persisting with it as we speak, and it’s only a matter of time before others dip their toes in these murky jobs-for-the-boys waters once again.

So let’s take a look at a few of the current Lampards In Waiting dotted around the place.

Thierry Henry (Arsenal)
Arsenal have already gone down this road in a way, although Mikel Arteta would truthfully fall some distance short of ‘club legend’ status for his worthy yet workmanlike years of service as a player. That’s not true of Henry, who might even be the very greatest of all Gunners and would, most importantly, be an absolute calamity of a manager at the Emirates given how it’s gone elsewhere.

Brilliantly, Henry has succeeded in instantly proving himself precisely the manager everyone would have expected: fatally and irretrievably flawed by a state of near-constant bafflement, confusion and ultimately anger that all the other footballers he now has to coach are nowhere near as good as he was. A French Hoddle. It needs to happen.

John Terry (Chelsea)
Sobering thought for Chelsea that Lampard wasn’t even the worst one. This one is probably 18 months away. Two-and-a-half years tops. Managerial appointments tend to follow a pattern where each appointment acts as a counterpoint to the previous one. Like relationships. Tuchel as contrast to Lampard is absolutely ideal, of course, even if , and Terry will be the perfect counterpoint to Tuchel when his nerdish ways leave Chelsea languishing in fourth place and the press pack run him out of town. Chelsea have lost their identity, they will say. They need passion, someone who Knows The Club. Enter Terry, in full kit.

Phil Neville (Everton)
Arteta definitely will be Everton manager one day, and probably quite a decent one we reckon. The same is true of Inter Miami’s Phil Neville. Apart from the ‘quite a decent one’ bit. He’ll be rubbish. But having definitely not used the England Women job as a stepping stone, he’ll definitely not use his MLS job as a stepping stone and he’ll definitely not rock up at Goodison promising all sorts before departing five months later with the team languishing in 15th with absolutely none of his former team-mates in the media offering a word of criticism.

Steven Gerrard (Liverpool)
Obviously. Written in the stars, but might possibly not be the disaster everyone would have naturally assumed. Doing some distinctly eye-catching things with Rangers right now, but sadly for everyone (apart from Rangers fans) can’t take the Liverpool job just yet. Firstly because they already have quite a good manager at the moment but far more importantly, as we all know…

When one goes, the other has to sayhttps://t.co/IPEHNwJd7V

Vincent Kompany (Manchester City)
Manchester City have proven pretty resistant to this specific brand of nonsense since their elevation to the big time. But could Vincent Kompany finally be their next Stuart Pearce? Fulfils all club legend requirements and then some. Arguably even more so than Pearce. Crucially, is hugely respected in this country so being a bit foreign shouldn’t hold him back too much. Has currently steered Anderlecht to fifth spot in the Jupiler, 14 points off the pace set by Club Brugge. Which feels a bit underwhelming. But one good season in Belgium might be all it takes to earn Kompany a disappointing, legacy-diminishing 18 months in the Etihad dugout.

Wayne Rooney (Manchester United)
Vastly successful club legend and record goalscorer returning as manager via a stint in charge at Derby, is it? A fool-proof scheme in which literally nothing could possibly go wrong. The laws of managerial appointments mean Rooney cannot directly follow Solskjaer into the Old Trafford hotseat, but 18 months of someone sensible who isn’t Fergie should be more than enough of a buffer.

Ledley King (Tottenham)
Spurs have tried the former player approach over the years. Results, you would have to say, have been mixed. For every Bill Nicholson, a Tim Sherwood. For every Terry Venables, a Glenn Hoddle. I will, incidentally, argue until my dying breath that Ossie Ardiles’ Spurs were years ahead of their time and if the club had just held its nerve great things would definitely have happened. Must also accept I’m in the minority on that one. Anyway. Ledley King. An interesting one. A superb player but not one who had ever shown much inclination towards coaching when his knees finally forced him into retirement. Became a ‘club ambassador’ when Spurs understandably sought to do right by him, and you can’t imagine they didn’t offer him a more meaningful coaching job at the time. Now suddenly in Jose Mourinho’s first-team coaching set-up and that means there are two things of which we can be sure: a) will be handed the reins on an interim basis when Jose eventually huffs off or is huffed off in roughly 12 months’ time; b) will be rubbish.

The post Henry, Rooney, Kompany and other Lampards In Waiting appeared first on Football News -.

Bournemouth 0-0 Crystal Palace: Cherries through after...

Liverpool target can ‘force his way’ into Klopp’s team