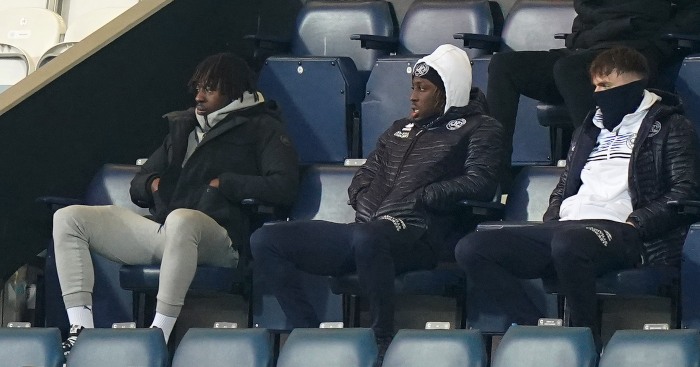 The 22-year-old attended former club QPR’s FA Cup tie with Fulham on Saturday and failed to wear a mask at all times while at Loftus Road.

Eze was also not socially distanced, with just a seat between him and another person in the directors’ box.

A statement from Palace on Monday insisted they would deal with the matter internally, with the incident occurring a week after captain Luka Milivojevic was fined for mixing with Aleksandar Mitrovic and his family on New Year’s Eve.

MAILBOX: Man Utd aren’t going to win the title, they will be given it…

“When he realised what he did – naively I must point out and without any malice – he was full of remorse, regret and wanted to take responsibility and apologise to everybody,” Hodgson said.

“Do I think the foolish thing Eberechi did merits that he should be left out of the team and punished in that way? I don’t.

“I don’t think what he did would merit that type of punishment, but it does merit a fine because a slap on the wrist isn’t really enough.”

Palace were unaware the summer signing planned to return to his old stomping ground and QPR boss Mark Warburton conceded his club made an error in accepting Eze’s request to attend.

Hodgson added: “It was a lot of naivety on his part to think it was OK to do those things. It obviously isn’t and we are very upset and a bit disappointed too he wasn’t stopped from going and I know QPR have done well in that respect.

“They have taken responsibility because had we known he planned to do that, we would have stopped it.

“He has apologised and will learn a harsh lesson from it.”

Eze will relish the focus being back on football this week and another player who signed in 2020 is close to agreeing a new deal at the club.

Nathaniel Clyne returned to Selhurst Park in October and is on the verge of finalising a longer contract, with his existing terms set to expire at the end of January.

“I am led to believe it is very close now to Nathaniel signing so that doesn’t worry me that one,” Hodgson insisted.

Palace do have a number of other players out of contract this summer, including goalkeeper Vicente Guaita and defender Gary Cahill, but their long-serving manager is not too anxious.

He said: “I know the chairman (Steve Parish) and the sporting director Doug Freedman are aware of the situation and working hard to try and find the right solutions when it comes to the players out of contract.”

Cahill will be back for the trip to Arsenal, but centre-back Mamadou Sakho is set for a spell on the sidelines after he sustained a thigh injury in Friday’s FA Cup loss at Wolves.

The Eagles have not lost to the Gunners in almost three years, but will face a resurgent side, with Mikel Arteta’s men triumphing in their last four matches after previously being on a seven-game winless streak in the Premier League.

Hodgson admitted: “I never really expected them to do anything other than recover from the unfortunate start they had.

“If you look at the squad, the way Mikel has been working with them, the way they play and their principles plus the quality of the club, I never expected anything other than sooner or later for them to come back to the Arsenal we know and expect them to be.”