American people standing up to the Soviets! America needs Nixon! These were some of the tag lines attached to this photo during Nixon’s presidential campaign in 1960. But behind every picture, there is a story. And this is one of those photos where the story is just as good as the picture. How many times […] 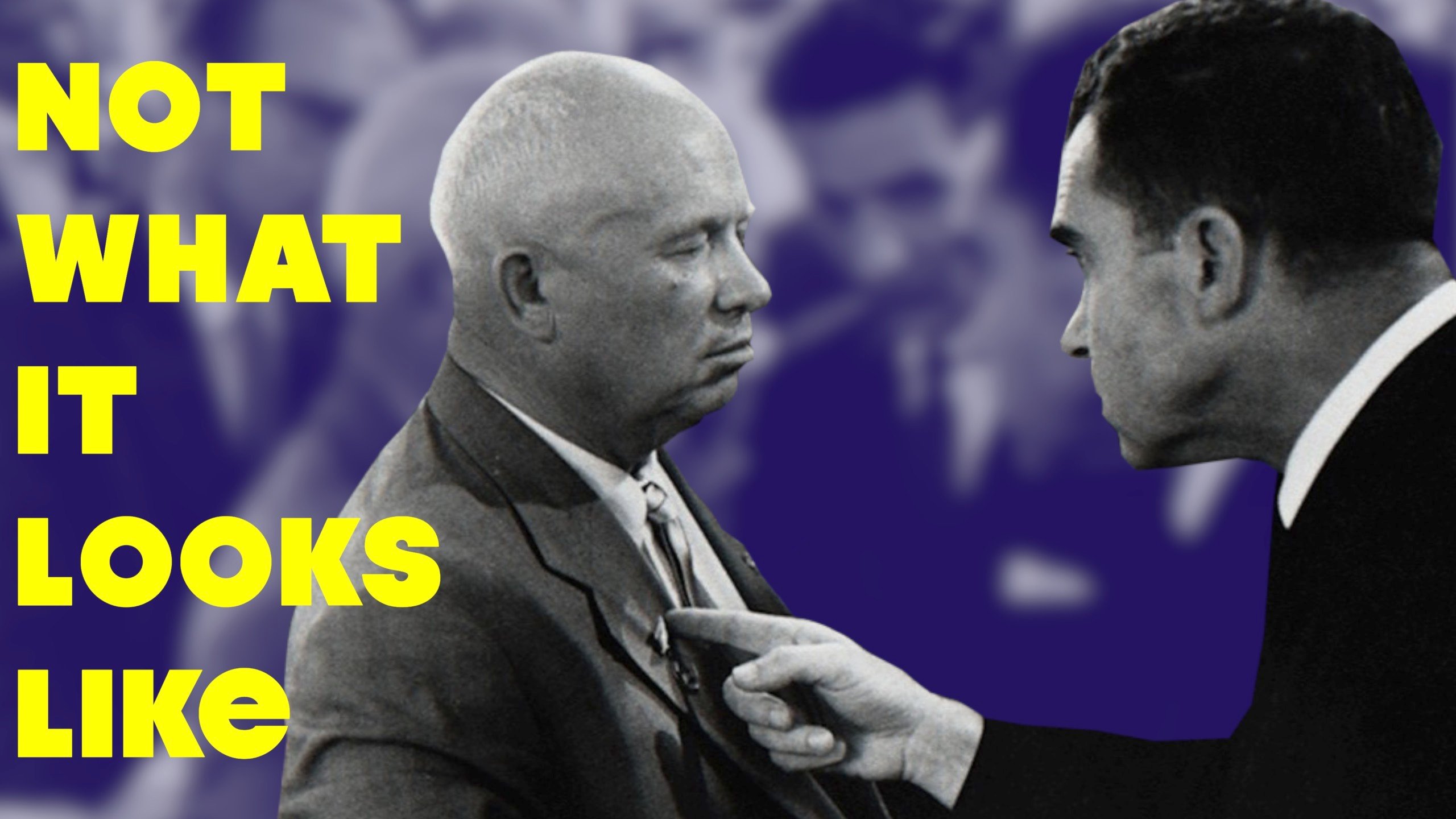 American people standing up to the Soviets! America needs Nixon! These were some of the tag lines attached to this photo during Nixon’s presidential campaign in 1960. But behind every picture, there is a story. And this is one of those photos where the story is just as good as the picture.

How many times have you heard the phrase: “truth is in the eye of the beholder”?

We’ve seen it many times in the history of photography and photojournalism. Some photographs are just not what they appear to be. Sometimes the composition is corrected later in the post, sometimes pictures of casual moments are staged, and sometimes the story behind the photograph is completely different from the reality that the photo purports to portray.

The medium of photography represents the vision of the artist as they capture a two-dimensional representation of their three-dimensional reality. But for the viewer, looking at a photo is ultimately an act of interpretation: it is never purely objective, and often needs additional explanation.

It’s true, sometimes a good photo needs no explanation. However, in photojournalism, it is often crucial to describe the situation so the picture is not misinterpreted. And it’s the photographer, is the author of the photo, who should be the final authority when it comes to sharing their story.

But what if the story of your photograph was hijacked and misinterpreted? What would you do? That is actually what happened to Elliott Erwitt: the French-born American photographer known for his advertising and documentary photography was put into a situation where his story was flipped upside down and used as a campaign slogan.

It was July 24th, 1959 when the then Vice President Richard Nixon visited the American national exhibition in Moscow. The exhibition was showcasing American art, fashion, cars, model homes, kitchens, and more in “Typical American Houses”. It was basically introducing the American lifestyle to a wider public in Soviet Russia.

The now famous kitchen debate happened in the house called Splitnik, which was created from the words “split” and Sputnik (Sputnik being the famous satellite the Soviets had launched into orbit two years earlier). It is here in Splitnik that Elliot Erwitt captured the now-iconic moment between Nixon and Khrushchev.

The photograph happened in typical Erwitt fashion. He was in Moscow working for Westinghouse Electric, taking pictures of refrigerators and their installation for Macy’s kitchens.

“When Nixon famously wagged his finger at Khrushchev, nobody from the media was there. Only me,” recalled Erwitt. “I happened to be at the right place at the right time. I was in the kitchen free to move. it was like shooting fish in a barrel.”

This seems to be a recurring theme in Erwitt’s photography. As he once famously proclaimed:

The best things happen because you just happen to be somewhere with a camera. Some of my colleagues in Magnum go to places on purpose to do news, but the historic pictures I have made have been by sheer accident.

Nixon’s staff would use this photograph during his presidential campaign to show Nixon standing up to the Soviets, when in reality they were actually discussing something completely different at that moment. The argument was about cabbage soup vs. red meat…

As you can see, this moment was… twisted a bit… to try and help Nixon in his campaign. A campaign he ultimately lost to JFK.

The whole story comes to light when we look at the contact sheets; it actually seems as though the discussion was rather friendly, and we can even see Khrushchev in a similar position as Nixon in one photograph. But truth is in the eye of the beholder, right?

This is why photography as a medium can never be 100% objective. Simply put, what is included and/or left out is chosen by the photographer. When I started studying photography and looked for the sources to learn from, I was often told to look at the pictures of great photography masters, because you will often learn far more than composition techniques.

If there is one thing we can take from this story, I think it would be that a simple twist to reality can change the narrative of a single photograph.

News and the media will push you to decide why a photo is the way it is. However, if you look at a photo both subjectively and objectively, you might discover its truth for yourself. In today’s digital age, I think this is a very important skill.

Ultimately, you are the beholder.

About the author: Martin Kaninsky is a photographer, reviewer, and YouTuber based in Prague, Czech Republic. The opinions expressed in this article are solely those of the author. Kaninsky runs the channel All About Street Photography. You can find more of his work on his website, Instagram, and YouTube channel.

A Beginner’s Guide to Mastering the Pen Tool in Photoshop

This Photographer Made a Working Camera Lens Out of LEGO

These Eerie Portraits Were All Shot ‘Inside’ Miniature...