How To Get Away With Murder is over: but how does it end for Annalise Keating and her crew, and what does that funeral really mean? 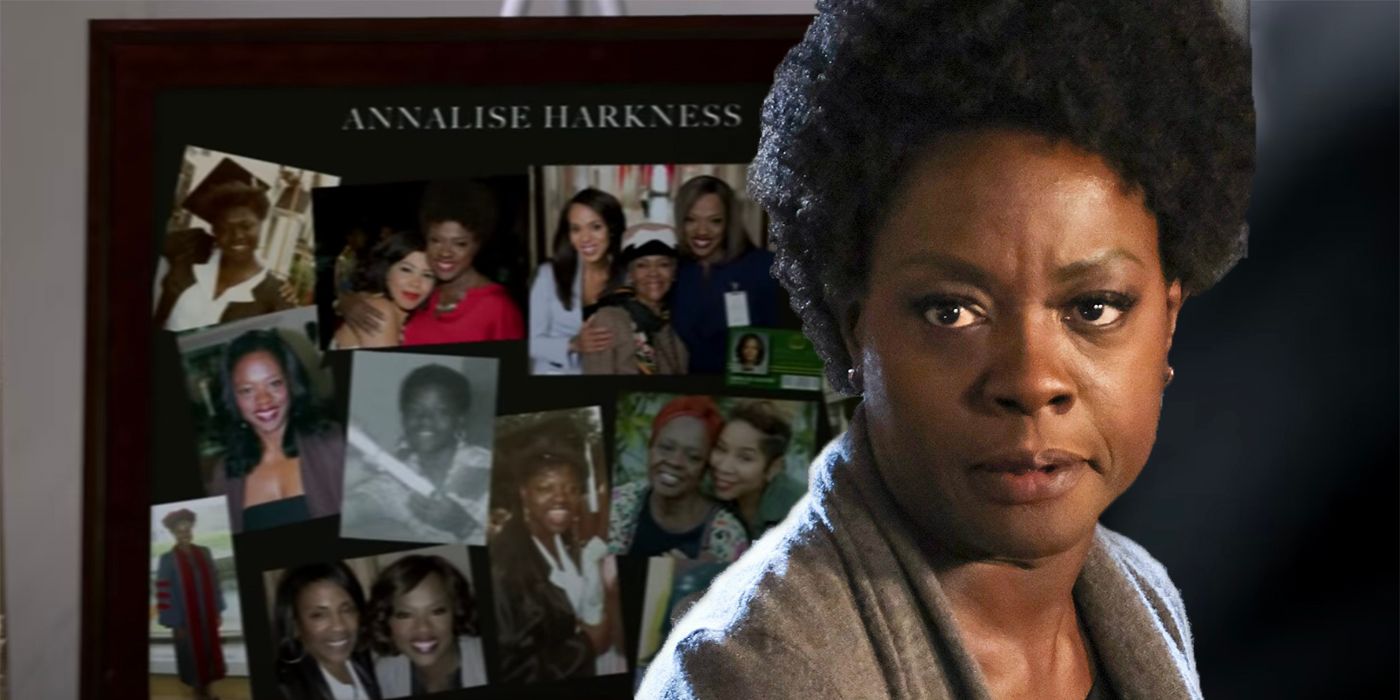 After six intense seasons, has wrapped up and brought with it a slew of last-minute deaths and revelations, but what happened in the finale, and what does it all mean? The series finale "Stay" begins with the final flash-forward death of the series as a mystery person is shot on the courthouse steps. Of course, this time there's only one episode to figure out who it is, rather than the usual season-long unspooling, but there are plenty of other surprises and deaths along the way.

Season 6 of How to Get Away with Murder is the last of the long-running legal drama that follows law professor Annalise Keating (Viola Davis) and five of her law students. Critically acclaimed for it complex plot and Davis' strong leading performance, How to Get Away with Murder's final episode answers some of the biggest questions in this series along with the sudden mystery gunshot victim that opens the episode - all agains the backdrop of Annalise's trial: will she be found guilty?

RELATED: How To Get Away With Murder: Why [SPOILER] Killed Asher

Fans are also eager to know if her students or anyone else in her orbit will all turn on her. Questions about that flash-forward funeral scene and the apparent reappearance of Wes (Alfred Enoch) are answered, but "Stay" does more than simply wrap up the obvious questions. As a finale, it offers closure on each of the main characters, while delivering a surprisingly moral message about telling the truth and moving past the things that each of the major players has done.

The central storyline is, of course, the trial itself. The finale throws a few twists and turns, although none as big as Laurel's (Karla Souza) surprise backing of Annalise in the previous episode. Jorge Castillo (Esai Morales) takes the stand and declares his innocence, along with Governor Birkhead (Laura Innes), and there's a brief "gotcha" moment when Annalise is able to provide a recording of Hannah (Marcia Gay Harden) talking to Xavier (Gerardo Celasco) about the conspiracy. Gabriel (Rome Flynn) is also persuaded (thanks to a suitcase of cash) not to take the stand, but all of these moments seem almost unimportant by the end of the trial.

These final twists add plausibility to Annalise's win, but the real gut-punch of her court case has nothing to do with Birkhead, Hannah, Gabriel, or even the surviving members of the Keating 5. Instead, it's all about Annalise's final speech. In a stunning scene, she breaks down the true focus of this whole convoluted conspiracy: that Annalise has committed the crime of being Black, ambitious, unlikable, bisexual, powerful, capable. From the scene of her removing her wig, to her dressing for court montage, to her decision to wear her natural hair, How To Get Away With Murder has been making an increasingly powerful statement about the place of Black women. The finale doubles down on that, refusing to shy away from her position, her growth, or her place in the world, and it's this that leaves fans cheering as she receives her "not guilty" verdicts.

Of course, the finale couldn't simply wrap up with a rousing speech, a victory, and a happy ending. Far too many characters are still standing, and there's that mystery shooting to resolve, which, coupled with the funeral flash-forwards, had many fans assuming the Annalise would end up with the ultimate narrative punishment of death for her outspokenness. However, Annalise does survive, all the way to the funeral that is finally revealed to be happening after she has lived a long life. Tegan (Amirah Vann) also survives the carnage, going on to be seen dancing with Annalise in the future. Laurel manages to get in the car with Baby Christopher and flee as soon as the gunshots go off, protecting her baby as always, and both Connor (Jack Falahee) and Oliver (Conrad Ricamora) make it through - although Connor is headed to prison, and Oliver is facing down divorce. Michaela (Aja Naomi King) also survives, out of jail, but friendless and alone.

RELATED: How To Get Away With Murder: What Happened Between Sam & Hannah:

The rest, though, are all dead. Wes and Asher (Matt McGorry) are long gone, along with Sam (Tom Verica) and Hannah. Governor Birkhead is the victim of the shooting at the courthouse, shot by Frank in a rage. Bonnie (Liza Weil) and Frank (Charlie Weber) also both die on the steps that day, Frank shot down by guards, Bonnie caught in the crossfire.

The series ends with the funeral shown at the start, which is Annalise's, just when she is an old woman. Connor and Oliver are there together, and Laurel is there with her adult son, who looks exactly like Wes. The  fascinating thing about how this wraps up, especially considering the funeral and final moments, is that it spends six seasons building up complex, sympathetic murderers and then ends with a surprisingly moralistic (yet realistic) conclusion, where everyone seems to get what they deserve based largely on how much lying and killing they did. Annalise, consummate liar, doesn't actually kill people, and she is vindicated, coming out strong, and then having a full, loved life before her eventual demise. Laurel, who told the whole truth at the end, redeemed herself to become a family friend of Annalise's. Connor and Oliver, who didn't kill, but lied and were complicit, were willing to accept their punishments (if not tell the truth) at the end, and this vindicated Connor, while Oliver had to face years alone and win back the trust of his husband for his willingness to betray Annalise for selfish reasons.

The worst liars and killers of the bunch are the ones who died: Asher, who killed and lied as a mole for the FBI; Wes, who killed Sam; Bonnie, who killed a helpless girl; Frank, who killed many people; and even Birkhead, who killed and conspired. However, with the exception of Birkhead, who refuses to be honest at the end, none of these deaths are meted out as pious judgment. Bonnie's death is the heartbreaking death of an innocent, and Frank's is the sorrowful death of a victim. manages to avoid sympathizing with the killers, but also show their fear and their motives and ensure that they aren't glorified or celebrated.

Michaela, in particular, is noteworthy as the only survivor not at Annalise's funeral; she gave up the "family" she found in the Keating 5 by betraying them, but she does so willingly and knowingly to keep herself safe. This is a reflection of the way that she has always stood slightly apart from them, from the first moment that she wanted to go to the police when others didn't. It's also noteworthy that her father isn't seen again, but in a flash-forward, she is seen being sworn in, which echoes Annalise's own story.

Related: Every TV Show Ending In 2020

If the final scene seems familiar, it's because it is almost a direct re-creation of the original opening scenes with Christopher stepping in for Annalise. The finale shows Christopher/Wes cycling through Middleton campus again, but this time it's Christopher headed to teach Annalise's old class, in exactly the same way. He even catches an imaginary glimpse of Annalise sitting in the class, smiling at him. After her powerful speech, and her series run of coming to fiercely embody exactly who she is, this is a vindication of the woman who didn't actually murder, but who tried to mother and to survive. The moment of coming full circle feels satisfying and provides the "happy ending" while still allowing for all these complicated people who did terrible things to be appropriately "punished" for them. It also feels like full closure, though, so it's not likely that another season or even a spin-off will be on the way despite a few questions that are left unanswered at the end.

It's still not clear quite how Annalise, Laurel, and Wes ended up in a family/mentor dynamic. Did Laurel reconnect with Annalise immediately after the death of her father in prison? And more importantly was she behind his death, finally finding her freedom from her family? Did Connor and Oliver reconcile immediately and wait through Connor's prison term, or did this take a whole lot longer? Did Tegan and Annalise get together, or were their dancing scenes simply friendship? And finally, of course, what waits for Christopher at Middleton as a professor? These may be the final secrets that How To Get Away With Murder keeps.

More: Will How to Get Away With Murder Season 7 Ever Happen?

The Big Bang Theory: How Raj Was Finally Able to Talk To Women