How to make Ghee and Clarified Butter (same thing!)

This is a recipe for how to make Ghee and Clarified Butter – they are almost the same thing (more on this later). Extremely easy, cheaper than buying, shelf-stable, and has a high smoke point which makes it excellent for pan frying or roasting things at high heat without burning like normal butter. It’s also... Get the Recipe The post How to make Ghee and Clarified Butter (same thing!) appeared first on RecipeTin Eats. 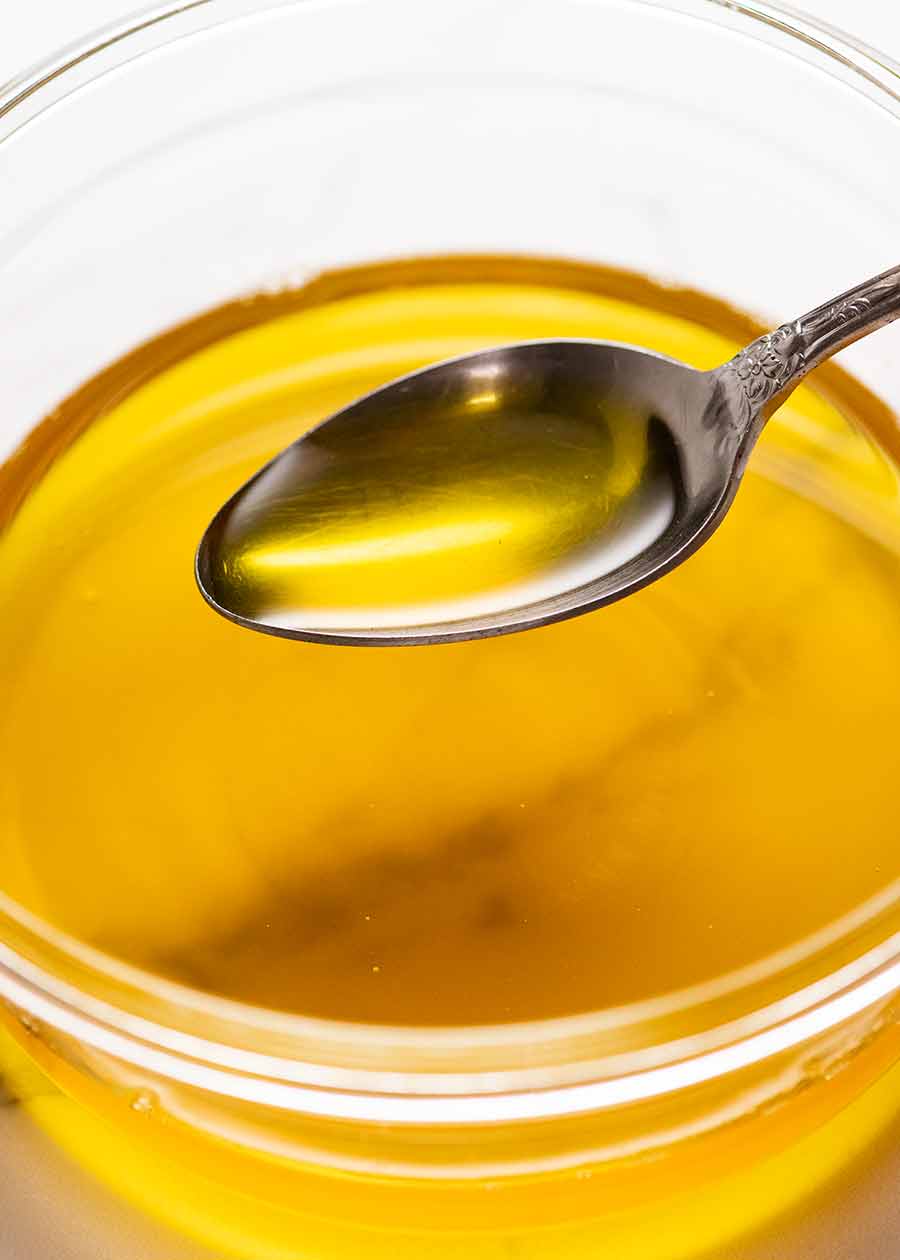 This is a recipe for how to make Ghee and Clarified Butter – they are almost the same thing (more on this later). Extremely easy, cheaper than buying, shelf-stable, and has a high smoke point which makes it excellent for pan frying or roasting things at high heat without burning like normal butter.

What is clarified butter and ghee?

And why do I love it so much? Here’s why!

I’ve used clarified butter and ghee in a handful of recipes and in each of those I keep repeating the same directions for how to make it at home if you can’t find it, plus it’s about half the price to make at home.

So I thought it was about time I put up a separate recipe for it – because it’s so easy!

If you can melt butter on the stove, you can make ghee! Essentially, you just leave butter on a medium low stove for 10 minutes until you see golden bits on the base of the pan which are the milk solids – and this means it’s done. The water has evaporated and the dairy has solidified which will be strained out.

Here’s how it changes during the simmering time: 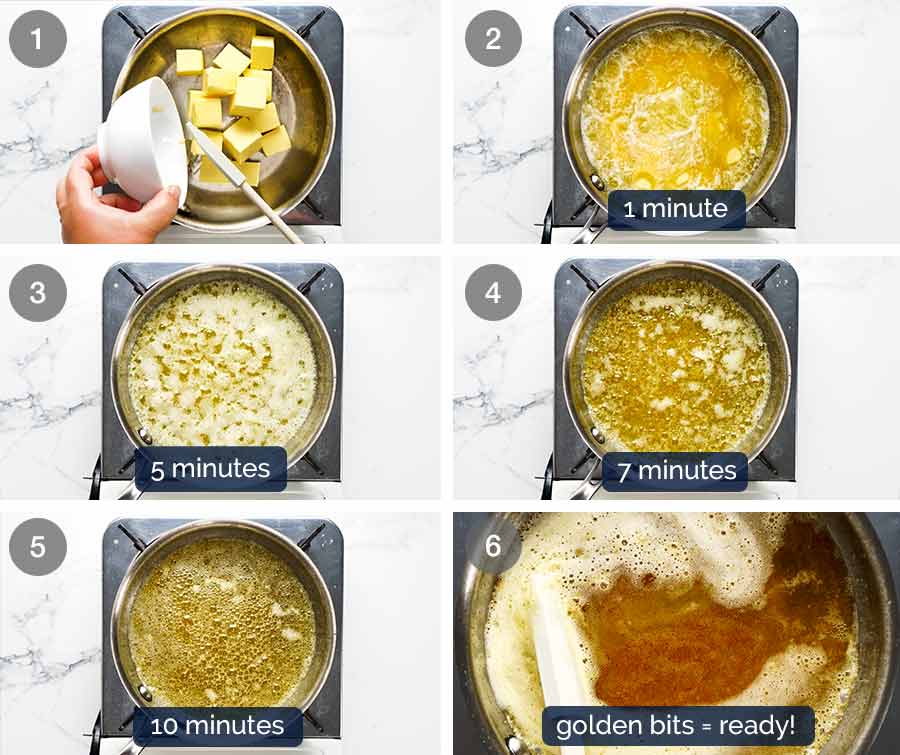 Then simply line a mesh colander with a paper towel and strain. Then marvel at the incredible liquid gold – and the smell! It’s insane – so buttery and nutty! 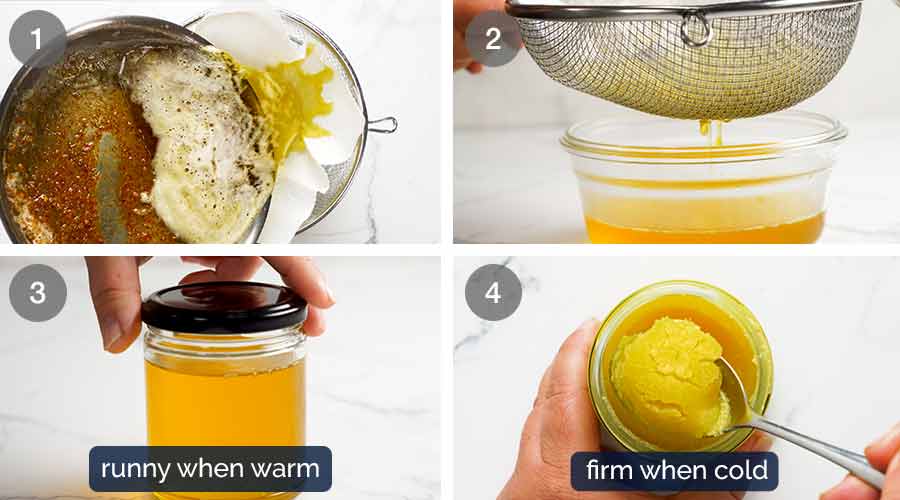 How to store ghee / clarified butter

Ghee and clarified butter can be kept in the pantry because the dairy has been removed and the butter is now 100% fat, so it won’t spoil. It will keep for 3 months in the pantry – or even a year in the fridge!

Important note: other basic methods of making clarified butter – such as just skimming the foam off – are not as thorough in removing all the dairy. So you should not store that in the pantry, it must be kept in the fridge. And I personally would not keep it any longer than the shelf life of the butter you used. 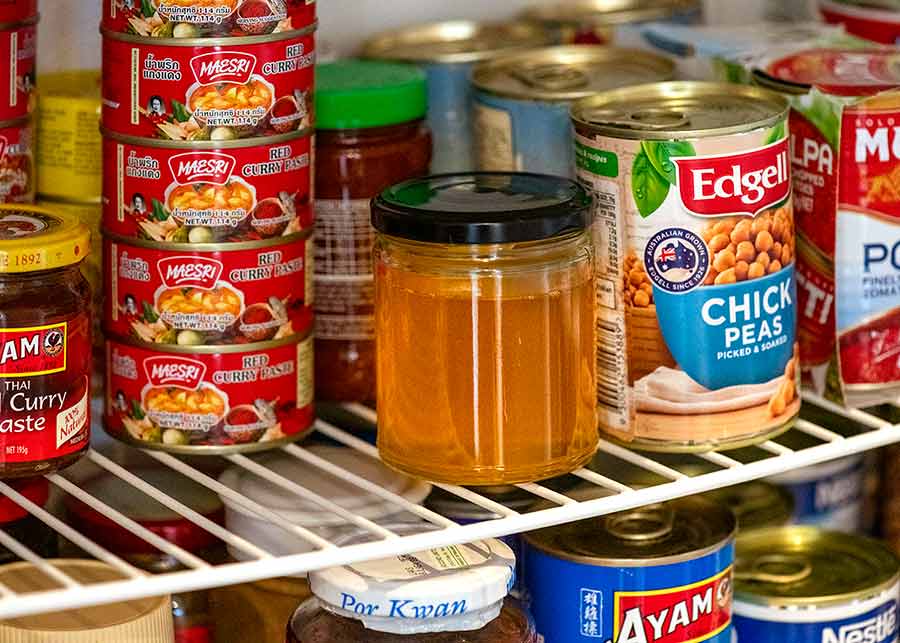 Ghee is liquid when it’s warm. In the pantry, it will firm up but still be quite soft – sort of like peanut butter consistency – as depicted below. If you refrigerate it, it becomes very firm, like butter, but it looks sort of grainy (melts completely smooth). 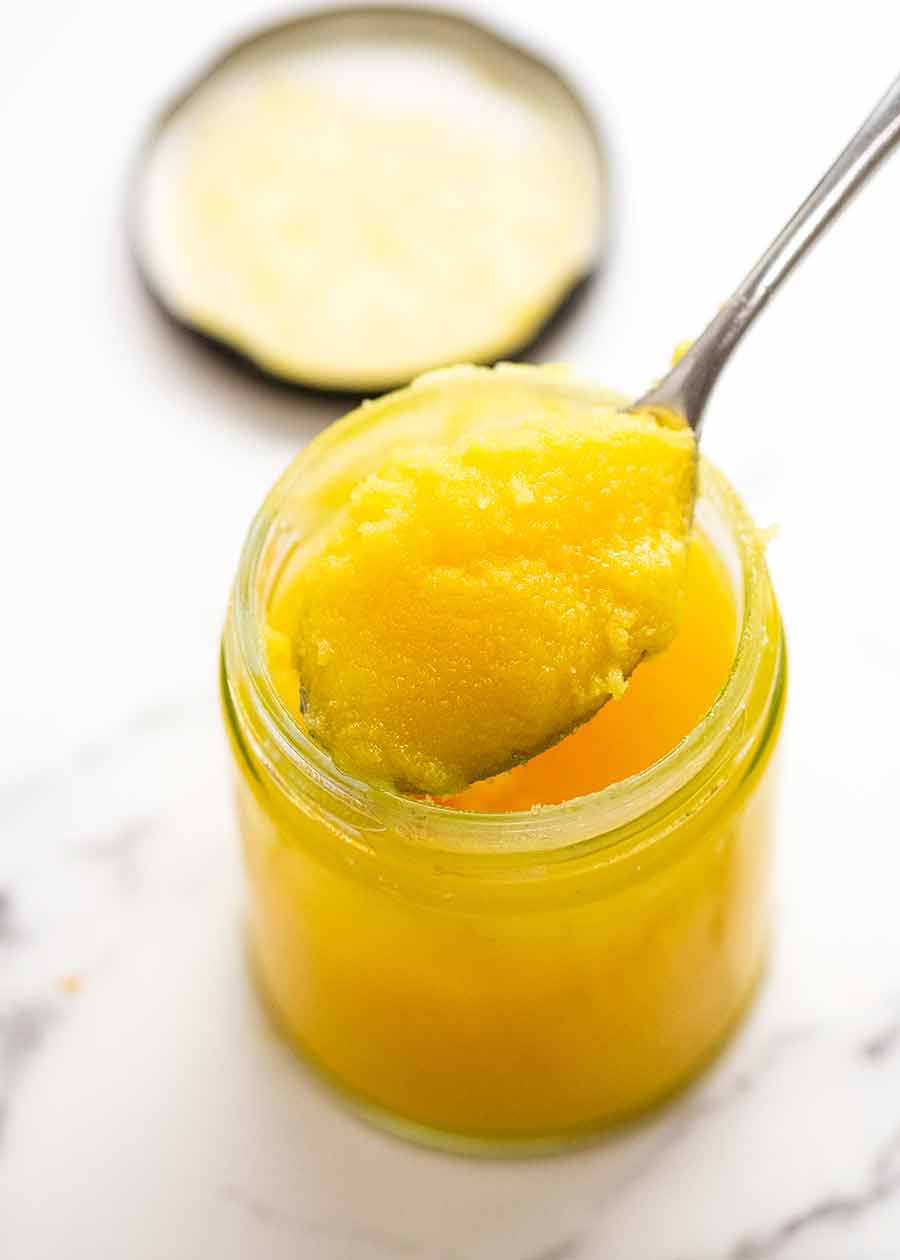 What butter to use

I use unsalted butter. Ghee and clarified butter purchased at the store is unsalted.

You can use salted if you prefer, but unsalted is handier because it’s the standard in recipes so you don’t have to worry about oversalting things because you have salted ghee. 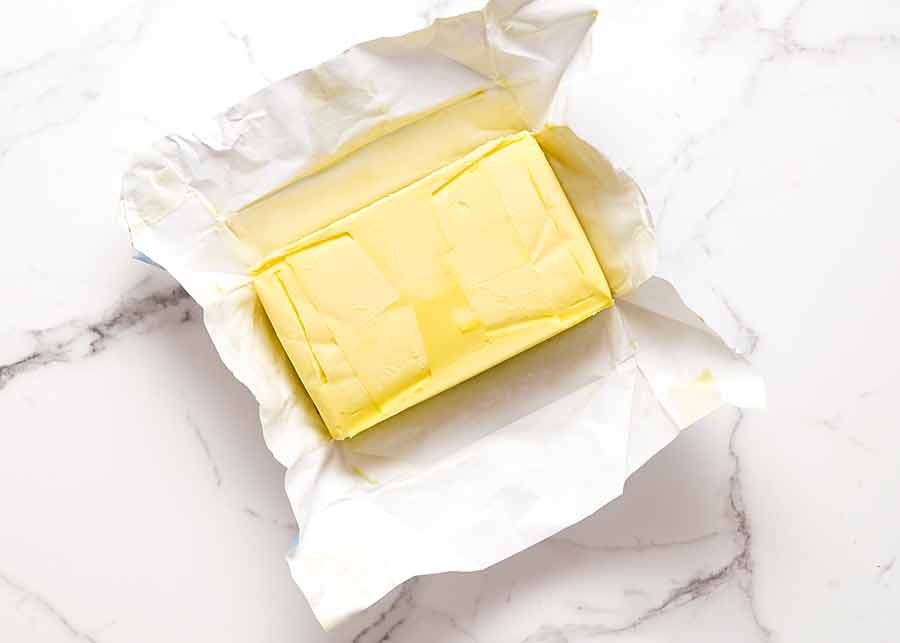 What is clarified butter? What is ghee? And what’s the difference?

Clarified butter and ghee are the almost same thing. Both are simply normal butter with the water and milk solids removed, leaving behind pure butter fat. Pure butter fat has a more intense butter flavour and a higher smoke point, meaning it is suitable for using just like regular cooking oil.

Put another way, butter is made up of about 82% fat, and the rest is dairy (milk solids) and water. The dairy is what leaves black spots on your food when you sear over high heat – because it burns. The water is what stops things going ultra crispy when you pan fry in butter, and it dilutes the butter flavour.

So with clarified butter, the water is removed and the dairy component is strained out, leaving you with pure butter fat.

The difference between ghee and clarified butter

Clarified butter is the general term for butter that has had water and milk solids removed, as explained above. However there are different methods for achieving this. One of the quickest and most common methods is to melt the butter, skim off the foam (which are the milk solids that initially float to the surface) and pour off the butter fat for use, leaving behind any remaining water.

Ghee however takes a specific approach to clarifying butter. Instead of skimming, you continue to heat the butter until all the water boils off, the milk solids go brown and sink to the bottom, and finally are strained out. As you can see this is the exact method I’ve provided above. So what you get with mine is true ghee! Think of it as a specific kind of clarified butter. I find it’s not only simpler, but has a superior flavour too AND you can be confident that every bit of dairy has been removed so it is safe to keep for months – years, if stored in the fridge!!!

What to do with ghee / clarified butter

Both ghee and clarified butter are used in cooking, as opposed to spread on toast or bread. You can use it in place of butter in recipes because it has a higher smoke point than oil – it will make things crisper and you won’t get those burnt black spots you get from pan frying in butter.

Here are a few examples:

Note: Use with caution in baking recipes (such as cakes and cookies). Baking is a science – so you don’t want to muck around with batters.

Lastly, it’s worth knowing that ghee is a secret ingredient used by Chefs in fine dining restaurants to add an extra touch of buttery flavour into dishes. Whether it’s brushing filo pastry for baklava or stirring through Creamy Mashed Potato or to make the most amazing Mashed Cauliflower of your life, it’s just one of the little tricks used by professionals to make food extra special. 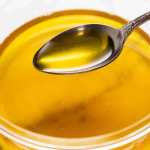 How to make Ghee and Clarified Butter (same thing - almost)

Recipe video above. Ghee is a form of clarified butter, where butter that is simmered until the water content is evaporated, then the milk solids are strained out to leave just pure gold butter fat with a nutty, intense butter flavour. It's shelf stable (3 months pantry, 1 year fridge), has a higher smoke point than butter so you can pan fry and roast on high heat without smoking out your house. It's a chef-secret ingredient, used in many recipes in place of ordinary butter for extra flavour, and the traditional fat used in Indian curries.
Course Basics, Sauces
Cuisine Western
Keyword clarified butter, ghee
Prep Time 3 minutes
Cook Time 10 minutes
Servings 220 ml / 7 oz
Author Nagi

Scaling recipe down - use a smaller saucepan otherwise the butter will spread too thinly and will be difficult to monitor.

Never far from the food station, whether cooking at home or out camping in the bush! 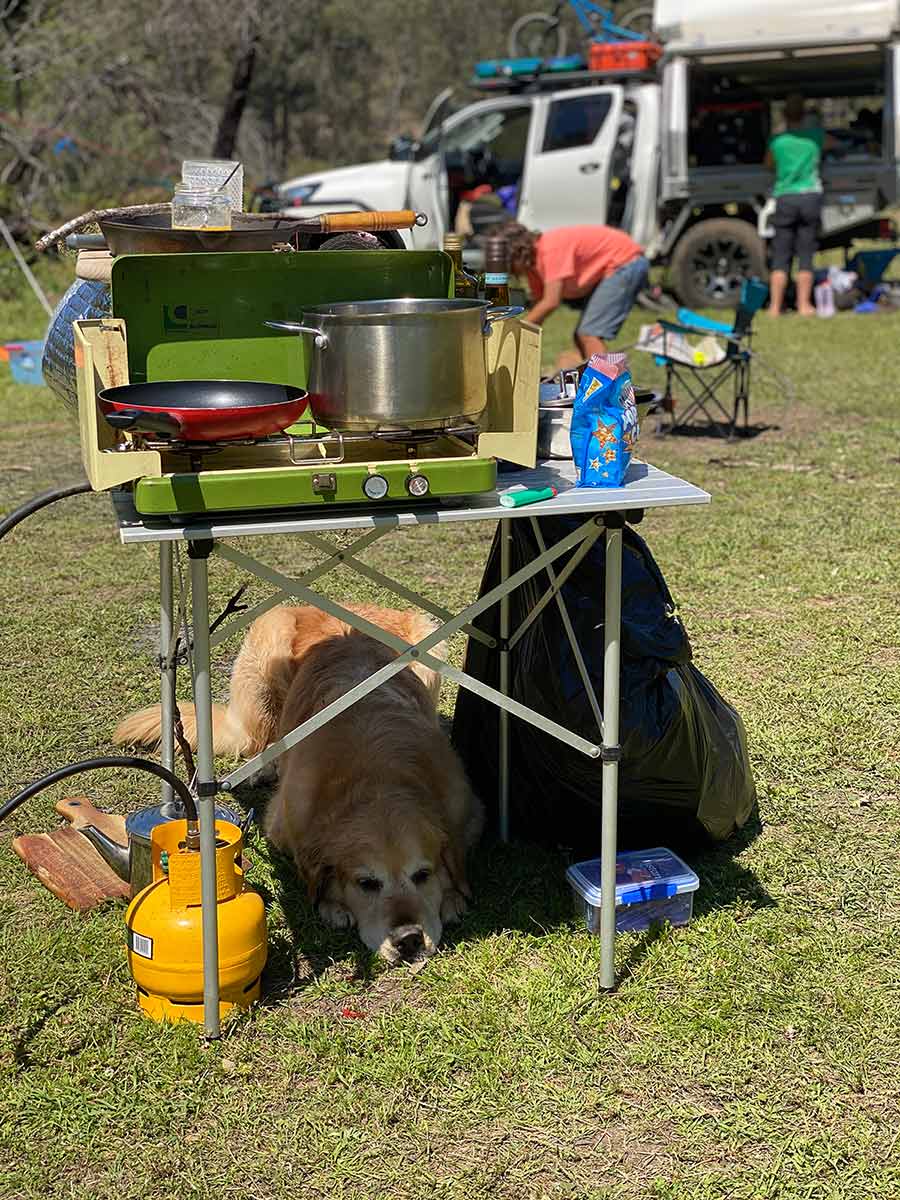 The post How to make Ghee and Clarified Butter (same thing!) appeared first on RecipeTin Eats.

How to Make Buttermilk