Hungary and Poland escalate budget fight over rule of law

Orbán and Morawiecki warn that tying cash to democratic standards risks the 'breakup' of the bloc. 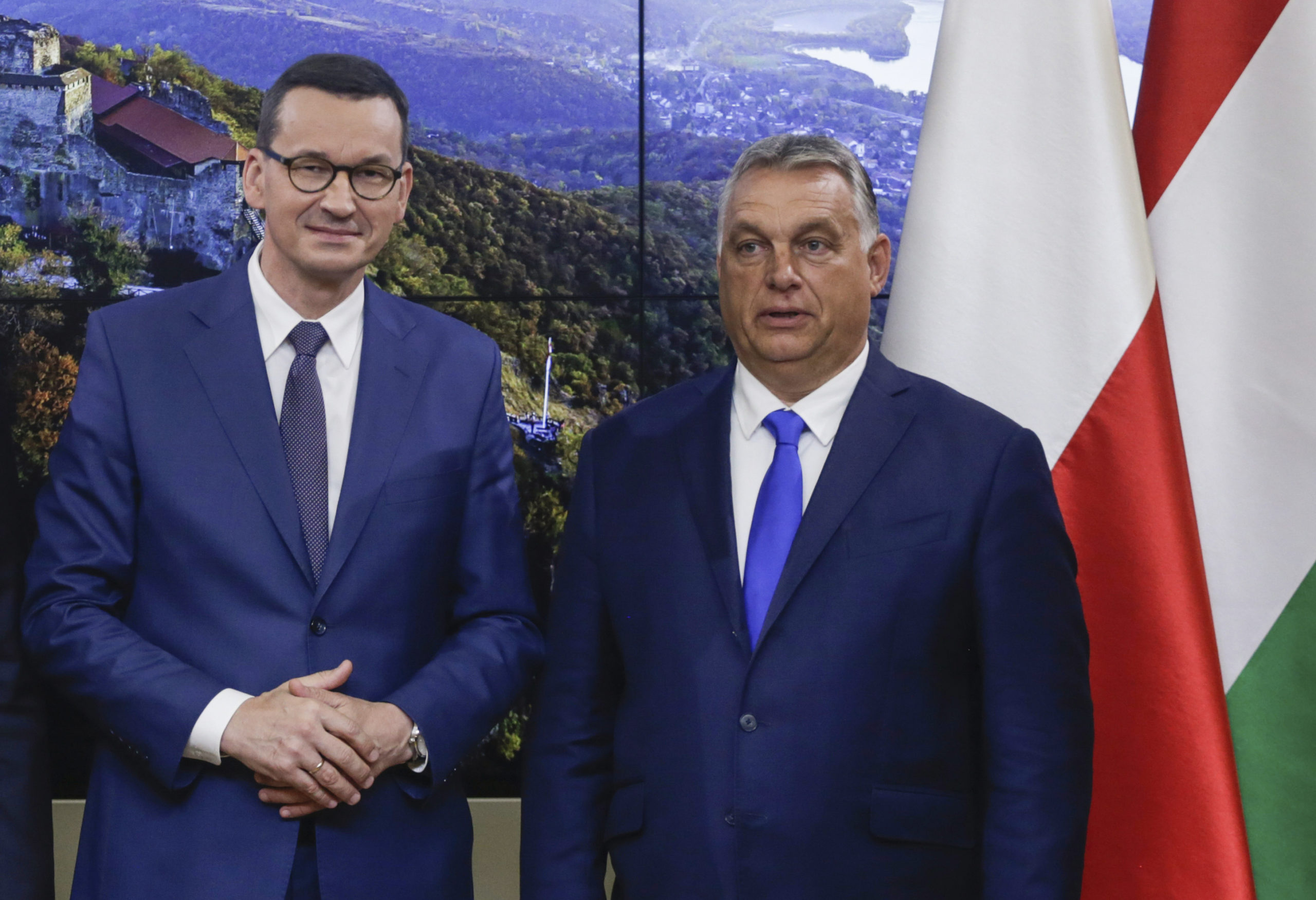 The leaders of Poland and Hungary doubled down on their threat to veto the EU’s €1.8 trillion budget and coronavirus recovery package on Thursday, rejecting efforts to tie the spending to the rule of law.

Following a meeting in Budapest, Polish Prime Minister Mateusz Morawiecki and his Hungarian counterpart Viktor Orbán released a joint declaration that committed them to continue the fight: “We have decided to align our positions on these issues. Neither Poland, nor Hungary will accept any proposal that is deemed unacceptable by the other.”

Both countries are under EU investigation for backsliding on democratic standards as their ruling parties tighten their grip on the judiciary, media and other institutions. They insist they’ll only give way on the budget if there is a “substantial modification” to a contested rule of law mechanism that would allow the EU to block funding if a country breaks the EU’s fundamental principles.

Morawiecki warned that tying cash to democratic standards is “extremely dangerous for European unity. This is a bad solution which creates the danger of the breakup of the union.”

The hardening of the Polish-Hungarian position — which comes despite intensive attempts by German Chancellor Angela Merkel to settle the dispute — means EU leaders are now heading for a major clash on rule of law at their upcoming European Council summit on December 10-11.

While Warsaw and Budapest are adamant that they won’t accept what they call “arbitrary” rule of law provisions, the rest of the bloc and the European Parliament insist they won’t give way on a principle they feel defines the EU’s fundamental values.

“It is clear that there is absolutely no support for reopening the conditionality mechanism in the European Parliament or in the Council,” said a senior EU diplomat. “With their statement, Poland and Hungary are moving deeper and deeper into isolation.”

The Hungarian-Polish declaration is a blow to Germany, which leads negotiation efforts as it holds the rotating Council of the EU presidency and has invested great political capital in the budget and recovery fund deal.

The Polish and Hungarian position is that the conditionality mechanism does an end-run around the EU treaties and “applies vague definitions and ambiguous terms without clear criteria on which sanctions can be based, and contains no meaningful procedural guarantees.”

Their statement also complains that the rule of law scheme allegedly goes beyond what EU leaders agreed in their budget deal in July. They insist that if the EU wants to make a link between rule of law and the budget it should be done by amending the bloc’s founding treaties — which effectively gives each member country a veto.

Speaking at a joint press conference following the meeting, Orbán said he was unconcerned about the prospect of a halt in EU funding. The two countries are among the largest recipients of EU cash, which is crucial to their economies. If the veto threat isn’t lifted soon, the EU will have no budget as of next year and would have to rely on emergency mechanisms.

“Hungary faces no financial loss if the European crisis management budget does not come together,” Orbán said.

Both leaders also insisted they were within their rights to wield the veto threat.

“I see that the larger member states and the media would like to apply pressure saying that the Hungarian veto was somehow inappropriate,” Orbán said, adding: “I would like to emphasize that the veto is a legal tool.”

Morawiecki said Warsaw “won’t hesitate to use a veto for the good of the whole EU,” adding that the rule of law conditionality was a tool to attack certain countries.

Merkel’s Germany will outlast her

Boris Johnson: ‘We cannot edit our past’