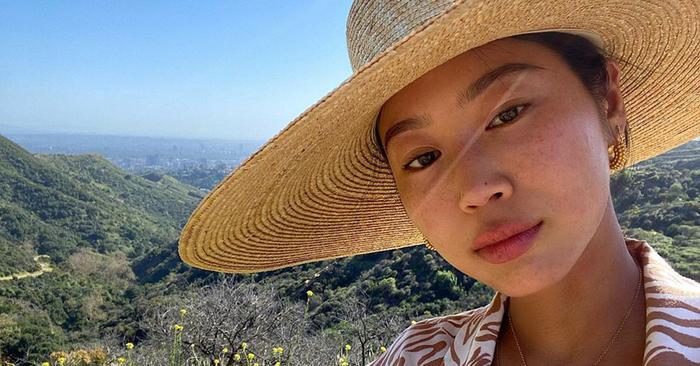 A trip down the sunscreen aisle at the store can get pretty overwhelming at times. The terms seem endless: SPFs, mineral, organic, UVA, UVB, reef-safe, etc. Up until recently, I would just grab the sunscreen I had been using for years and go, not really looking into the ingredients or terms.

But just like you might read the labels on the food you eat, it's important to take a look at the labels on the products you're putting on your body. It's helpful to do some research to know that what you're applying to your body isn't harming you or making your skin freak out.

We've covered chemical versus mineral and SPF in another story, so now we're going to focus on the term "organic" and what it actually means when it comes to sunscreen.

We have an idea of what "organic" means when it comes to food, but when the term is used to describe a sunscreen, it becomes a little bit foggier. "This is a tricky question to answer since organic has so many meanings," says Heather D. Rogers, MD, founder and CEO of Doctor Rogers Restore and co-founder of Modern Dermatology in Seattle. "Probably the most commonly held definition involves the use of food of animal or plant origin produced without chemically formulated fertilizers, growth stimulants, antibiotics, or pesticides."

Rogers explains that the interpretation has evolved from just describing food to describing products and their ingredients. In this case, organic is a regulated labeling term that means the ingredients were produced through approved methods and verified by a USDA-accredited certifying agent. Both entire products or individual ingredients in a product can be labeled as organic.

"Another definition of organic is 'of relation to carbon compounds,' which, when applied to sunscreen, means carbon-based chemicals are used to protect the skin from UV radiation," Rogers adds. "Here, the chemical sunscreen ingredients are technically considered organic, as in 'organic chemistry,' and are a chemical with a carbon backbone (oxybenzone, avobenzone, and octinoxate) instead of mineral or physical or inorganic sunscreens made from zinc and titanium, which do not contain carbon."

If you're still confused, that's okay. It's a lot to take in, especially when you don't have a medical degree. Instead, Rogers says to look closely at the labels instead of just blindly stocking up on sunscreens that have an organic sticker.

"Since organic terminology is extremely confusing, particularly when it is applied to sunscreen, it is not a label I would focus on," she recommends. "Instead, look for sunscreens with fewer ingredients that are described as 'mineral,' 'physical,' and 'hypoallergenic.' Make sure your sunscreen contains at least 10% zinc oxide in order to provide protection against both UVB rays that cause burns and UVA rays that are longer, come through windows, and cause brown spots and wrinkles. Increasingly, I tell my patients to look for sunscreens labeled as 'reef-safe,' which means the ingredients aren't toxic to coral reefs and other marine life."

With that in mind, we rounded up the sunscreens that fit the bill—and yes, a lot of them are labeled as organic. Take a look below:

A Man’s Guide to Investing in His 30’s

5 Cute Matching Outfits To Wear With Your Son

The Lesser-Known Benefits Of Choosing Sewing As A Hobby

Non-Scary Bikinis Exist, and I Found Them