If bacteria stick together, they can survive for years in space

Tiny clumps of bacteria can survive at least three years in outer space. This raises the prospect of interplanetary travel by microbial life. 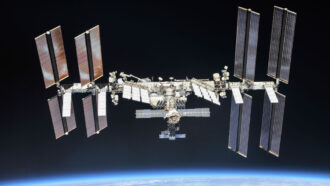 Outer space is not friendly to life. Extreme temperatures, low pressure and radiation can quickly degrade cell membranes and destroy DNA. Any life-forms that somehow find themselves in the void soon die. Unless they band together. As small communities, new research shows, some bacteria can withstand that harsh environment.

Balls of Deinococcus bacteria as thin as five sheets of paper were placed on the outside of the International Space Station. They stayed there for three years. Microbes in the heart of those balls survived. The group’s outer layers had shielded them from the extremes of space.

Researchers described their finding August 26 in Frontiers in Microbiology.

Keeping space missions from infecting Earth and other worlds

Such microbial groups might be able to drift among planets. This could spread life through the universe. This is a concept known as panspermia.

It was known that microbes could survive inside artificial meteorites. But this is the first evidence microbes can survive this long unprotected, says Margaret Cramm. “It suggests life can survive on its own in space as a group,” she says. Cramm is a microbiologist at the University of Calgary in Canada who did not take part in the study. She says the new finding adds weight to the worry that human space travel could accidentally introduce life to other planets.

Akihiko Yamagishi is an astrobiologist. He works at the Institute of Space and Astronautical Science in Tokyo, Japan. He was part of a team that sent dried pellets of Deinococcus bacteriato space in 2015. These radiation-resistant microbes thrive in extreme places, such as Earth’s stratosphere.

The bacteria were stuffed into small wells in metal plates. NASA astronaut Scott Kelly affixed those plates to the exterior of the space station. Samples were then sent back to Earth each year.

Back home, researchers moistened the pellets. They also fed the bacteria food. Then they waited. After three years in space, bacteria in 100-micrometer-thick pellets didn’t make it. DNA studies suggested that radiation had fried their genetic material. The outer layers of pellets that were 500- to 1,000-micrometers (0.02 to 0.04 inch) thick also were dead. They were discolored by ultraviolet radiation and desiccation. But those dead cells shielded inner microbes from the hazards of space. About four in every 100 of the microbes in those larger pellets survived, Yamagishi says.

He estimates that 1,000-micrometer pellets could survive eight years floating through space. “That’s enough time to potentially get to Mars,” he says. Rare meteors might even be able to travel between Mars and Earth in a few months or years.

How exactly clumps of microbes might get expelled into space is not clear. But such a trip could happen, he says. The microbes might get kicked up by small meteorites. Or they might be thrown from Earth into space by thunderstorm-induced perturbations to Earth’s magnetic field, Yamagishi says.

Someday, if microbial life is ever discovered on Mars, he hopes to look for evidence of such a journey. “That’s my ultimate dream.”

Evictions ban will end on Sunday, says Master of the Rolls

Flying snakes wriggle their way through the air

NASA Rover Captures What A Solar Eclipse Looks Like On...

Beyond The Black Hole: Event Horizon Telescope Solves A...