Immigrant advocates to Biden: Be better than Obama

'Hell yeah, I’m optimistic. But … I know how this works. Nothing is going to be enough.' 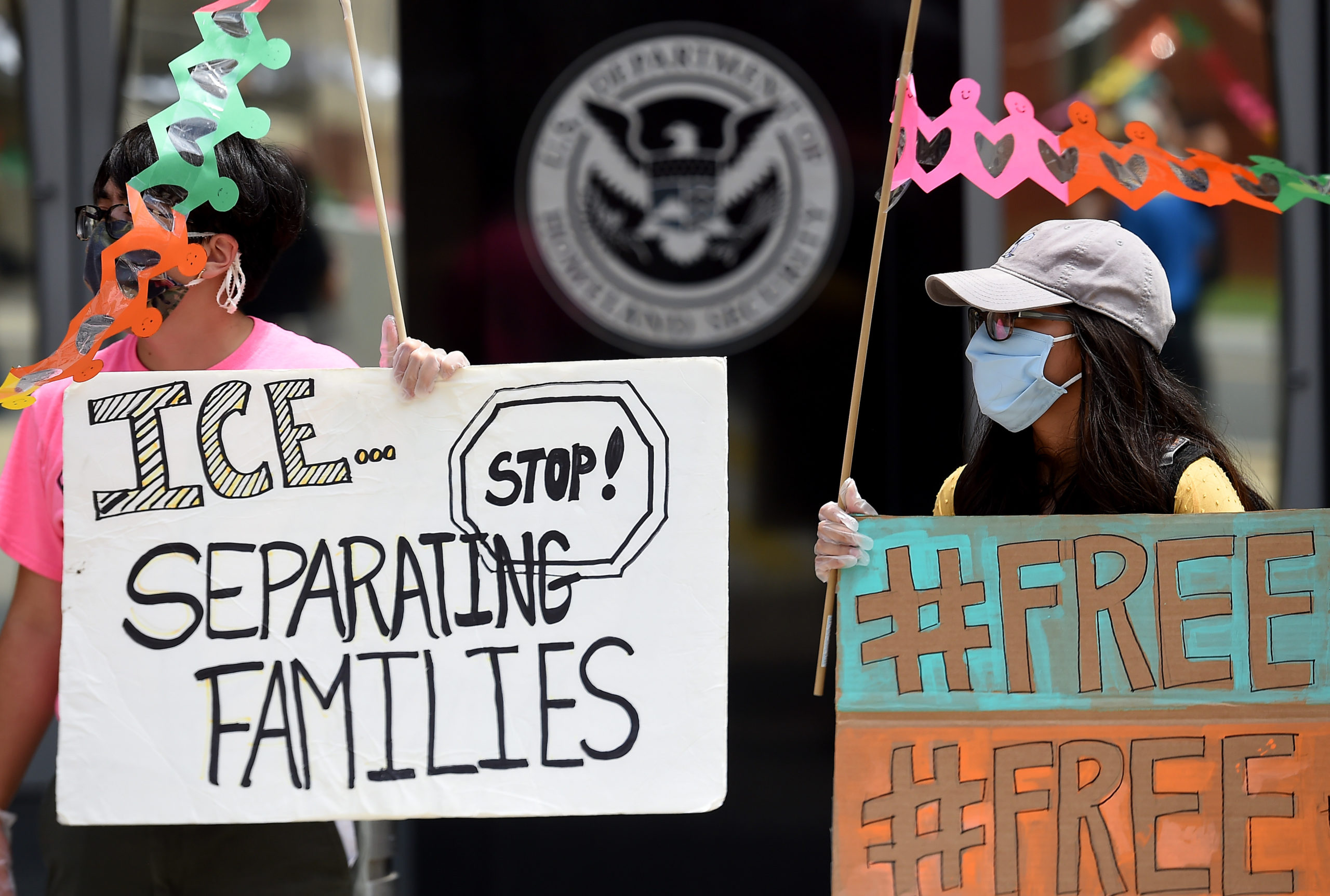 President-elect Joe Biden will begin his administration with one quality that’s automatically a positive for immigrant advocates: He’s not President Donald Trump.

But immigrant advocacy groups aren’t planning to hold back on their demands. They expect Biden to follow through on his promise to quickly undo Trump’s immigration policies— and while he’s at it, atone for the mistakes of the Obama administration.

So far, advocates are encouraged by Biden’s pick to lead the Department of Homeland Security: Alejandro Mayorkas, a Cuban-born lawyer and one of the architects of the Deferred Action for Childhood Arrivals program. Still, they’re gearing up to ensure Biden keeps immigration a top focus amid a , from coronavirus response to climate change to racial equity.

Biden already has a long to-do list to rebuild the U.S. immigration system. But he could be hamstrung by a divided Congress that’s never managed to pass comprehensive immigration reform.

“Hell yeah, I’m optimistic. I don’t know what the hell we were going to do if Trump won again,” said Marisa Franco, executive director of Mijente, a grassroots Latinx advocacy group. “But then the other side of me is like, ‘I know how this works.’”

“Nothing is going to be enough that [Biden] does and that’s the same issue that folks in the crime-and-justice movement have and folks in policing [reform] have. I think it’s very possible for things to get lost and that’s what our job is: To make sure it doesn’t,” Franco added.

Biden must move quickly to prove he has learned from President Barack Obama’s mistakes on immigration. Obama — despite creating DACA — was dubbed “deporter in chief” and is known for expanding the detention of immigrant families and dragging his feet on major immigration legislation.

Tapping Mayorkas, former deputy secretary of the Department of Homeland Security under Obama, is a “conversation starter,” Franco said. But she and other immigrant advocates say staffing is just one piece of it. They want the former vice president to impose a 100-day moratorium on deportations, rescind many of Trump’s more than 400 executive orders on immigration (like the so-called Muslim ban) and lay the groundwork for tougher goals like a pathway to citizenship for undocumented immigrants — all promises he made on the campaign trail.

Privately, multiple Hispanic Caucus members said a large number of Democrats would be “severely disappointed” if Biden didn’t push immigration reform early. “That’s not going to sit well with a lot of folks,” said one lawmaker in the caucus.

Biden on Tuesday acknowledged that some of his priorities for the first 100 days could be impacted by “the kind of cooperation I can or cannot get from the United States Congress.” But he vowed to take quick action on immigration.

“In the first 100 days, I will send a immigration bill to the United States Senate with a pathway to citizenship for over 11 million undocumented people in America,” Biden said in an interview with NBC News’ Lester Holt.

Biden and his transition team know the president-elect will have to rebuild trust with immigrant communities and do more than just end the harm caused by the Trump administration, one person close to the transition said.

Among Biden’s list of immigration promises, he plans to reinstate DACA, created under Obama to shield undocumented immigrants who came to the U.S. as children from deportation. The Trump administration has repeatedly sought to dismantle DACA — but has been blocked by courts on several occasions.

Biden also vowed to protect Temporary Protected Status, which protects immigrants from countries devastated by natural disasters or armed conflict. In 2018, the Trump administration began phasing out the program for more than 300,000 immigrants from El Salvador, Nicaragua, Haiti, Honduras, Sudan and Nepal. Biden plans to  to Venezuelan exiles.

The president-elect also pledged to reunite more than 500 children detained at the border with their families. And he plans to expand the annual global refugee admissions cap from Trump’s fiscal 2021 limit of 15,000 to 125,000 — a goal that advocates say will take time, but sets a positive tone.

Talbot predicts immigration will remain a big focus of a Biden administration. For starters, he’ll have to undo a lot of what Trump did. And lessons from the Obama era will position Biden to pursue “more humane and smarter priorities.”

“There’s also going to be court cases and litigation bubbling to the top, so it won’t be possible to ignore immigration,” Talbot said.

Talbot and other advocates argue pro-immigrant policy isn’t just federal immigration policy. Biden is expected to push for a pandemic relief package that explicitly factors in immigrant communities — similar to the Heroes Act that House Democrats passed earlier this year. That bill would allow immigrant and mixed-status families to receive direct relief payments and ensure access to COVID-19 testing and treatment for all regardless of immigration status.

Much of Biden’s immigration agenda won’t happen overnight — regardless of whether he personally prioritizes it or not. Executive orders won’t override all of Trump’s actions and the process for implementing new regulations requires multiple bureaucratic hurdles.

One challenge will be building a better asylum system, particularly at the U.S.-Mexico border. And that could be even more complicated if migration to the border surges early next year. And the recent hurricanes in Central America, the economic downturn and Trump’s departure makes a surge a distinct possibility.

“Long term, they can change policies, but it will take time to do it,”said Andrew Selee, president of the Migration Policy Institute. “And I don’t think they’re going to have any new tools in the tool kit on Day One to handle that.”

That means the Biden administration will be forced to keep a lot of Trump measures at the border, while they try to build a better system, Selee said.

What’s more, it’s not likely comprehensive immigration reform will get much traction on Capitol Hill if Republicans hold on to their majority in the Senate. And advocates and former DHS officials anticipate the Trump administration — led by Stephen Miller, the chief architect of Trump’s immigration policy— will further constrictimmigration before Biden takes office.

Still, Democrats say they’re determined to put forth a comprehensive immigration reform bill that Biden can sign off on. Rep. Linda Sanchez (D-Calif.) is drafting a bill that Democrats hope to drop right as Biden enters the White House.

If Democrats don’t pass immigration reform or a pathway to citizenship at the very least, Democrats will “be in a world of hurt” next election cycle, said Chuck Rocha, former senior adviser to Sen. Bernie Sanders’ presidential campaign.

“It hurts us in the next election if we can’t take something back to the community that we’re doing for them,” Rocha said.

However, some advocates and lawmakers insist Democrats “shouldn’t put all their eggs in a basket” and should be ready to pursue a piecemeal approach. They’re also watching whether the Biden administration will follow recommendations drafted this summer to unite the moderate and progressive wings of the Democratic Party.

The  were crafted by allies of both Biden and Sanders. And they includea big victory for Sanders supporters: reversing the use of Section 287 under the Immigration and Nationality Act, which allows DHS to enter agreements with local police to act as immigration agents. They also advocate closing private detention centers and ending the “public charge rule” that allowed officials to deny green cards to immigrants who used — or are considered likely to use — public assistance.

“I’m watching for how much of that document will be tried to be swept under the rug,” said Franco, of the Latinx advocacy group Mijente, who helped craft the recommendations. “It’s going to say a lot about where the Biden administration is planning to go.”

Mayorkas, if confirmed, will represent a major shift in tone and direction for DHS, which was created after the Sept. 11, 2001, terrorist attacks. Under Biden, the agency is expected to also put more focus on cybersecurity and emergency response.

Mayorkas, who served as DHS’ deputy secretary under Jeh Johnson, would be the first immigrant and Latino to lead the department. He has been confirmed by the Senate three times already: for deputy secretary at DHS, director of the U.S. Citizenship and Immigration Services and as U.S. Attorney for the Central District of California.

“He brings to the job all the right attributes in my judgment. He understands the complexity of the immigration issue and I’m sure he will bring to that mission compassion and sensitivity,” Johnson said.

Janet Murguia, president of UnidosUS and a former adviser to President Bill Clinton, lobbied for Mayorkas. His extensive experience means he’ll be ready to get to work on Day One, she said.

“He brings strong support not just from the immigrant community, but from the law enforcement community,” Murguia said. “He seems to be the right person at the right time.”

Still, Democrats acknowledge Mayorkas and Biden — whether they like it or not — will be faced with a balancing act on immigration.

“It’s going to be tricky,” said Rep. Lucille Roybal-Allard (D-Calif.), chair of the House Appropriations subcommittee on homeland security. “It’s always tricky to find that balance between protecting our borders, while at the same time making sure we don’t violate our American values.”