Inside the 'most bizarre press conference of the year'

This wasn't your average media conference - and that's putting it mildly. 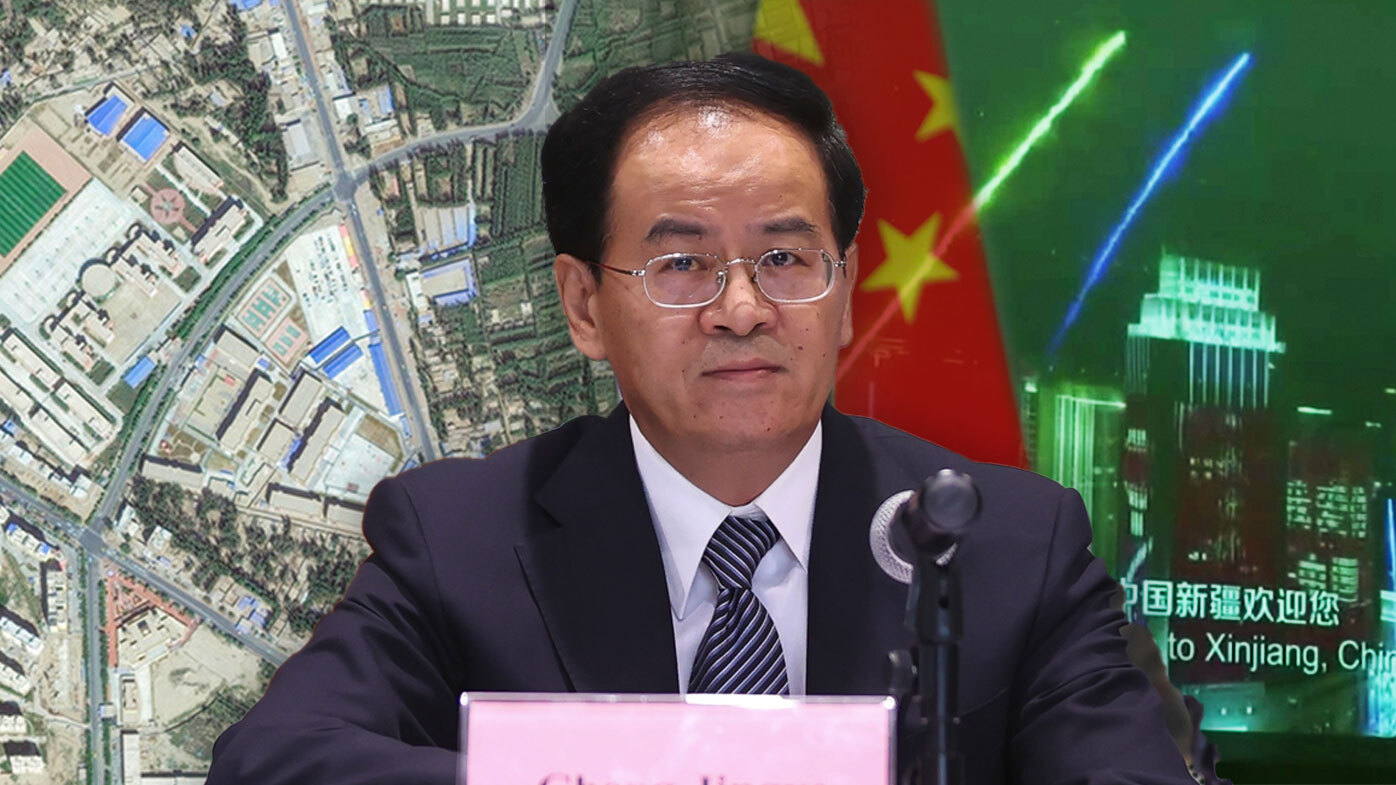 This wasn't your average media conference - and that's putting it mildly.

This was a performance on a grand scale, inside a palatial ballroom.

High-backed red chairs spaced apart in front of a giant screen, nearby the Australian and Chinese flags were side-by-side. 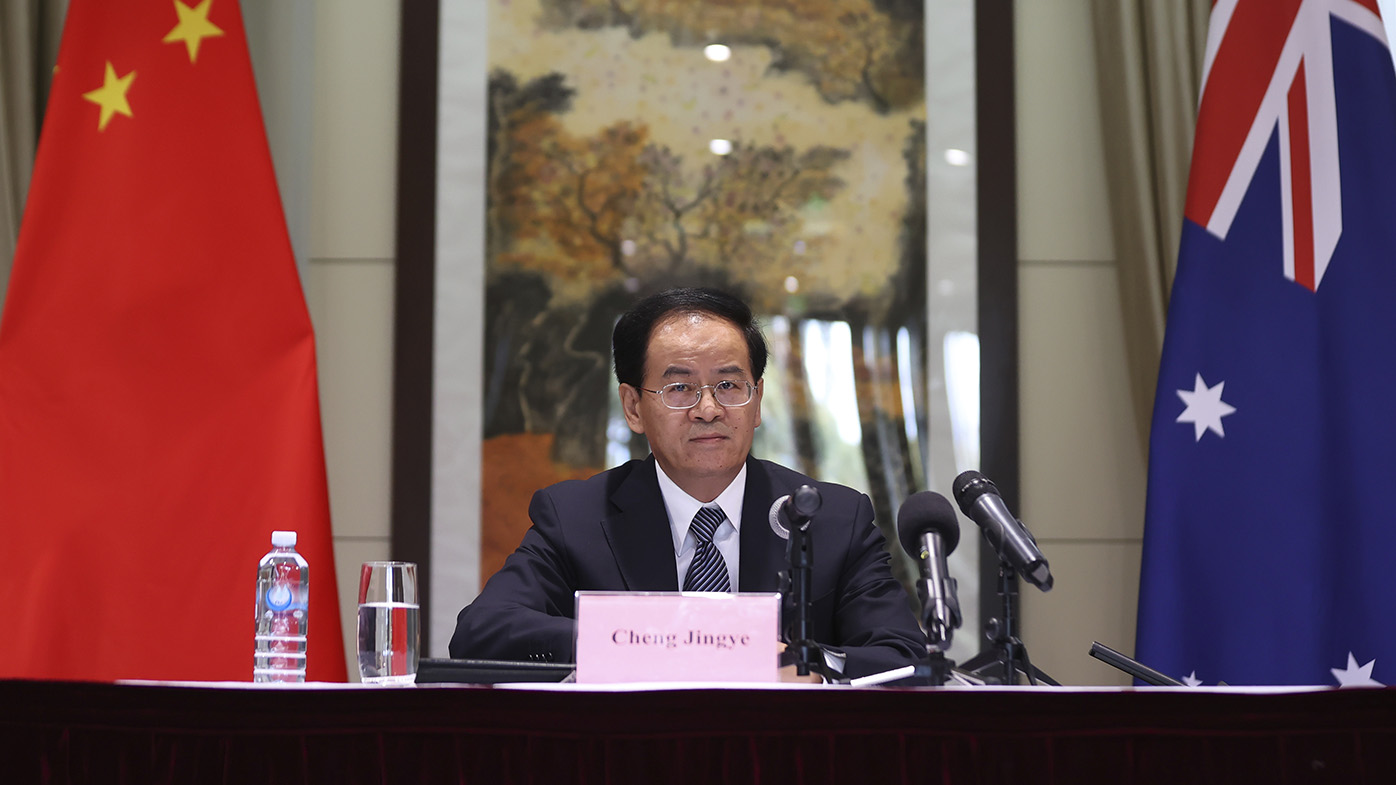 The cast featured an ambassador in a suit, joined on Zoom by a table full of men in suits, and somewhere else, a group of people claimed to be parents, workers and an imam in the north-western Chinese province of Xinjiang.

Accompanying them in this real-life political drama were highly-produced videos spruiking life in the province.

It was propaganda, delivered direct from Beijing, for "a wonderful land".

"A land of prosperity and progress."

"A land of harmony and stability."

A land where it's claimed 1 million ethnic minority Muslim Uyghurs are held in camps.

A land the Australian and New Zealand governments claim there is enough evidence of "severe human rights abuses that include restrictions on freedom of religion, mass surveillance, large-scale extra-judicial detentions, as well as forced labour and forced birth control, including sterilisation".

That's a far cry from wonderful.

But the Chinese Government has long disputed all these claims and inside the Chinese Ambassador's Residence, the defence was put on show. 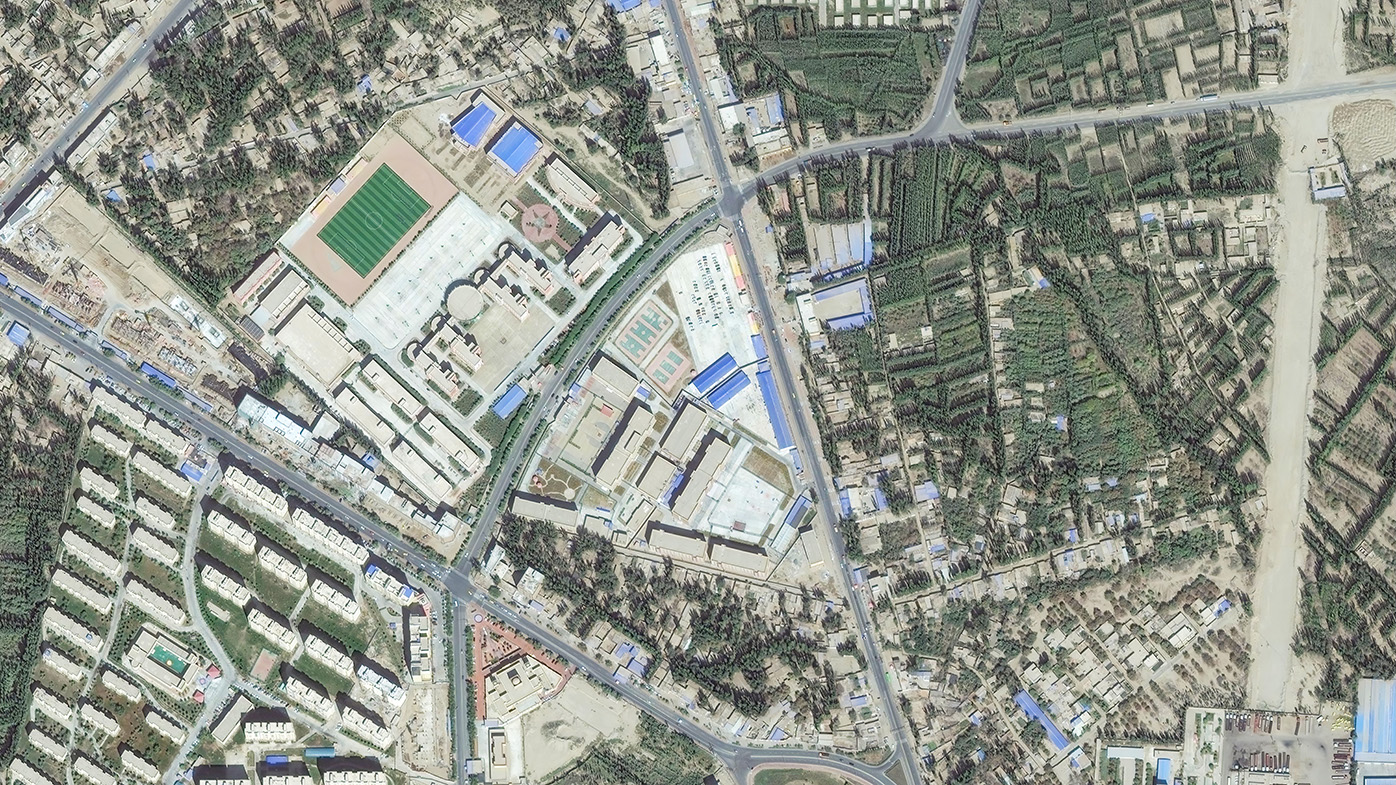 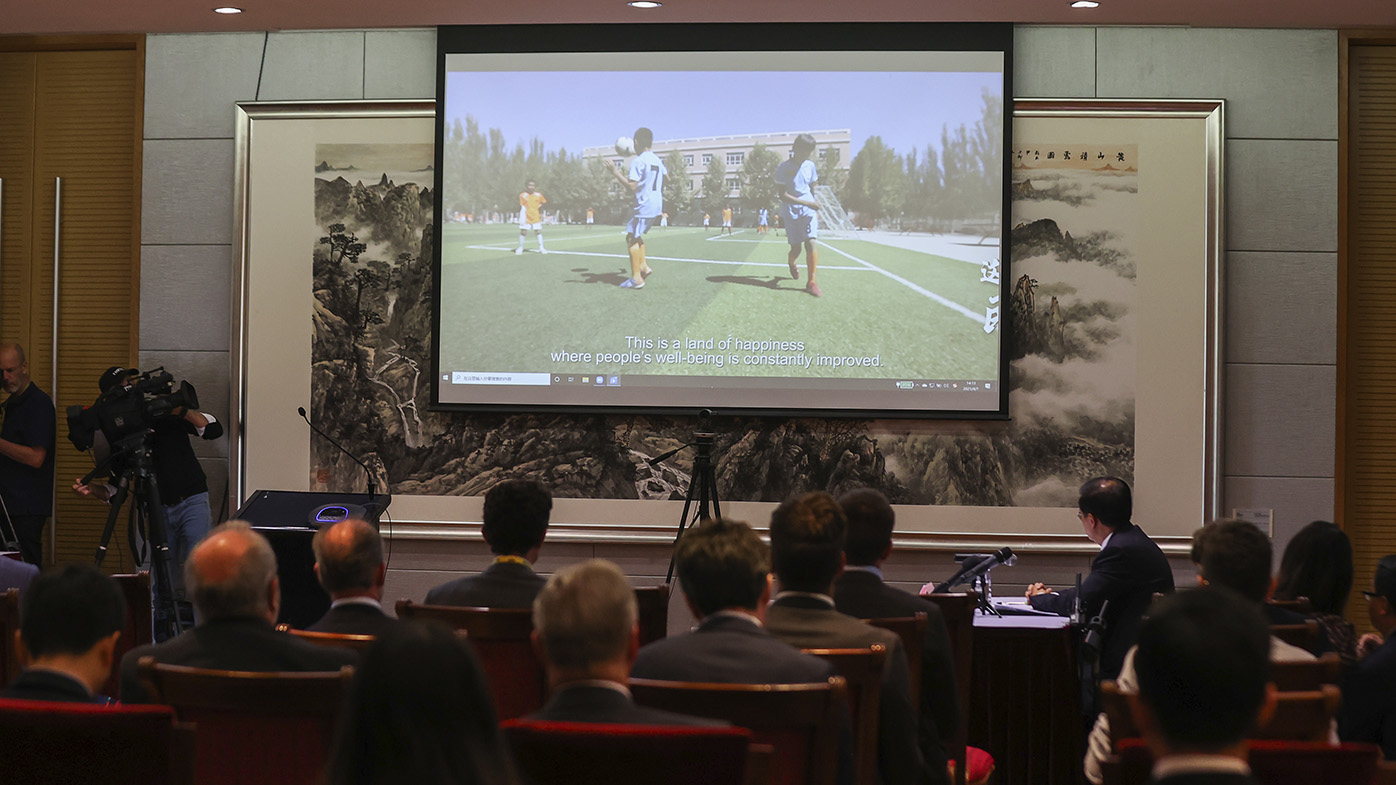 The performance got off to a bumpy start, as technical issues meant a video selling life in the "wonderful land" did not play, then had no sound, then was restarted for the full production.

Journalists gathered in the room were treated not to one production, but multiple on different issues.

On work, school life, the economy, birth control, and claims the Chinese Government had been countering a surge in terrorism in Xinjiang.

A surge it claims to have effectively wiped out.

But it's a surge Uyghurs in Australia say never existed.

A video is broadcast.

Over a picture of a lake at sunset, and families smiling posing for pictures, the narrator spouts: "The tendency of frequent terrorist activities has been effectively curbed."

Each of these videos was separated in the production by a different guest speaker, with a similar narrative: life in Xinjiang is wonderful.

The Vice-Governor of Xinjiang reeled off an array of numbers that would impress any statistician as he talked about lifting people out of poverty. 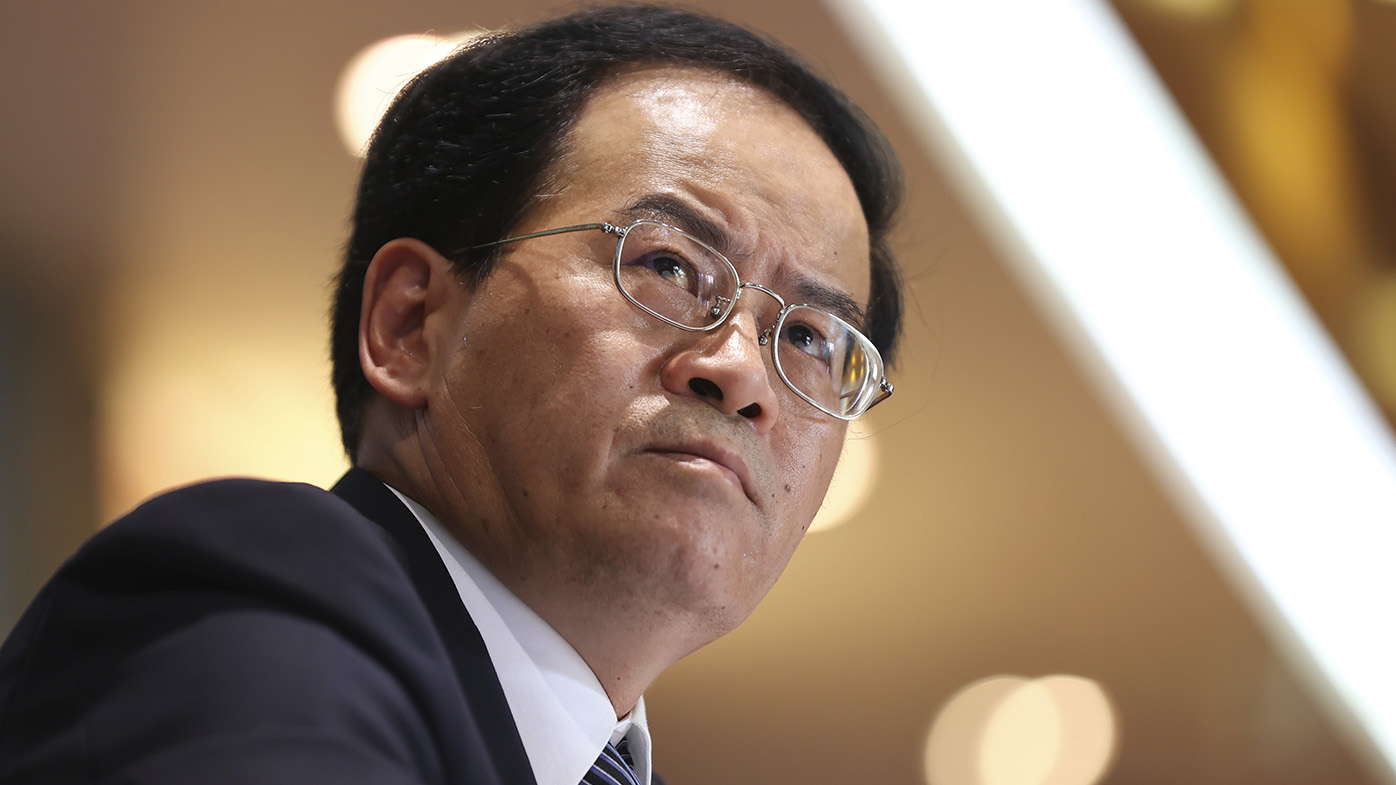 The public-relations exercise was in overdrive.

The Xinjiang panel was chaired by Xu Guixiang, a deputy director of the publicity department for the Chinese Communist Party in the Xinjiang Uyghur Autonomous Region.

He had the lead role in attacking Western democracies and disputing what he described as "lies" about re-education camps.

Then came a series of supporting roles.

We were told these were six experts in Xinjiang who would tell us all about life in the "wonderful land".

All but one was a woman and mentioned they had children and how many they had.

They talked of returning to work after realising their husbands "were the only breadwinners".

It was a line seemingly repeated.

"These are related to the topics for today's event," Xu Guixiang declared.

"As we understand it many Western media are concerned about family planning policies and related issues in Xinjiang so we think it is more appropriate to have women representatives answering the questions."

But it was, at times, almost as if each were reading from a prepared script.

Eyes moved right to left across the screen like there was an autocue, normally used by television newsreaders or essentially anyone who doesn't want to get what they're about to say on camera wrong.

The only man to speak was an imam, who opened the door with an invitation to a province usually closed to those outside of China.

Again his eyes were fixed on the camera.

To them life was ideal, and the promotional videos sold a life that was designed to look that way.

Designed to make you ponder whether this place really could be what it was claimed to be.

How could somewhere as beautiful as this have 1 million people from an ethnic minority held in detention?

They all look so happy…

There's videos of people washing a family car, walking to school, landscapes not dissimilar to a tourism video.

It's like, "Xinjiang, where the bloody hell are you?" 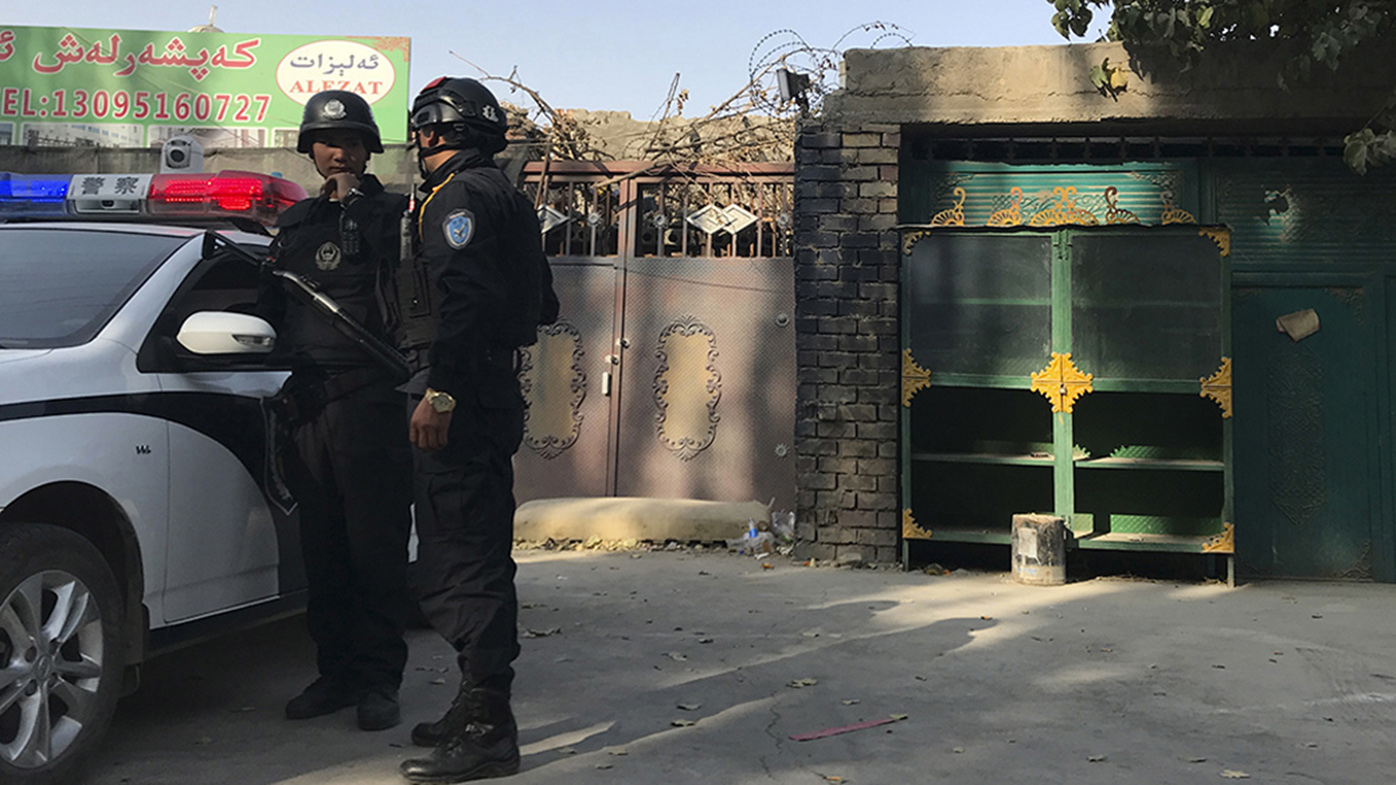 The first hour ticked by, the first act ended.

A second was in store.

It was time for questions.

But the experts had vanished.

There were to be no questions to them, only the Chinese government and Xinjiang officials, and the ambassador.

He was asked twice a provide a number on how many were being held.

We were told how people could graduate from these camps and move on, while others who did not graduate would spend more time there.

The ambassador said allegations of genocide or human rights abuses in Xinjiang were "fake news".

He warned if Australia was to follow other international allies by placing sanctions on China then the communist government would "respond in kind".

The Chinese ambassador said he had wanted all questions to be centred on life in Xinjiang, but after more than a year where the relationship between Beijing and Canberra has been colder and more bitter than a long, frosty winter, His Excellency would have known questions would circle back to the bilateral relations.

"We hope the Australian side will look at the situation in Xinjiang (in an) objective and rational way," Mr Cheng said.

"We hope that the Australian side will go together with us in the same direction so that this important relationship could be put back on track."

It sounded almost as wonderful as the propaganda videos made life in Xinjiang look.

But the answers were laden with language, some nuance but little in substance.

This was a show of defence and an opportunity for the Chinese government to claim it was being trying to be transparent.

The show was to come to an end, but not without a final say from the show's headline act.

"Today's presentation from a different angle, different people, these presentations as I see it has given is a true picture of Xinjiang.

"Think those who spread those rumours against China against Xinjiang are futile.

"Nobody can stop or can change the course of progress for a better future of the place". 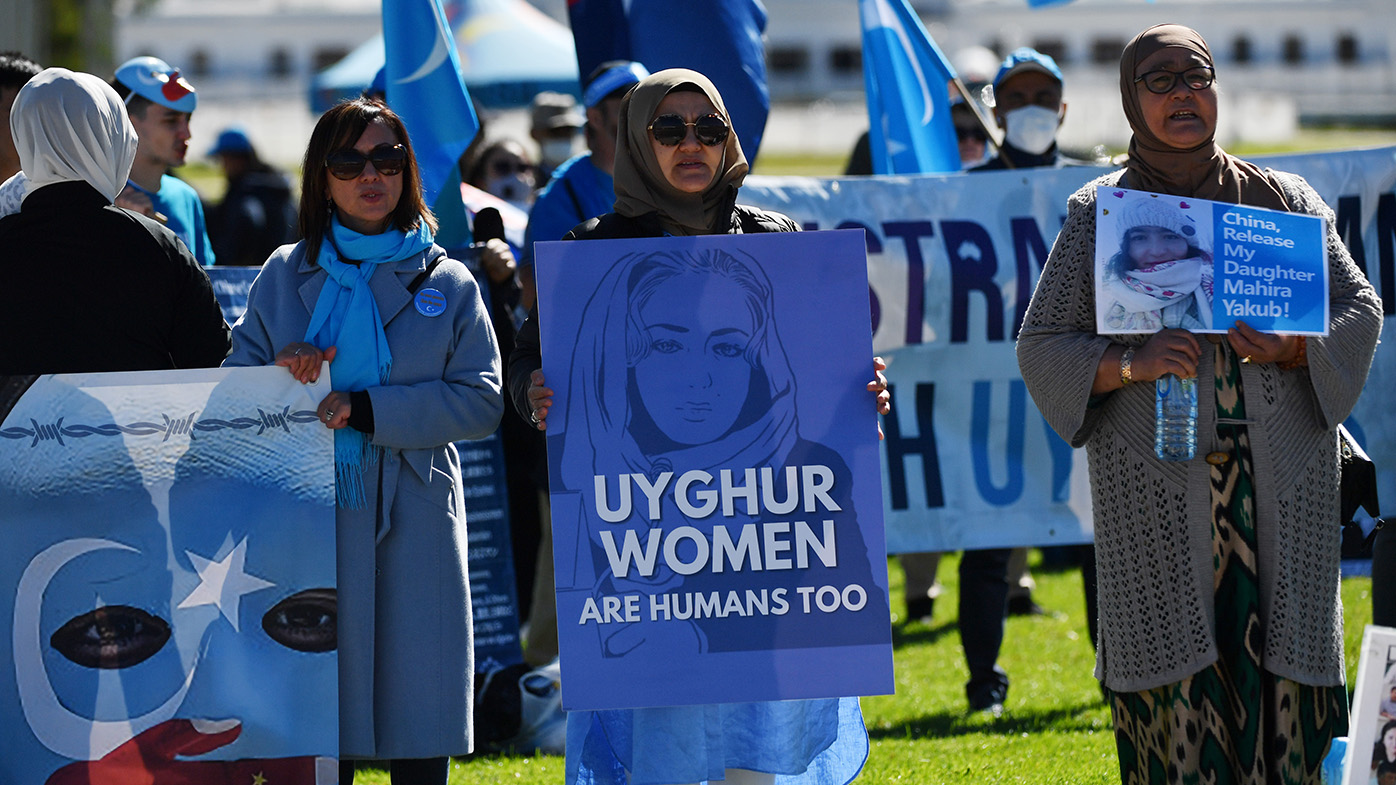 The ambassador finished, a panel of government officials waved from Xinjiang, ending perhaps the most bizarre media conference this year.

Bizarre if not for the fact that there are Uyghurs here in Australia and around the world who fear for the safety of their loved ones.

They fear what is becoming of them.

They say they cannot talk to them, hear them, or know they are okay.

In some instances, they haven't spoken in years.

One woman who sent money to her parents eight years ago for them to buy a house is now reportedly being held on charges of "giving material support to terrorist activity".

That is what the Australian government is concerned about.

The show at ambassador's residence is over for now, but there could be many more sequels in this story yet.