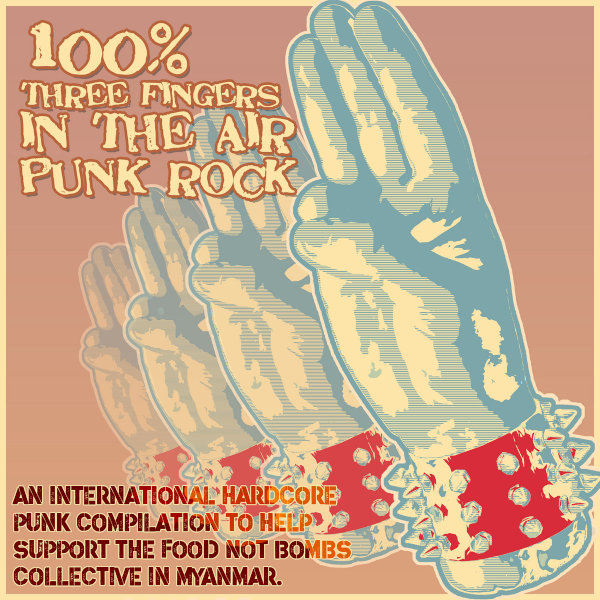 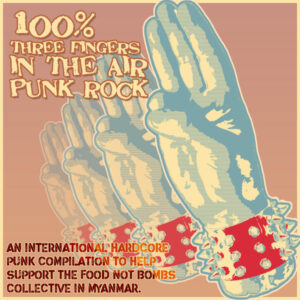 An international compilation of hardcore punk bands has topped the bandcamp punk downloads and sent much needed cash to activists facing down fascism in Myanmar.  Nathan Brown bought it and says you should too.

Chaos, who sang on the aforementioned album, is one of the brains behind this release. It’s a project from new band Fear Of The Known (F.O.T.K), an international long distance band featuring Chaos, Steve from Disorder, Andy Lefton from War//Plague, Tom Radio of Seattle band Frustration and Yuji Kawaguchi of Japanese punk legends Rose Rose.

The download only release is an international hardcore punk compilation to support the Food Not Bombs collective in Myanmar, a place which has seen no end of turmoil. As the release page states: “In Myanmar the military have taken over the country. It has arrested the democratically elected leader and imprisoned, tortured and killed all those that oppose it. Collectively, we may be able to assist, by helping to pay for food, clothing, medical aid, and by supporting those who have stepped up to face down the fascist junta”

Kicking off with The Rebel Riot, from Myanmar, and the appropriate song Demonstration there are unreleased tracks from Japanese thrashers Deathside, Seattle’s Nightfeeder and F.O.T.K.

Listen to Demonstration by The Rebel Riot.

Occupying the number 1 spot for punk releases on bandcamp on it’s release, in a few days they had made enough to send over their first payment of $2,200 to the Food Not Bombs Myanmar group. That figure is rising and more will follow. Especially if you buy it.

Words by Nathan Brown. Check out his Louder Than War Author Archive.

Tirzah's 'Send Me' Is An Addictive Return

It's Eminem. It's Kid Cudi. It's A Brand New Single.

The Chicks Return With First Album In 14 Years ‘Gaslighter’:...