Daniel Vettori, former Royal Challengers Bangalore (RCB) captain believes AB de Villiers should be batting higher up the order for the franchise. Daniel Vettori played for RCB in 2011-2012. Coming in to bat at No.5 against Mumbai Indians (MI) on Friday, AB de Villiers scored a magnificent 48 off 27 balls to help RCB win the IPL 2021 opener. Daniel Vettori: It Was AB De Villiers Again Who Showed His Class But No. 5 Is Pretty Low For A Player Of His Quality While Washington Sundar opened with skipper Virat Kohli, Rajat Patidar was sent in at No.3, pushing AB De Villiers 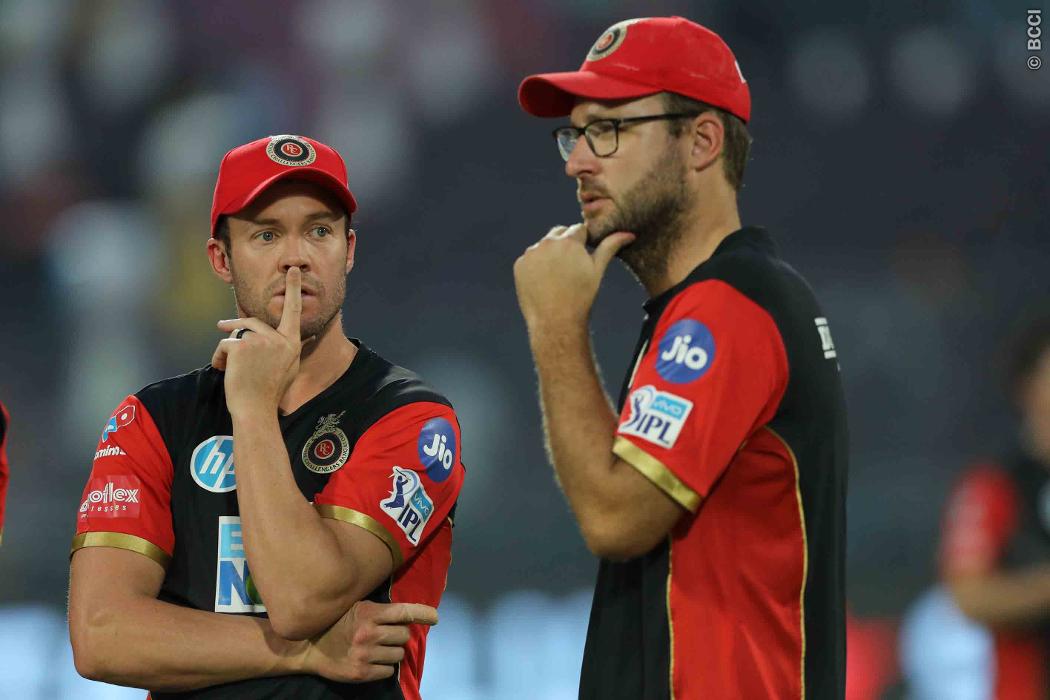 Coming in to bat at No.5 against Mumbai Indians (MI) on Friday, AB de Villiers scored a magnificent 48 off 27 balls to help RCB win the IPL 2021 opener.

Daniel Vettori: It Was AB De Villiers Again Who Showed His Class But No. 5 Is Pretty Low For A Player Of His Quality

While Washington Sundar opened with skipper Virat Kohli, Rajat Patidar was sent in at No.3, pushing AB De Villiers down the order. Daniel Vettori feels demoting AB de Villiers wasn’t the right move as he is too good a player to be batting at the No.5 position.

Daniel Vettori told ESPN Cricinfo: “We have talked so many times about how RCB relies on either AB de Villiers or Virat Kohli. They got a little cameo from (Glenn) Maxwell as well. But in the end, it was De Villiers again who showed his class.

“They put him down to No. 5, which is pretty low for a player of his quality. But they got the result they wanted because of his ability and his maturity to get them through. It was a wonderful innings. Apart from him and Maxwell, no one really looked fluent at all for RCB throughout the innings.”

Chasing 160 for victory, RCB was once placed at 122 for 6. However, AB De Villiers came up with the goods to help his side win the thrilling contest. Although the South African legend was run out in the last over, RCB sneaked home by two wickets.

With Washington Sundar opening the innings alongside Virat Kohli, Rajat Patidar and Glenn Maxwell were sent in ahead of AB de Villiers. AB de Villiers came up with another of his exhilarating knocks, hitting 48 from just 27 balls to help RCB get past the finish line and win a season opener for the first time in the history of the IPL.

AB De Villiers: It Was An Incredible Cricket On Display And RCB Was Under Pressure To Negotiate MI Bowling Lineup

“It was an incredible game of cricket, always seems to be against Mumbai. We obviously came in knowing it wasn’t going to be easy. I knew halfway it was going to get tough. It’s one of those pitches that gets harder as the game goes on. They have a wonderful bowling line up that put us under pressure,” AB de Villiers said.

Although AB de Villiers is a brilliant runner between the wickets, he was run out against MI.

Reflecting on his dismissal, he added: “There was an easy two in my opinion, but as I started it felt like I was running backwards. Krunal got it spot on with the throw.”

Apart from AB de Villiers’ brilliance with the bat, Harshal Patel claimed five wickets to restrict the to just 159 runs. Harshal Patel was named Man of the Match for his efforts.

Jimmy Neesham Names His Second-Favourite Side For IPL Title...