Virender Sehwag, former Indian dashing opener lavished praise on Mumbai Indians fast bowler Jasprit Bumrah, calling him the franchise’s “Brahmastra” following their impressive win against Sunrisers Hyderabad (SRH) in their Indian Premier League 2021 (IPL 2021) encounter at the MA Chidambaram Stadium in Chennai on Saturday. Speedster Jasprit Bumrah returned with figures of 1/14 in his four overs and bowled an excellent 17th over in which he only conceded three runs. Virender Sehwag Is Mumbai Indians’ Brahmastra Speaking to Cricbuzz after the match, Virender Sehwag remarked that as long as MI has this weapon, they are “unbeatable”. Jasprit Bumrah’s economy 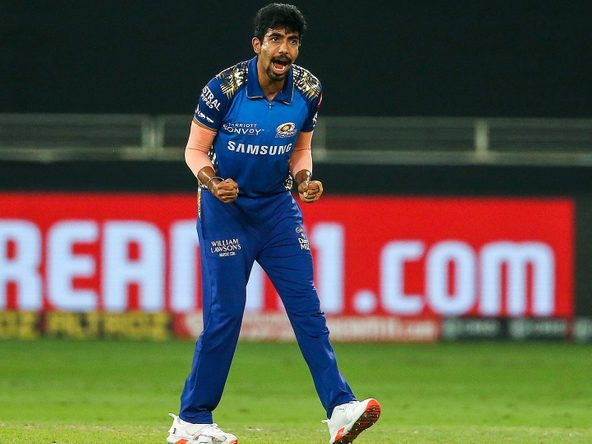 Speedster Jasprit Bumrah returned with figures of 1/14 in his four overs and bowled an excellent 17th over in which he only conceded three runs.

Speaking to Cricbuzz after the match, Virender Sehwag remarked that as long as MI has this weapon, they are “unbeatable”. Jasprit Bumrah’s economy rate of 5.66 is 3rd best after Jaydev Unadkat and Rashid Khan in IPL 2021. The 2nd highest wicket-taker in IPL 2020 has picked 3 wickets in as many games in IPL 2021 averaging 22.66.

“He (Bumrah) is Mumbai Indians’ “Brahmastra”; as long as they have the “Brahmastra”, they are “Ajay” (unbeatable)”, said Virender Sehwag.

By “Brahmastra”, he is referring to the invincible supernatural weapons mentioned in the epic of Indian mythology.

SRH collapsed from 129/5 to 137 in a space of nine balls as Trent Boult and Jasprit Bumrah denied the batsmen any chance of slogging in the death overs. Jasprit Bumrah bowled economically and just gave 14 runs in his fours overs including a wicket while Trent Boult returned with the figures of 3-28. Spinner Rahul Chahar also bagged three wickets for MI.  Jasprit Bumrah has picked 112 scalps in 95 IPL games at a decent average of 23.68.

Trent Boult, Mumbai Indians pacer lauded fellow seamer Jasprit Bumrah and said he is one of the best bowlers in the slog overs after the 13-run win over SunRisers Hyderabad at the MA Chidambaram Stadium on Saturday.

Virender Sehwag: Mumbai Indians Are The Best Team Of IPL For Ability To Defend Low Totals And Can Chase Down High Targets

The comments come after Mumbai Indians successfully defender another low total of 150 to win the game by 13 runs. Virender Sehwag also added that the reason they are the top-most team in this tournament is that they have the resources to defend low totals and also chase down high titles.

“When Jonny Bairstow hit plenty from Krunal Pandya’s two overs, that is why [Kieron] Pollard was brought on. They thought the way Vijay Shankar bowled, even Pollard could be useful the same way. That’s when I thought that we might get to see Hardik Pandya bowl as well. He is good at bowling the slower balls.”

” His pace has decreased due to back problems and doesn’t bowl as fast as he used to but he’s good at changing the pace of the ball. This is why we say Mumbai Indians are the best team of this tournament; that is because they can defend low totals and also chase down high targets.

“In the bowling department, they have Boult, Bumrah, Rahul Chahar and all three did their job very efficiently,” Virender explained Sehwag.

Trent Boult and Rahul Chahar, too, were excellent on Saturday night against David Warner-led SRH. While Trent Boult pocketed 3/28 in 3.4 overs, wreaking havoc at the death, Rahul Chahar turned the game to his team’s favour with an exceptional spell in the middle overs.

He finished with figures of 3/19 in 4 overs. Not only did he take wickets, but he also dented SRH’s chances of a win by stemming the run-flow considerably.

This result means MI has won two of their first three IPL 2021 games, while SRH continues to reel at the bottom of the table with three losses on the trot. MI had lost to RCB but won against KKR and SRH.

None Can Underestimate Any Franchise In IPL 2021: Anrich Nortje