Star Wars star John Boyega posts a throwback photo of a Rise of Skywalker script page now that fans don't have to worry about spoilers. 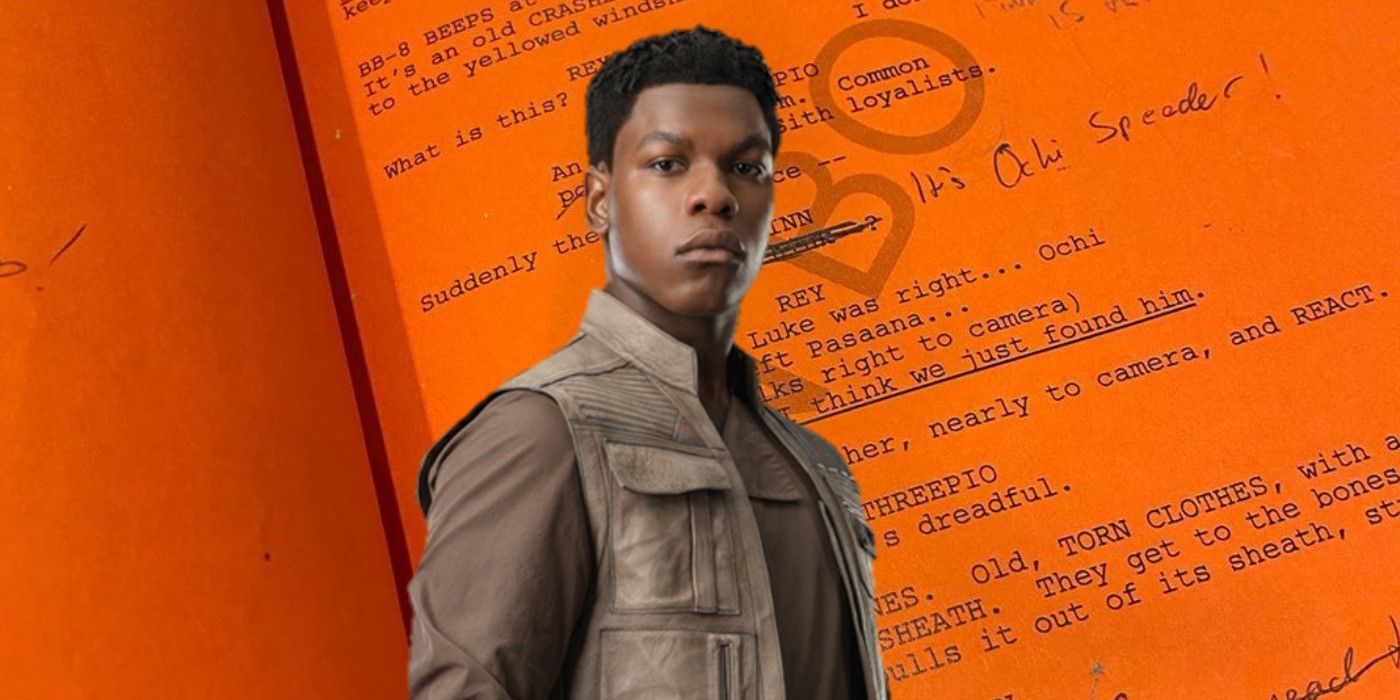 Now that Star Wars: The Rise of Skywalker has been out in the world for several months, star John Boyega has offered fans a look inside his script with a new picture. Boyega once again played Stormtrooper-turned-rebel Finn in The Rise of Skywalker, which effectively brought his journey to a close. Finn was one of the new characters introduced in 2015's The Force Awakens, the first of Disney's many planned Star Wars films, alongside Rey (Daisy Ridley), Poe Dameron (Oscar Isaac), and Kylo Ren (Adam Driver). Boyega has been open about how he doesn't expect to play Finn again, either in a film or on a Disney+ series, meaning The Rise of Skywalker really is the end.

Boyega has also been open about his disappointment regarding certain aspects of Disney's sequel trilogy. While Finn got off to a promising start in The Force Awakens, some fans thought his story was derailed in The Last Jedi when he went on a lengthy side-quest with Rose Tico (Kelly Marie Tran). Things didn't improve with The Rise of Skywalker, which seemed to keep Finn closer to the sidelines. Boyega has also drawn some fan ire after throwing shade at the popular pairing of "Reylo," or Rey and Kylo Ren.

Deciding to take a trip down memory lane, Boyega shared a script page from The Rise of Skywalker online earlier on Thursday. The scene looks to be from Finn, Rey, and Poe's trip to the desert planet of Pasaana while searching for a Sith Wayfinder. It's interesting to see how the scene is written, as well as Boyega's own notes. You can see it for yourself in the space below:

The scene in question also references one of the more (arguably) frustrating elements of The Rise of Skywalker. Just before the scene Boyega shared, Finn started to tell Rey something important, but was unable to after they fell into a sinking sand pit. Finn's supposed secret was brought up several more times, but at no point did the film actually reveal what that secret was. Fans thought Finn was just trying to share his romantic feelings for Rey, but in reality, Finn merely wanted to tell her he's Force-sensitive.

The script page isn't the only behind the scenes tidbit Boyega has revealed in recent weeks, as he also posted a video of him and Isaac on set. Considering how much fans adore Finn and Poe's relationship, it definitely made them happy. While this page isn't quite the same as a video, it's still a nice glimpse behind the scenes. Now that The Rise of Skywalker is available on both Disney+ and home release, fans can revisit it and see how well the script matches up with the movie.