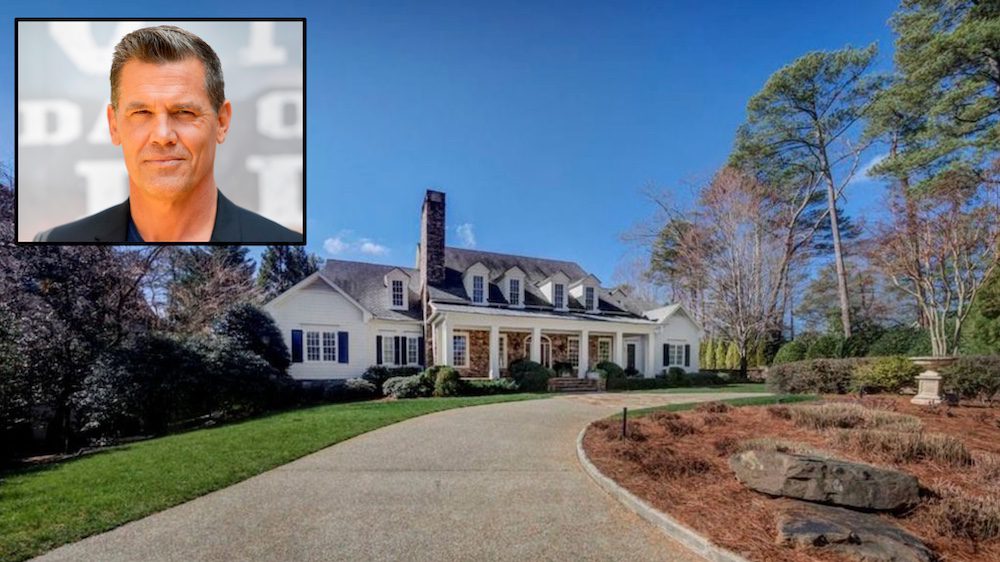 The actor Josh Brolin and his wife, Kathryn, have switched coasts and bought a home in Georgia. Last month, Kathryn took to Instagram and announced that the couple had left California behind.

In July, they purchased a $3.25 million estate in Atlanta’s Chastain Park. Due north of the city’s popular Buckhead neighborhood, Brolin’s new digs are about 15 miles north of downtown Atlanta.

Built in 2003, the custom-built mansion offers five bedrooms, 5.5 bathrooms, and over 6,400 square feet of living space.

The home sits on 1.48 masterfully landscaped acres, and as you pull into the circular driveway, the first thing you’ll notice is the spectacular porch. When it was on the market, the stately residence was marketed as being “situated for maximum privacy.”

The gourmet kitchen features a center island with a gas stovetop, two sinks, and plenty of cabinet storage. Next to the kitchen is a two-story great room, with an abundance of natural light and ample space to spread out.

A dining room offers views of the front porch, the beautiful foyer, and living area. On the main level, you’ll find the master suite, with an adjoining sitting area.

On the upper level are three bedrooms and bathrooms, with two separate sitting rooms. The lower level features a guest bedroom with a bath, theater, gym, a large play area, and even more storage space.

Ideal for an extended family, or for folks expecting a lot of out-of-town guests, the property also has a detached, two-bedroom, 3.5-bathroom guesthouse with a full kitchen of its own.

The listing details describe the smaller residence as “built for special guests to stay for long periods of time.”

The home also has a three-car garage, mudroom, and a large laundry room. A covered porch overlooks the gorgeous pool, with its cascading stone waterfall.

The wood-paneled, screened porch features a stone fireplace with a grilling area.

Brolin, 52, is the son of the actor James Brolin. He embarked on his big-screen career in 1985, with “The Goonies.” He went on to star in a number of critically acclaimed films, including “No Country for Old Men,” the “Avengers” trilogy, and “Sicario.”

Don’t Bet On Aliens: Phosphine Is Amazing, But Doesn’t Mean ‘Life On Venus’