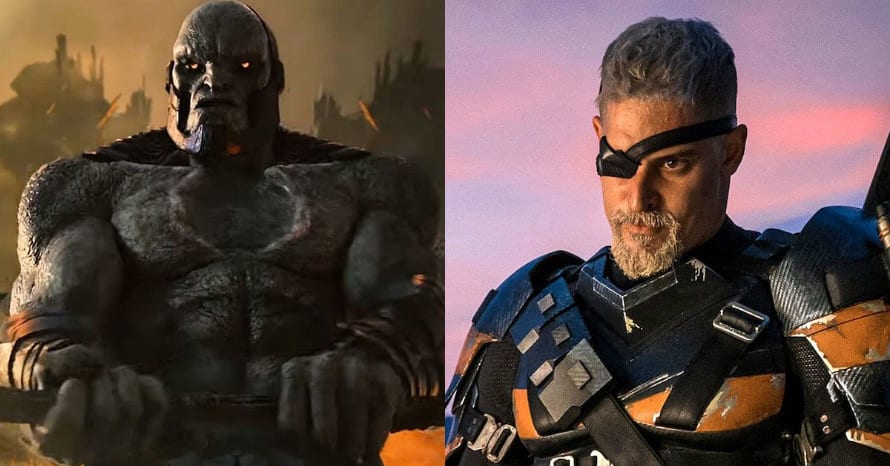 Although the recent teasers for Justice League have all focused on the heroes of the DC Extended Universe, the latest batch of footage highlights the villains in the film, mainly Darkseid and his Apokoliptian forces. But surprisingly, Joe Manganiello’s Deathstroke and Jared Leto’s Joker also briefly make appearances in shots taken from the Knightmare sequences. The teaser doesn’t focus much on the present day portion of the film, instead offering more of a look at the post-Apokolips timeline.

Ezra Miller’s The Flash and Ben Affleck’s Batman also show up in their respective suits which have been adapted to for their new reality but the real focus is on Darkseid’s booming narration as he explains how the whole of existence will become his. It looks like he might be speaking through a projection via the Motherbox at the end – simply because he takes on a very metallic look rather than his typical stony image. Take a look at Darkseid and Deathstroke in the new Justice League teaser below.

OTHER: Justice League teaser with Darkseid (volume amplified) from DC_Cinematic

What do you make of the new teaser? Do you like the look of Darkseid in action? Are you excited to see more from Deathstroke? Sound-off in the comments below!

Zack Snyder’s Justice League cut is expected to hit WarnerMedia’s HBO Max on March 18, 2021. Stay tuned for the latest news regarding Darkseid, Deathstroke and the Zack Snyder Cut, and make sure to subscribe to our YouTube channel for more content!

How Much is Survivor Changing In Order to Still Air in...