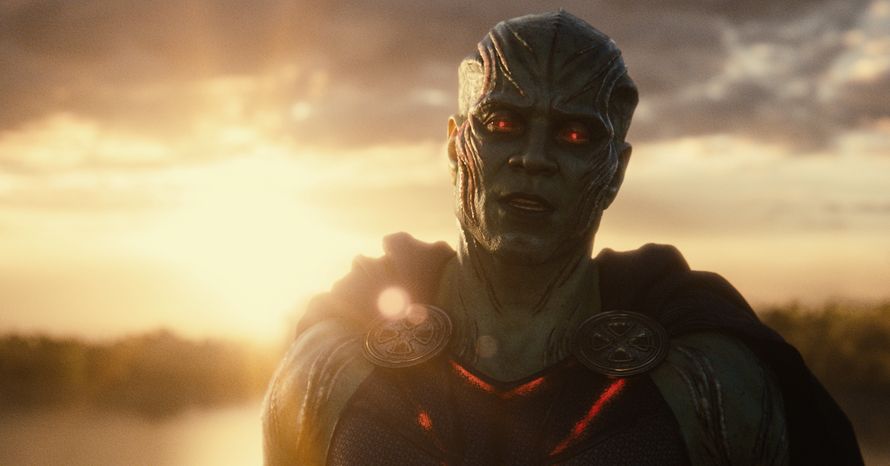 In May 2020, it was officially announced that the Snyder Cut would see the light of day on HBO Max. Months later and fans can now enjoy the epic four-hour cut from the comfort of their own home. In addition to seeing what was left on the cutting room floor with the theatrical version, Snyder also added some bits to his cut, such as the new Knightmare sequence at the end with Jared Leto’s Joker and the debut of Harry Lennix’s Martin Manhunter.

“Martian Manhunter was a late add even to this. Zack [Snyder] had had some concept art drawn for Martian Manhunter. He had also shot a little green screen insert for Harry [Lennix] in the hallway. For the Bruce Wayne scene, Harry was, I believe, in New York shooting something. So they had arranged to get him into an ADR booth to deliver lines. And we had asked if they could put some tracking marker dots on his face and set up a couple of witness cameras so we could watch, so we could use all that footage to drive the asset. We weren’t able to get a scan of him and anything we did with his likeness we had to do based off of photos of him or footage of him off of the other films or off the internet. Zack had given us this one painting, maybe it was two, of his sort of idea for Martian Manhunter.” Hirota went onto explain the next steps in the process of achieving Harry Lennix’s Martian Manhunter’s look for Zack Snyder’s Justice League like giving him more of an alien appearance:

“We started sculpting. We gave all this reference to our sculptors and they started sculpting Manhunter based off Zack’s concept art while trying to maintain features from Harry. When we’d get to certain milestones, we felt like, okay, well, this is a good base. Like, we’ll send it to Zack and [visual effects supervisor] John ‘D.J.’ Des Jardin and ask them, how do you guys feel about this. Then it was like ‘make the biceps bigger or the legs bigger or smaller.’ One thing that Zack wanted was to make sure to take out some of the volume on the temples so that the Manhunter skull was small. It was narrower than a human skull because he thought that would look more alien and also not look like we could have put an applique on a person because of the negative space. There were just a few rounds of going back and forth to push the design one way or another based on their impression of it. And then in parallel, there were other guys processing the footage of the facial performance to drive the face rig that we made for the digital Manhunter. In a different department, people were blocking out the animation. We did a mixture because we didn’t have Harry to do motion capture. We did some motion capture based on what Harry was doing. We had another, just one of our artists, essentially mimic him to drive that. And then we processed that motion capture and gave it to our to animators to use as a basis to key frame on top of.” Since Harry Lennix’s last Martian Manhunter scene was a late addition, Scanline also had to recreate Bruce Wayne’s lake house based on what they had from Batman v Superman:

“The whole visit at the lake house… all that we had to recreate from whatever archives we had from Batman v Superman or photos. None of that existed. Ben [Affleck] was just on a green stage for the footage that was shot for this version of Justice League.” Zack Snyder’s Justice League is now available on HBO Max. Stay tuned for the latest news regarding Harry Lennix’s Martian Manhunter, the future of the DC Extended Universe, and make sure to subscribe to our YouTube channel for more content!

Game of Thrones Ended 1 Year Ago Today: What The Backlash...