The former top Ukraine policy officer on the NSC staff compares the administration to an authoritarian regime in new op-ed. 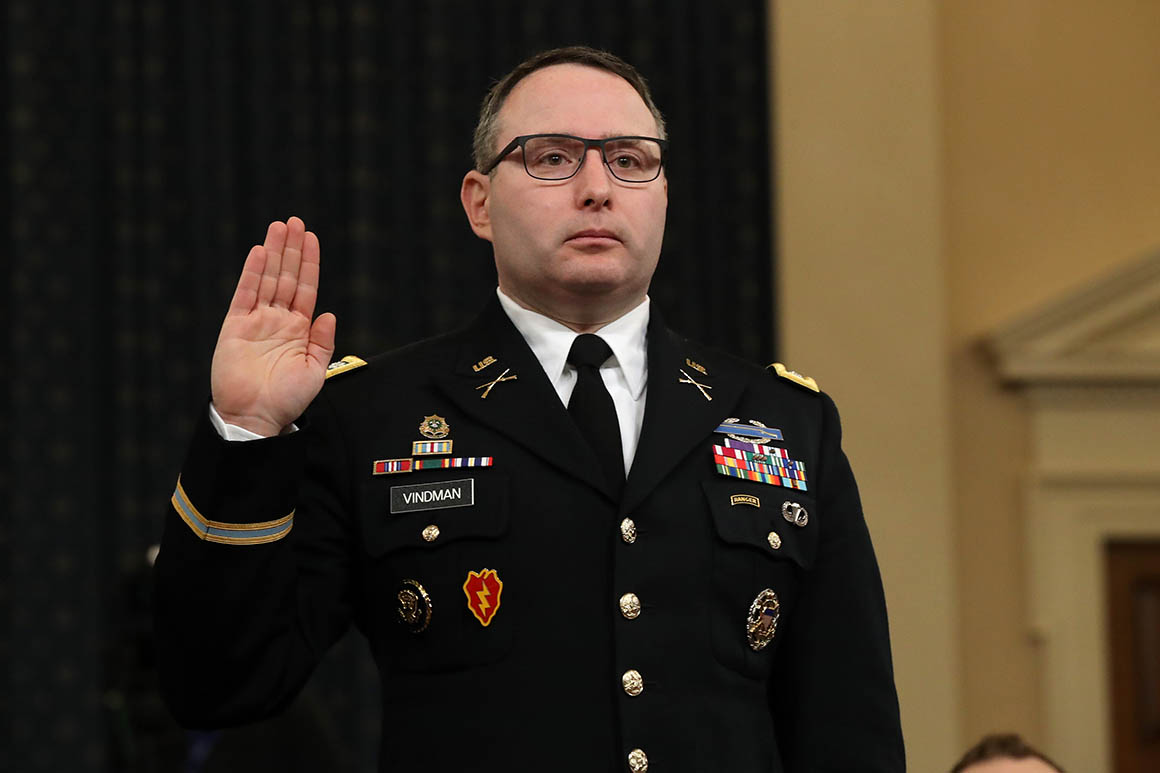 Lt. Col. Alexander Vindman, a key witness in the House’s impeachment inquiry, issued a scathing rebuke of President Donald Trump and his administration in an op-ed published Saturday.

“At no point in my career or life have I felt our nation’s values under greater threat and in more peril than at this moment,” Vindman wrote in the Washington Post. “Our national government during the past few years has been more reminiscent of the authoritarian regime my family fled more than 40 years ago than the country I have devoted my life to serving.”

Vindman’s comments come on the first day of his retirement from the military. The Iraq War veteran and Purple Heart recipient, who until February served as the top Ukraine policy officer on the National Security Council staff, cited a lack of career advancement due to “bullying, intimidation and retaliation” by Trump and his allies as reasons for his decision to retire.

“The circumstances of my departure might have been more public, yet they are little different from those of dozens of other lifelong public servants who have left this administration with their integrity intact but their careers irreparably harmed,” Vindman said.

Vindman testified in last year’s impeachment inquiry, telling congressional lawmakers that he raised alarms about Trump’s call with Ukraine’s president in which Trump appeared to make U.S. aid to the country contingent upon an investigation of Democratic political rival Joe Biden and his son’s business dealings.

Trump, who was reported to have privately fumed over Vindman’s testimony, relentlessly attacked the Ukraine expert in tweets before firing him in February, saying he was “insubordinate.”

Reaction to Vindman’s op-ed was swift online, with some of Trump’s ardent supporters, including Republican Rep. Lee Zeldin, coming to the president’s defense.

“Vindman is no martyr,” Zeldin tweeted. “He lied under oath about not knowing who the whistleblower was. He falsely claims to be a chain of command guy, but didn’t use his chain of command to speak to Tim Morrison.”

Vindman also chastised Trump’s response to the coronavirus, saying the “mendacious president” downplayed the threat the pandemic posed to the country’s residents.

“Millions are grieving the loss of loved ones and many more have lost their livelihoods while the president publicly bemoans his approval ratings,” Vindman said.

Norma Gigaba released on bail, to appear in court on Monday [update]

Lotto and Lotto Plus results for Saturday, 1 August 2020