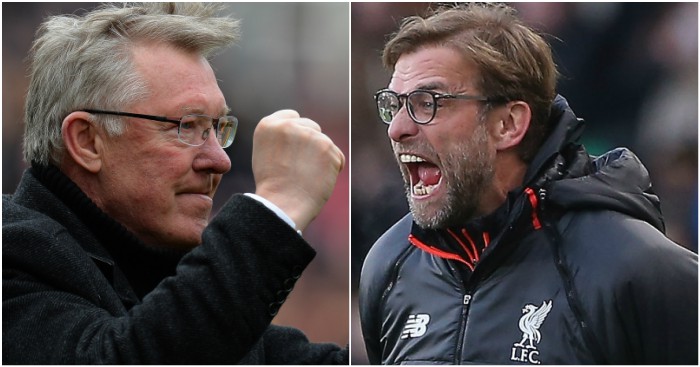 Liverpool manager Jurgen Klopp has apologised to Sir Alex Ferguson for waking him in the early hours and admits contact between him and the former Manchester United boss is rare – especially now they are Premier League champions.

Ferguson sent a congratulatory message to the German when the Reds’ 30-year wait for the league title was ended in June following Manchester City’s defeat at Chelsea.

By the time the celebrations at the team hotel had subsided and Klopp had returned to his room it was only a couple of hours before dawn and the Liverpool boss did not anticipate the 78-year-old Scot would still have his phone by his bedside when he sent his response.

“The problem was that I came back late in my room that night and I couldn’t sleep immediately so I went through the messages I got and one of them was from Alex Ferguson,” he said.

“I just replied in a very polite way I think. It was about 3.30am-4am and I didn’t expect him to have his phone next to his bed. I didn’t want to wake him up. If that happened then sorry Alex!

“But since then we have not been in contact. He is still the former Man United manager and I don’t think he wants to talk to me too much about the success of Liverpool.

“He respects it but it’s not his favourite thing to watch on television!”

“I’ll forgive you for waking me up at half-past 3 in the morning to tell me you’d won the league!”

Liverpool begin the defence of their title at home to newcomers Leeds, themselves back in the Premier League after a 16-year absence.

Despite having sated the desire for a long-awaited title Klopp has no intention of allowing his players to take their eye off the ball heading into the new campaign.

“I know Marcelo (Bielsa) said Anfield is not Anfield without supporters and he is right, in one way, but it is still Anfield, by the way. It is our home and we are Liverpool,” he added.

“That should not sound like a threat, but they did not play us very often before and it should feel different for them as well.

“We are ready to work hard and make life more uncomfortable for them than any team last year could against them. If we do not we will suffer.

“Now everything is new and they are fighting for everything and we are champions, leaning back (motioning puffing on a cigar) and we all look at what Leeds are doing.

“We were not doing this and for as long as I breathe we will not be like this. It must be the most intense game Leeds ever had, otherwise we will have more problems than I want to have.”

Arsenal have ‘proposed a formula’ for playmaker who Barca...