Klopp cannot blame the fixtures for a record Liverpool low

Klopp should spare some … The post Klopp cannot blame the fixtures for a record Liverpool low appeared first on Football News -. 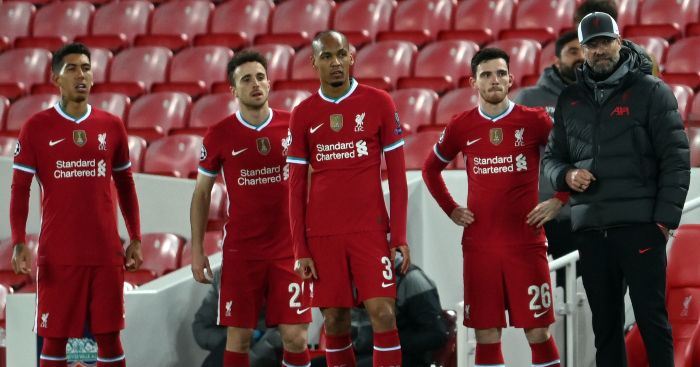 It was an unintentionally perfect summary of the situation. With Fabinho, Diogo Jota and Roberto Firmino already warming up, Steve McManaman noticed Andy Robertson removing his tracksuit. As Liverpool toiled against Atalanta, he declared that all four were to come on in “one fail swoop”.

By the time they did, the visitors had already taken the lead at Anfield. A passage of patient build-up play was crowned by a wonderful Papu Gomez cross to find Josip Ilicic completely unmarked at the back post.

Not that the quadruple substitution made much difference when it did come. Within three minutes a two-goal deficit was established, another free-flowing move that starved Liverpool of a single touch for almost 50 seconds culminating in Neco Williams smashing an attempted clearance against Joel Matip, allowing Gomez and Hans Hateboer to combine for Robin Gosens to score.

One fail swoop followed 60 lifeless, error-strewn minutes preceded half an hour of slightly higher standards that were still nowhere near good enough. It was as if Liverpool drained their batteries to but forgot to keep anything in reserve for three days later.

Jurgen Klopp knew this would come. His have preempted performances like these instead of being brought up as an excuse in the aftermath. He was aware that the effect of airing such complaints would be diluted if it came after chastening defeat. To set his stall out immediately after beating one of Liverpool’s supposed title contenders was no mistake.

If only any of his stand-ins had sent a similar message. Rhys Williams fared well but was liable for the second goal, as was namesake Neco. Kostas Tsimikas was decent yet both full-backs are understandably not even close to the level of Trent Alexander-Arnold or Robertson. Then there is Divock Origi.

He will always have Barcelona, Newcastle, Jordan Pickford and Madrid, but the drop-off from Firmino to the Belgian is enough to induce vertigo. Even when the former was out of sorts he at least offered something. Origi completed eight passes and one clearance with no shots, chances created or dribbles before his substitution.

Klopp perhaps contemplated taking him off in the 39th minute, when Sadio Mane sprang into life to recover possession in the final third before laying it off to Origi, who floated a high ball over the top that required Mo Salah to beat the goalkeeper and two defenders in an aerial battle. Quite what was wrong with a simple through ball is a mystery.

The regulars did not fare much better. Joel Matip looked shaky on the ball, Georginio Wijnaldum was typically good but often outnumbered, James Milner was subdued and both Salah and Mane were completely neutralised by a defence that needed little encouragement but still accepted plenty from a lenient referee.

That will frustrate Klopp the most: that Atalanta’s attitude was far better. Their application and dedication outmatched that of the hosts, who had their limits painfully explored and exposed.

It was precisely the kind of aborted evening from which two obvious winners emerged: Atalanta and . Liverpool had their fewest shots in the first half of a competitive game since January 2017; suffered their first two-goal defeat at Anfield under Klopp; and failed to register a shot on target at home in the Champions League for the first time since such data was recorded.

They remain in control of this group, of course. A draw against Ajax next week secures safe passage to the knockout rounds, and failing that a victory in Midtjylland would do. But these are games that he can no longer afford to rest players in with qualification assured, nor will those safety nets do anything to appease Klopp in the short-term. He spent much of this match remonstrating on the sidelines for a reason. The fixture schedule might have forced his hand but none of the players he called upon can say the same.

There will never be another player or pundit like Roy Keane

Man Utd might have a strategy worth trusting this time…