Replacing the Lagoon 52, the new 55 sailing cat has a newly designed cockpit and aft area, along with a choice of four, five or six cabins. The post Lagoon 55 to Debut at La Grande Motte appeared first on LUXUO. 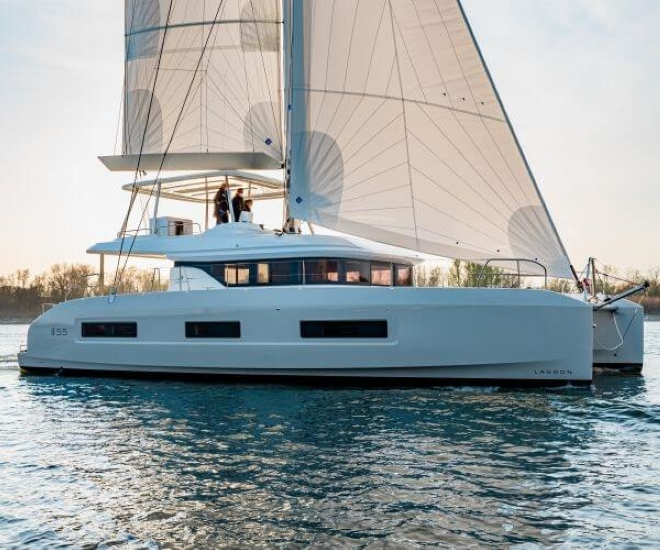 Lagoon plans to stage the world premiere of its 55 sailing cat at the International Multihull Show in La Grande Motte from April 28-May 2, having recently unveiled the prototype from Groupe Beneteau’s Construction Navale Bordeaux (CNB) shipyard on the Garonne River.

The Lagoon 55 – also the name of the brand’s first-ever model launched in 1987 – replaces the Lagoon 52 and features naval architecture by Marc Van Peteghem and Vincent Lauriot-Prévost of VPLP Design, exterior design by Patrick le Quément and an interior by Nauta Design. The lower-deck layout is available with four, five or six cabins.

A newly designed aft area improves circulation on board and creates a large terrace on the sea. The aft cockpit is more open, while the sugar scoops have been designed for easier access and to become additional living spaces.

Le Quement said: “This boat has no straight line, no flat surface. All the lines are drawn taut, all the surfaces are compound. This is done to express strength and quality. This is a completely designed vessel in all its smallest details. Our objective is not to make customers like our boat; we want them to prefer it.”

Other new features include an angled coachroof overhang and raised bulwarks. To increase light and ventilation, the coachroof features overhead windows complementing the side ones, creating an open-air effect.

Massimo Gino of Nauta Design said: “Opening the interiors to such an abundance of natural light allows for a seamless connection with the landscape and the natural environment.”

After the global debut at La Grande Motte in the south of France, the Lagoon 55 will start a tour of the Mediterranean. The first stop will be at the beginning of June at the new Lagoon test base in Port Ginesta, near Barcelona, where journalists and clients will be able to try the boat.
www.cata-lagoon.com

The post Lagoon 55 to Debut at La Grande Motte appeared first on LUXUO.

Absolute 47 yacht tour: A clever package with all the features...