After an eight month stand down to resolve issues revealed during the first mission of… The post LauncherOne reaches orbit on second attempt with NASA CubeSats appeared first on NASASpaceFlight.com. 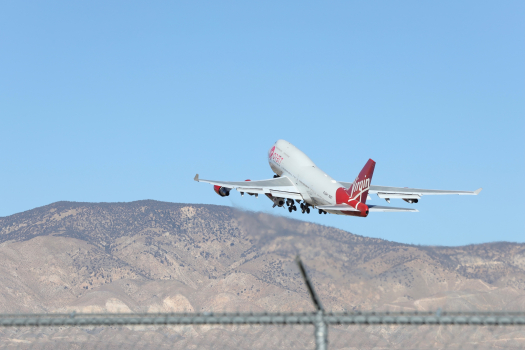 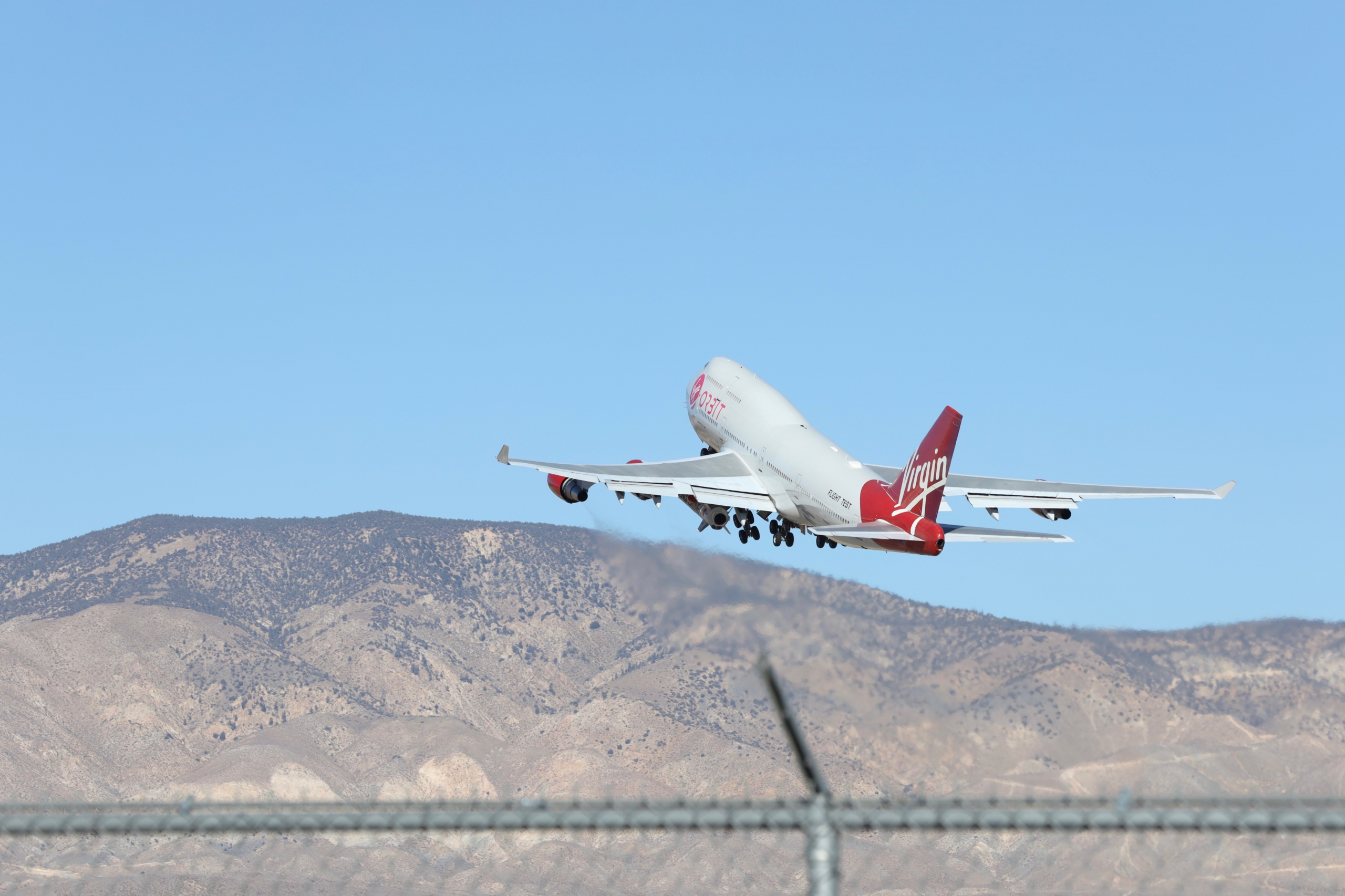 After an eight month stand down to resolve issues revealed during the first mission of Virgin Orbit’s LauncherOne rocket, the company made their second orbital launch attempt on Sunday, January 17. The air-launched rocket successfully carried ten CubeSats to their target orbit for NASA’s Educational Launch of Nanosatellites (ELaNa) program.

The mission began at the Mojave Air and Space Port in California, where the Cosmic Girl Boeing 747-400 carrier aircraft departed for the drop zone over the Pacific Ocean. This is the same location that hosted the first LauncherOne mission in May 2020, which failed shortly into first stage flight.

Virgin Orbit’s investigation into the first flight of LauncherOne revealed a component failure leading to the breach of a high-pressure liquid oxygen line in the first stage. This caused the RP-1 kerosene and liquid oxygen fueled NewtonThree engine to shut down just a few seconds into flight.

Despite the failure and Virgin Orbit’s original plan to fly a second test flight without customer payloads on board, NASA decided to fly the ELaNa 20 mission on Launch Demo 2. NASA procured the launch under the Venture Class Launch Services program.

The ten spacecraft on board will conduct nine missions as part of NASA’s CubeSat Launch Initiative program.

CACTUS-1 is a 3U CubeSat from Capitol Technology University, carrying two payloads. One will trap micrometeorites and microdebris in aerogel to characterize the debris environment of low Earth orbit for future cleanup missions. The other will communicate with personnel on the ground using the Iridium satellite internet constellation. 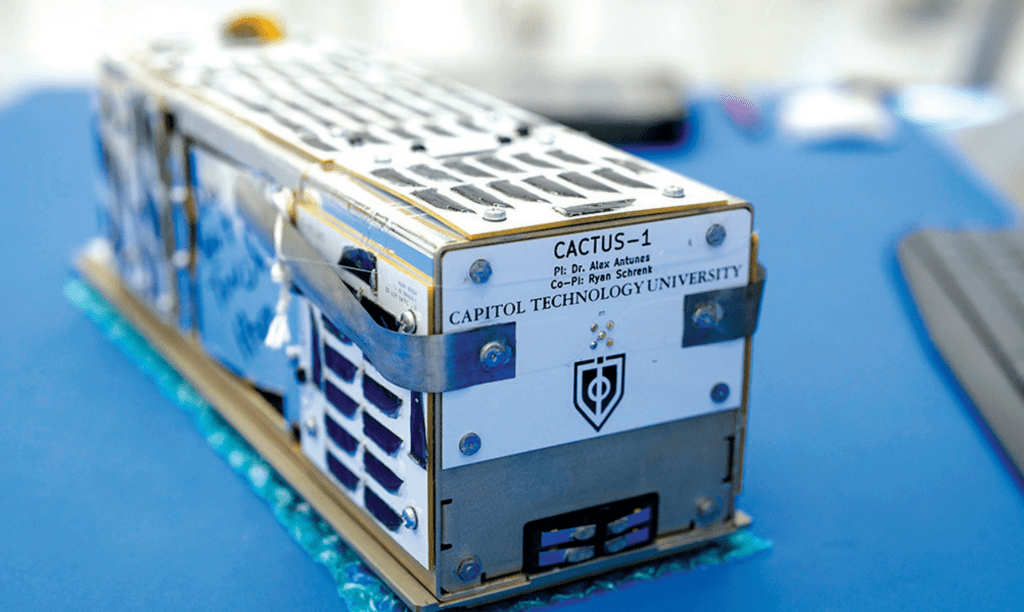 The CACTUS-1 satellite prior to payload integration – via Virgin Orbit

The Cajun Advanced Picosatellite Experiment (CAPE-3) is a 1U CubeSat from the University of Louisiana at Lafayette. Students will be able to set up a ground station and then interact with the satellite using a smartphone app.

EXOCUBE-2 from California Polytechnic University is a re-flight of the original EXOCUBE mission launched on a Delta II in 2015. The 3U CubeSat’s space weather mission will measure the concentration of hydrogen, oxygen, helium, and nitrogen in Earth’s exosphere. The data will help form a better picture of Earth’s climate and refine climatological models.

The Miniature Tether Electrodynamics Experiment (MiTEE) from the University of Michigan is a 3U CubeSat. The main satellite will deploy a smaller, tethered picosatellite body to assess the characteristics of an electrodynamic tether for small satellite propulsion.

Such technology, if viable, could have applications in space-based monitoring of natural disasters as well as space weather.

The Passive Inspection CubeSats (PICS) are a pair of 1U CubeSats from Brigham Young University. Immediately after deployment in orbit, the satellites will boot up and capture photos of the LauncherOne upper stage as part of a demonstration of in-space vehicle inspection — part of a staged approach to inspection, maintenance, and assembly of spacecraft by other spacecraft in orbit.

PolarCube from the University of Colorado Boulder is a 3U CubeSat carrying a radiometer. The spacecraft will collect temperature measurements of Earth’s surface and atmosphere using low-cost remote sensing technology.

Here's what today's takeoff looked like from Mojave Air and Space Port. pic.twitter.com/9Ki0QHFtNk

The CubeSat Particle Aggregation and Collision Experiment (Q-PACE) is a 3U CubeSat from the University of Central Florida. The satellite aims to facilitate long duration experiments studying collisions between dust particles in microgravity.

The dust particles serve as a stand in for a solar system’s primordial accretion disk and will provide key insights into how planets and other objects of solar systems form.

RadFXSat-2 from Vanderbilt University is a 1U CubeSat that will examine the effect of space radiation on microelectronics to better characterize the needed requirements for future space exploration missions.

The final payload is TechEdSat-7 from NASA’s Ames Research Center. The 2U CubeSat will test six new technologies for satellites, including use of a drag device to deorbit satellites from 500 km orbits in just six to eight months when the natural process would take years.

TechEdSat-7 will also test a new encryption for the Iridium L-band, rapid command and control performance of the satellite, a “tardigrade’ omni board with rad-tolerant processors, and two new nanosatellite tracking device concepts.

The pre-flight timeline began the night before launch with RP-1 kerosene loading into both stages of LauncherOne. LauncherOne does not use colder, densified RP-1 like SpaceX‘s Falcon 9 and Falcon Heavy rockets, but rather ambient temperature kerosene like United Launch Alliance‘s Atlas V, so the fuel can be loaded well in advance of flight with no boiloff concerns. 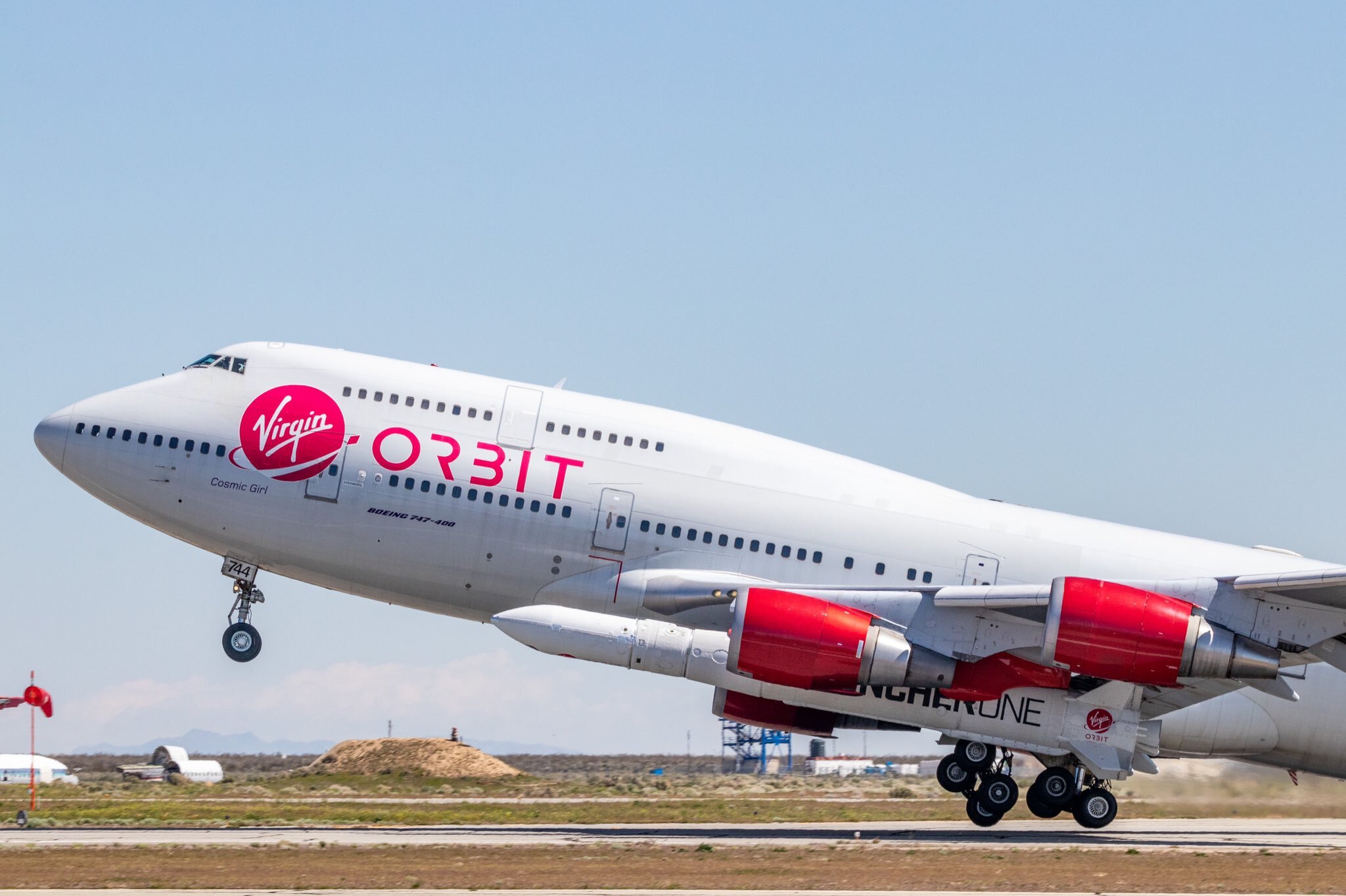 The morning of launch, liquid oxygen was loaded into both stages. Since oxygen is not liquid at ambient temperature, there is a time limit between oxidizer being loaded and launch, as the propellant will slowly boiloff. It is possible Virgin Orbit will work to evolve LauncherOne’s environmental control systems to further reduce boiloff in the future.

The launch teams are polled for readiness and mission control gives the “go” for takeoff at T-14 minutes, which in this case is not the time to launch but instead the time until the aircraft takes off from the runway. When Cosmic Girl lifts off the runway in Mojave at T0, the countdown is at D-58, or 58 minutes before the drop of the LauncherOne rocket.

Cosmic Girl will flew west towards the Pacific Ocean while climbing to an altitude of 30,000 feet. Once over the ocean, the aircraft turned south and aligned itself with the launch azimuth, entering the “raceway” pattern. Cosmic Girl and LauncherOne made one “cold pass” through the drop zone to ensure all systems and weather conditions were go for launch, and then made a 180 degree turn back north, following the raceway.

Once Cosmic Girl turned back south and re-entered the drop zone, the aircraft pulled up to 27 degrees nose up attitude. At an altitude of approximately 35,000 feet, LauncherOne was released from Cosmic Girl. A few seconds later, the NewtonThree engine on the first stage ignited, beginning the trip to orbit. 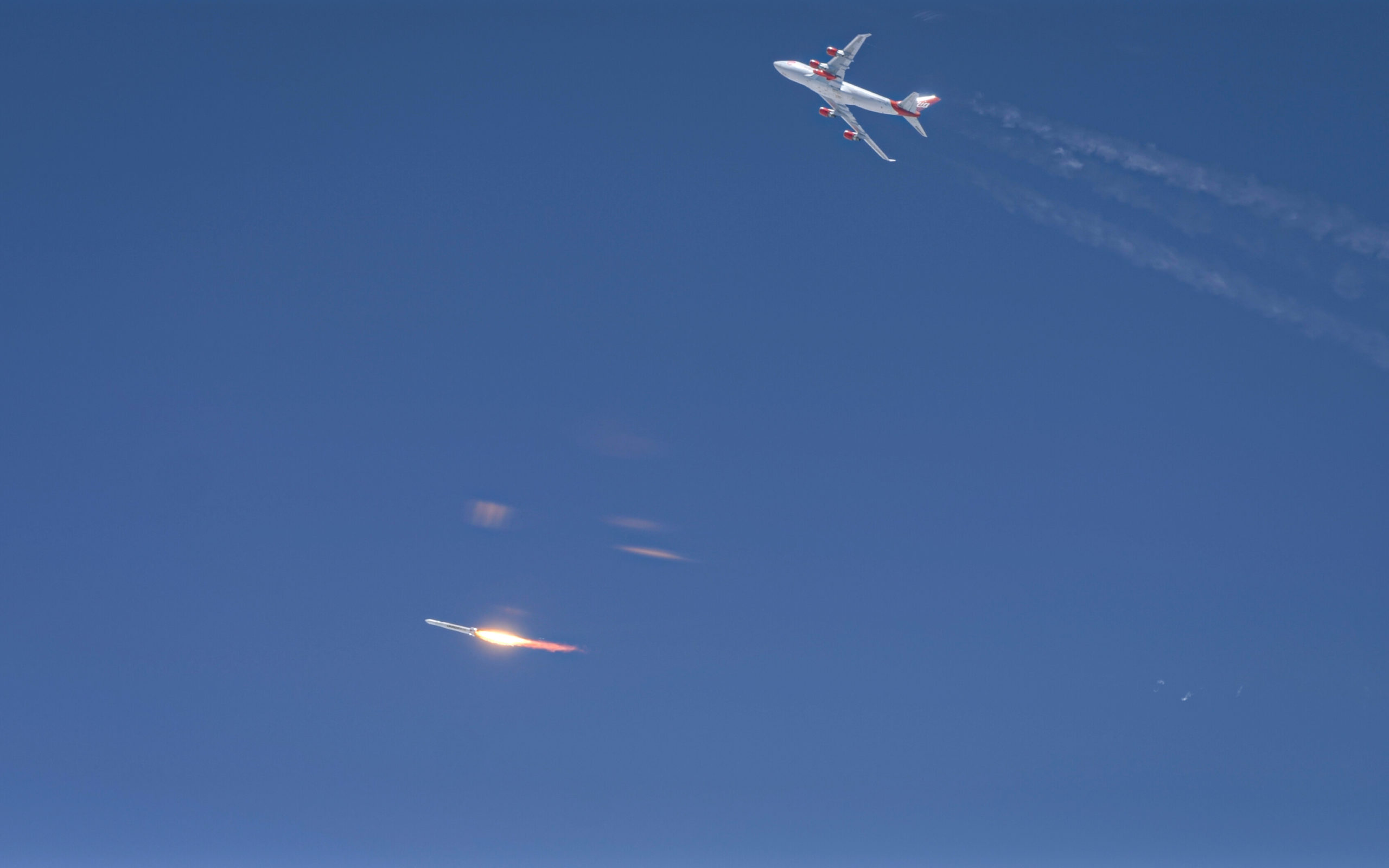 The first stage burns until fuel depletion about three minutes after ignition. Then the stages separate, and the NewtonFour engine on the second stage begins its first burn. The payload fairing which protects the satellites during the atmospheric phase of flight is separated shortly after second stage start.

The first burn by the second stage lasts just under six minutes. The stage then coasts for about 46 minutes before a very brief second burn, lasting less than five seconds. Once the upper stage reached the final orbit, the ten CubeSats were deployed. After all spacecraft have been separated, the second stage performs a deorbit burn to safely and destructively reenter Earth’s atmosphere.

By reaching orbit, LauncherOne has become the first liquid fueled, horizontally launched rocket to do so.

SpaceX ready for Falcon 9 launch with next Starlink mission

Searching for Planet 9 and where new research fits into...