We live surrounded by technology. There are skyscrapers and spaceships. You’re probably reading this over the internet, where the information reached you almost instantly. With all that tech surrounding us, it’s easy to wonder how ancient people got anything done. All of our modern things, however, are based on older technologies. And those were based […] 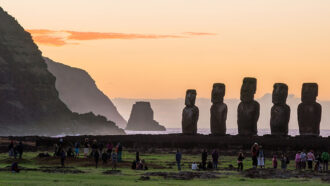 We live surrounded by technology. There are skyscrapers and spaceships. You’re probably reading this over the internet, where the information reached you almost instantly. With all that tech surrounding us, it’s easy to wonder how ancient people got anything done.

All of our modern things, however, are based on older technologies. And those were based on still older ones. Ancient people didn’t necessarily have steel or wheels or electronic communications. Yet they built monuments even bigger than Stonehenge. They raised huge stone heads on Easter Island (and gave them hats). And ancient Egyptians built the pyramids — with huge mystery rooms inside.

Not all of these technologies were limited to modern people. Our Neandertal cousins used tar to stick handles to blades. The first spear-throwers tossed their weapons 279,000 years ago — before modern humans existed. The first “kitchen” flames are older still. Ancient human relatives were cooking food over fires in Europe 800,000 years ago.

Scientists have been trying to figure out how ancient people developed their tools and built their cities and monuments. One investigation technique: Researchers are using modern technologies to peer through jungles in search of Mayan cities. They also are recreating ancient techniques themselves — from rolling pyramid rocks to testing out ancient tar recipes.

Human ancestors threw spears: Who threw first? Scientists long believed that the ancients who lived 80,000 years ago were the first to throw spears with stone tips. Then came the discovery of 279,000-year-old stone spear tips in Ethiopia. These pushed that date back, and now suggest even prehuman species hunted with spears. (12/12/2013) Readability: 8.1

Explainer: What are lidar, radar and sonar?

Picture This: ‘Super-henge’ buried near Stonehenge

From ancient Greece and Rome to the Middle Ages, armies used catapults to bring down city walls. You might not be able to toss huge stones, but you can build a catapult to throw a marshmallow or two. All you need to get started are popsicle sticks, rubber bands and some glue.

BREAKING: Compulsory licensing of Airbnb moves a step closer to reality in Scotland

Health Concerns from Combined Heat and Pollution in South...

Ask Ethan: What In The Universe Is A Fast Radio Burst?

Are Cosmic Rays a Key to Forecasting Volcanic Eruptions?