Some animals, bacteria and algae produce their own light. This bioluminescence can attract mates or protect from predators. 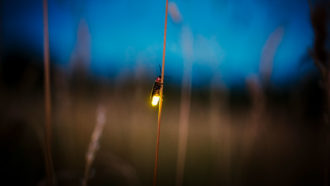 In summertime in North America, tiny lights flick on and off in the evening. Those are fireflies, which some people call lightning bugs. These glowing insects are often a person’s first experience with bioluminescence. This is light that organisms can emit for themselves. Other people might have seen bioluminescence in ocean waters. Some algae make the waves glow in the dark. Deep in certain caves are glowworms. And these are only a few of the many species around the world that can make their own light.

Organisms that glow make their light from chemical reactions. Fireflies have a protein called luciferase. It brings together oxygen and a pigment called luciferin to create light. Other organisms have different ways of getting up a glow.

This glow can serve different purposes. Animals such as fireflies glow to attract mates. Others, such as the glass squid, emit light from under their eyes that makes them invisible to hungry predators below. Undersea tube worms produce mucus that glows on its own. That slime can mark predators with a sticky blue glow for days and serve as a “burglar alarm” if the predator comes near again. And bacteria in the ocean might light up just to hitch a ride. They can get swallowed by a larger animal for a free trip across the sea.

This tube worm’s glowing slime may help sustain its own shine: Light from living things is usually gone in a flash. But this mucus can glow for days (6/5/2020) Readability: 6.7

You don’t have to catch fireflies to create jars full of bioluminescent glow. Try this science activity to make glow-in-the-dark jars.

Sorry, Astronomers: Practically All Of The Universe’s Matter...

Not All Particles And Antiparticles Are Either Matter Or...