DNA is made of two chemical chains twisted around each other. It stores information that allows cells to grow and function. 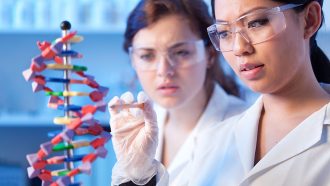 It might not seem like humans have much in common with a sea sponge. People walk around on land, drive cars and use cell phones. Sea sponges stay attached to the rock, filter out food from water and don’t have Wi-Fi. But sponges and people both have something very important in common — DNA. In fact, it’s something that we have in common with every multicellular organism on Earth — and a bunch of the single-celled ones, too.

Deoxyribonucleic acid — or DNA — is a molecule made of two chemical chains twisted around each other. Each strand has a backbone of sugars and phosphate molecules. Poking out from the strands are chemicals called nucleotides. There are four of these — guanine (G), cytosine (C), adenine (A) and thymine (T). Guanine always bonds to cytosine. Adenine always bonds to thymine. This lets the two strands line up perfectly, each with their matched nucleotides

DNA has two main functions: It stores information and it copies itself. Information is stored in the code of the DNA molecule — the pattern of G, C, A and T. Some combinations of those molecules determine which proteins end up getting made in a cell. Other sections of DNA help control how often other bits of DNA code get made into proteins. In humans and many other animals and plants, our DNA is packaged into large chunks called chromosomes.

To make new copies of a DNA molecule, cell machinery first pulls the strands apart. Each strand acts as a template for a new molecule, built by matching the nucleotides on one strand with new nucleotides. This is how cells double their DNA before they divide.

Scientists can study DNA to find out clues to diseases. DNA can also teach us about human evolution and the evolution of other organisms. And hunting for bits of DNA we’ve left behind can even help solve crimes.

By not including everyone, genome science has blind spots: Little diversity in genetic databases makes precision medicine hard for many. One historian proposes a solution, but some scientists doubt it’ll work. (4/3/2021) Readability: 8.4

What we can — and can’t — learn from our pets’ DNA: Your dog or cat’s DNA is an open book. DNA tests tell people about their pet’s breed and attempt to predict things about its behavior and health. (10/24/2019) Readability: 6.9

The rest of your DNA

Educational and delicious? Sign us up. Here’s how to make a DNA molecule out of candy. Then, pull it apart and see if you can make it replicate. Or just eat it, that’s an option too.

Pesticides can have long-term impact on bumblebee learning

This high-tech sweeper is designed for super-clingy moon...