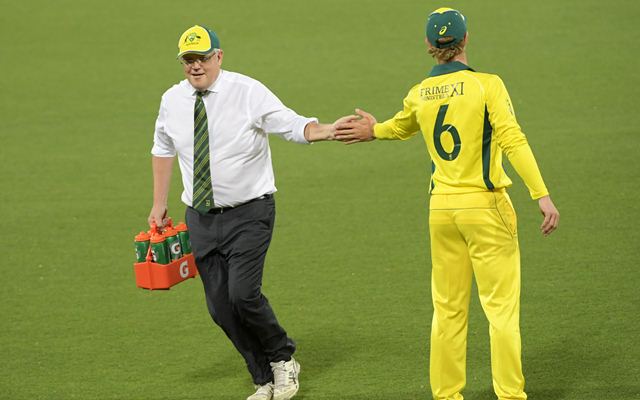 “Cricket and politics don’t mix,” says a politician who ‘filled in’ as an overweight water boy during a limited overs match in order to increase his everyman appeal amongst 35-65 year-old male voters living in suburban Sydney and Brisbane.

Responding to Cricket Australia’s decision not to use the term ‘Australia Day’ in its advertising, the man – who would politicise having a wank if it meant picking up a few extra votes in marginal seats – said the organisation should stick to its knitting.

“You won’t see me running around on a cricket ground like a fucking idiot just to improve my likability rating. A bit more focus on cricket and a bit less focus on politics would be my message,” said the man who tried to divert attention away from his utter ineptness during the country’s worst ever bushfires by talking about Australia’s chances in its test series.

The man – who rebranded himself ‘Scomo’ because it tested well in focus groups and who has a team of image managers who take photos of him doing fucking inane things, including pretending to play cricket – said Cricket Australia should take the non-political approach and name a cricketing match after a government-created public holiday.

“It’s just not cricket,” the man said, not realising he’d actually fucking used a cricketing term to make a political point, before heading off to Bunnings to politicise his hardware purchases.