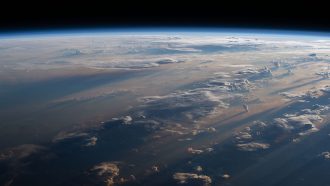 Two tiny discs rise upward, hovering in midair as bright light illuminates them. “I see it!” gasped Mohsen Azadi. He and several fellow PhD students cheered with excitement. They had helped to discover a new way to fly.

There were no motors or propellers to lift the discs. Bright light had done the trick. It was the first time anyone had used light to levitate objects large enough for unaided eyes to see. As the two discs floated, they spun and passed each other. “It looked like a dance,” says Azadi at the at the University of Pennsylvania in Philadelphia.

His team’s innovation could pioneer to a new way to explore a part of Earth’s upper atmosphere called the mesosphere, says Igor Bargatin. An engineer at the University of Pennsylvania, he led the new research.

In the mesosphere, there is “not enough air for airplanes or balloons, but too much air for satellites,” he says. Rockets can blast through, but they remain for just a few moments before falling back to Earth. Since this region is so tough to explore, scientists know very little about it. Some call it the “ignorosphere,” notes Bargatin.

He, Azadi, and the rest of the team flew their discs in a chamber filled with the same concentration of air as the mesosphere. That thin air happens to be perfect for levitation with light. The team described its success February 12 in Science Advances.

The magic of science

“Levitation has a bit of a magical quality to it,” says Bargatin. It does seem magical that light could lift anything, even something very lightweight. In fact, this is possible because light particles transmit energy in the form of heat. When that heat results in movement, it is called the photophoretic (Foh-toh-phoh-RET-ik) effect. Scientists have long known this effect can make microscopic specks move around.

The effect is also what spins the paddles inside a toy called a light mill. A light mill that sits on a shelf in his lab inspired Bargatin to try making discs levitate.

The photophoretic effect could only lift something very lightweight. But that’s what his team was already working on. For years, they’d focused on building extremely light but rigid structures. “They are the lightest objects you’ve ever seen,” says Bargatin. Some are thinner than soap bubbles. “Invention or innovation is not something mysterious or magical,” says Bargatin. “It’s the process of combining previously known ideas in new ways.” In this case, the team wondered what would happen if they used the photophoretic effect on very thin, lightweight materials.

The material they used for the discs is a clear plastic film called mylar (MY-lar). They used the thinnest mylar available. It’s just half a micron thick. That’s one-two hundredth the thickness of a human hair. If you try to hold a piece of it, says Azadi, “it just curls up and sits on your finger.”

The researchers painted the bottom side of each mylar disc with carbon nanotubes. They act “like a shaggy carpet,” says Bargatin and help the disc hold its shape. And they also help it lift off.

To achieve lift-off, the team placed its discs in a chamber and pumped out most of the air. They also switched on bright LED lights. Those lights heated the discs. At the same time, particles of gas from the thin air crashed into the discs. The gas particles that hit the shiny top side of a disc bounced off immediately. But the ones that hit the shaggy carpet on the bottom side stuck briefly and absorbed heat. That gave those gas particles an extra boost before they bounced away. The energy from the gas particles pushing off the bottom sides lifted the discs into the air.

When physicist Yael Roichman first heard about the new study, “I was kind of skeptical,” she says. She’d used the photophoretic effect to trap particles as part of her research at Tel Aviv University in Israel. But she’d never seen anyone levitate an object of such size using light. When she read the research report, though, she was impressed. “The technique is smart, clever and useful,” she says.

Now that the team has demonstrated their discs can fly, they are working to turn them into aircraft that could study the mesosphere. They’ve already begun experimenting with ways to attach a lightweight sensor to the disc. “I think we will probably use small threads to suspend a chip beneath it,” says Bargatin. The aircraft might look sort of like a floating parachute for a sensor. One day such sensor parachutes may float through the mesosphere. Mars is another potential destination for this type of device. The atmosphere there is about the same thickness as Earth’s mesosphere.

This discovery is super cool, but don’t expect a light-levitating hoverboard to zip you around through the air. The photophoretic effect only works on extremely lightweight objects. If you want to levitate, says Roichman, “stick to superconducting magnets.”

Explainer: What is a neuron?

How Earth Day Lost Its Way

Ask Ethan: Is There A Fundamental Reason Why E = mc²?

Ask Ethan: Are Black Holes Made Of Dark Matter?

Ask Ethan: Why Doesn’t The Afterglow Of The Big Bang Eventually...

36 Alien Civilizations In The Milky Way? The Science Behind...