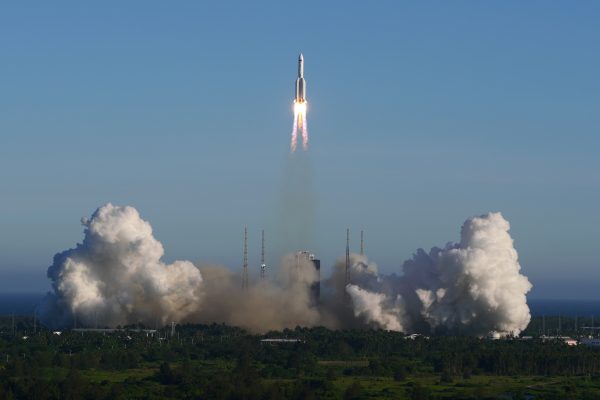 China’s space ambitions took a major leap forward with the successful launch of its Long March 5B (LM-5B) rocket in May 2020. The launch vehicle and test payloads allowed Chinese space scientists to validate critical technologies for building a space station, returning lunar samples and exploring Mars. These projects will allow China to attain a semblance of parity with the United States while retaining its lead over Asian peers in pursuit of a space dream. 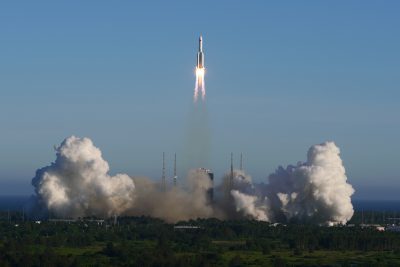 China is the third county in the world to possess an indigenous human space program. It has also constructed space laboratories — Tiangong-1 and Tiangong-2 — but lags behind the United States and Russia by a few decades in managing a complete space station. The LM-5B’s success is critical in filling this gap. Chinese space scientists have unveiled a plan to complete the construction of Tiangong Space Station by 2022 following the successful launch of LM-5B.

China’s human space program and plans for a space station have regional consequences as well. India’s former prime minister Atal Bihari Vajpayee reacted to China’s test of an unoccupied crewed spacecraft in 2003 by urging an Indian crewed mission to the moon. Following a negative assessment of India’s readiness to undertake such an ambitious mission, India initiated robotic exploration of the moon. But China leads in lunar exploration with the successful landing of its Yutu-2 rover on the far side of the moon in 2019, a ‘space first’.

China has more ambitious lunar projects such as lunar sample return mission Chang’e 5 as well as Mars mission Tianwen-1. China is racing to land a rover on Mars, particularly since India emerged as the first Asian country in 2014 to successfully reach Mars on the first attempt.

Although these missions are dependent on the optimal performance of LM-5, the LM-5B validated the redesign of core stage engines it shares with LM-5. Chinese space scientists delayed the LM-5 launch schedule by about two years following its sub-optimal performance during the first two flights. The third LM-5 launch in December 2019 with redesigned engines was successful and the LM-5B launch helped re-affirm the new engine designs.

Validating LM-5 engines is crucial for China’s entry into the High Throughput Satellite (HTS) business and further expansion of its foreign satellite contracts. China’s global customers include Venezuela, Nigeria, Sri Lanka and Laos among others. These governments contracted China to orbit their first geostationary satellites built on Chinese satellite bus Dong Fang Hong 4 (DFH-4) and launched by LM-3B. Recently, LM-3B failed to launch an Indonesian satellite, adding to the existing risk of contracting a DFH-4 based satellite.

China had been experimenting with HTS using DFH-5, an advanced version of DFH-4. It was a DFH-5 based HTS Shijian-20 that China launched on the third LM-5 flight. With successful validation of the DFH-5 and LM-5 combination, China could soon replace the DFH-4 and LM-3B combination currently offered on foreign government contracts in the Global South — traditionally a market for US and European space services companies.

The unlocking of LM-5 capabilities and its other derivatives, LM-6 and LM-7, has advanced safety and industry imperatives as well. So far, China has been relying on Cold War era rockets such as LM-2 and LM-3 to reach low Earth and geostationary orbit. With the successful validation of new launch vehicles, the Chinese space industry is shifting to using a newer and heavier set of launch vehicles. For example, LM-2F, LM-5B and LM-7 are being coordinated under the Three Warriors program to reduce risk and optimise the completion of China’s space station.

The newer launch vehicles also reduce China’s reliance on older launch pads and avoid domestic political backlash. China’s older rockets use toxic propellants and are launched from sites deep in the country. The burnt-out first stage rocket bodies routinely fell on Chinese villages causing damage and leaking pollutants in the countryside. But the LM-5 uses less harmful cryogenic propellants and uses the Wenchang launch site situated on Hainan island, which means the burnt-out rocket bodies crash into the Pacific. Moreover, launching from Wenchang is fuel efficient as the site is closer to the Equator, unlike China’s other three launch sites.

The LM-5/LM-5B and Wenchang combination is expected to shift Chinese space infrastructure away from a technology base nearing the end of its life to a newer set of designs. Going forward, the transition will be eased by about a dozen LM-5B launches required for completing the space station itself.

China is seizing a strategic opportunity to evolve into a space power in all respects. It is gradually expanding human space capabilities in a phased manner starting with orbital launches and then building space laboratories. The LM-5B is critical for the next step of operating a small space station, considered a true mark of space power as China nears the 100th anniversary of the founding of the Chinese Communist Party.

Can COVID-19 spark an energy transition in the Philippines?

Four Arrested and Three Injured as Thousands Strike at...