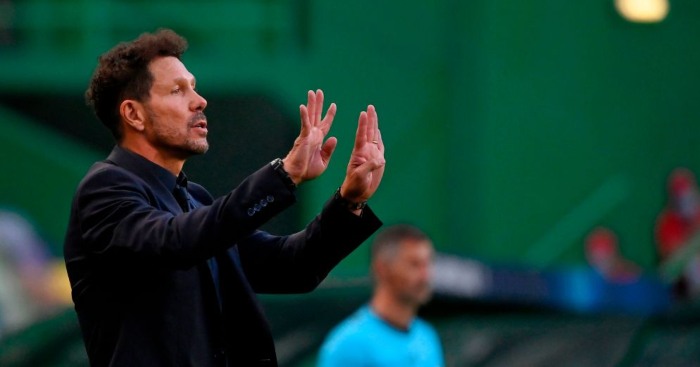 Diego Simeone is just the most wonderful anti-hero. What’s interesting about him, what has always made him so compelling, is that despite being such an obvious villain, Simeone stands opposed to so many of the tedious tendencies of his peers.

We should hate him. He’s associated with so much which is deemed impure. His Atletico Madrid have always worn the dark robes in European football and for good reason. They boast all the game’s nastiest elements, stacked with bastards from 1 to 11. And he revels in that. Their cynicism is his art and the more attritional and antagonising his players become, the more enraptured in their performance he seems to be.

Everything. The heart and soul. The rhythm to their performance, the difference between winning and losing. Simeone’s team don’t win many friends. At their worst, they’re a gang of pirates. But people gravitate towards their coach because he doesn’t pretend that the game is something that it’s not.

It’s not bloodless, it’s not dispassionate. Atletico aren’t just clever passing triangles and technical precision and they aren’t claiming to reinvent any part of the game and claim it as their own. And people like that. People feel it. It’s makes Simeone and Atletico a counter-point to all that’s fashionable. They grind, others glide.

It also makes them an unusual neutral’s favourite for the European Cup. With Atalanta eaten by the PSG monster, Atletico were the only club left capable of producing a satisfying outcome. It’s not to be. If European football has taught us anything, particularly over the last 24 hours, it is that it’s usually the team that nobody can love that wins.

Energy Drink United are through; they’ll face the Qatari Public Relations experiment in the semi-finals.

This wasn’t pretty. In fact, it was a contest which began in the 12th round, with two knackered fighters leaning up against each other, trading tame rabbit punches in the centre-circle. Dayot Upamecano should have scored, but – unmarked – he headed straight at Jan Oblak from the penalty spot. Yannick Carrasco might have struck earlier in the first half, but Peter Gulacsi’s wrists held firm at his near post.

So far, so awful. Simeone had loved every minute though, as he tweaked this and that. That’s another thing about him: it’s sincere with him. The way the game – even this game – moves him is genuine. The pose du jour is more of a detached cool, but he coaches in a maniacal frenzy, living on every five-yard pass and demanding every throw-in.

He is what he was as a player. He’s older and he’s put on a suit, but that’s really the only difference. That gnarled intensity is the same and so are all the facial expressions.

History will remember him kindly, too. Perhaps some of Simeone’s appeal lies in the teams he has so often faced as rivals. The ludicrous pomposity of Real Madrid and the tedious self-regard of Barcelona, for instance. Or, in the last round of this competition, Liverpool’s swollen ego. As a neutral, it’s amazing how often you find yourself in Simeone’s corner.

This was another one of those nights. For the majority of it, RBL were superior. Their patterns were prettier and, after half-time, they had the game by the throat. When Dami Olmo opened the scoring, glancing in Marcel Sabitzer’s cross, that began a period of almost total control in which, with a little more composure, they might have put the game away.

Atletico found a way back, though. Joao Felix danced between the lines, teased a challenge from Lukas Klostermann and then, with the penalty given, picked himself up to equalise.

And suddenly Atletico were better. Then they had the momentum and all the life, and there was something inevitable about the way they were slipping passes between the lines and fashioning crossing angles. They had the heart, everyone thought. RBL are just a marketing platform and this would be one of those times when the good match report got written, and when the reaction pieces wouldn’t just become another regretful mourn about inevitable football is.

No, the marketing platform snatched it away. Right at the death, there was that bloodless precision. Atletico were opened up in the space behind Kieran Trippier and when the ball was cut back, there was Tyler Adams to drive a deflected shot past Oblak.

This is also who Simeone is. He’s a loser in desperate circumstances, to teams that nobody ever wants to see win anything. At full-time, he stood on the touchline, limp and expressionless, as his players collapsed to the floor. Time’s running out, he’ll know that. So do we: all those fans who should hate him but don’t, who would prefer to see him holding the European Cup than anyone now left in this competition.