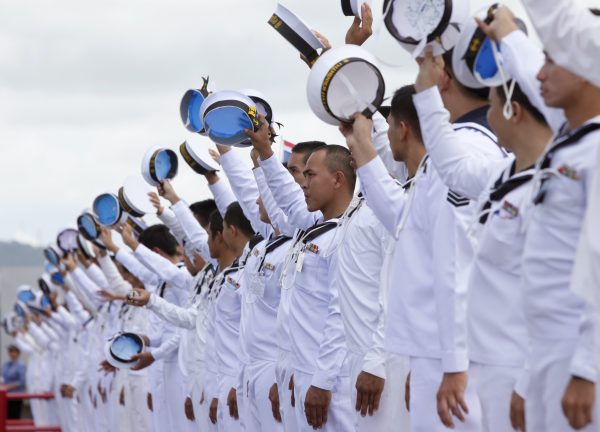 The Royal Thai Navy’s (RTN) maritime and naval strategic thought has undergone a major shift. In 2008, it moved away from its blue-water navy ambitions — epitomised by the aircraft carrier — towards a comprehensive approach focussed on maritime security cooperation, collective defence and non-traditional security threat management. The RTN adopted the 2015 Network Centric Warfare Plan, published the 2015–2021 , and reorganised the Thai-Maritime Enforcement Command Centre in 2017.

In the contemporary age of warfare, continental great sea power states located on Thailand’s geopolitical periphery — China, India and the United States — engage in a whole range of militarised and non-militarised maritime activities.These sea powers seek to achieve specific strategic objectives in the amorphous space of grey-zone conflict without ruinous escalation to high-intensity war. This presents a complicated challenge for defence forces beyond strategising to linear rather than multi-dimensional approaches.

The continental great sea power states have already begun the process of converging land and maritime domains through the ‘continentalisation’ or ‘infrastructuralisation’ of the littoral seas. This process effectively brings to bear a land-centric, multi-dimensional approach to strategy and applies it to the maritime domain.

In response a research report on Maritime Security was forwarded in 2016 to the Thai National Assembly. It concluded that the RTN was no longer capable of securing its five maritime interests: sovereignty, security, prosperity, sustainability and honour. It also recommended a more flexible approach to maritime strategy and a more responsive posture in view of real-world circumstances.

Subsequently issued national policy documents, including the 2018–2037 and the 2019–2022 , point to the same emerging grey-zone security challenges. But in practice, the policies and strategic thought endorsed in these plans essentially preserves the army-dominated status quo.

Michael Handel counsels that warfare in the contemporary age is far too complicated for a single comprehensive strategy or concept of security. Still, the concept of Hybrid Maritime Warfare (HMW) could help the RTN upgrade its doctrines and adjust effectively to its new operating environment.

The HMW concept is likely to be viewed favourably by the Thai government. The departing commander-in-chief of the Royal Thai Army, General Apirat Kongsompong, chose to adopt a similar concept, Land Hybrid Warfare, for the army during his tenure. The RTN’s Commander-in-Chief Admiral Luechai Ruddit leveraged this precedent to ‘stop [with] the past, start [with] the new’, opening the door for the HMW concept. The incoming army and navy leadership — General Narongphan Jitkaewthae and Admiral Chatchai Sriworakhan — will likely continue these efforts.

Retired US Admiral James Stavridis proposes in that the HMW concept offers four unique advantages. First, it allows for the destruction of an adversary’s capabilities without attribution, allowing for ‘greater latitude of activity’ to avoid criticism and international sanctions. Second, as the maritime domain is a more fluid environment, ‘it bestows the advantage of surprise’. Third, it gives agents ‘effective control of the tempo and timeline of events, given their inherent ambiguity’. Fourth, ‘it is much less expensive than building the massive and capital expensive platforms needed to conduct conventional littoral warfare’.

Another advantage of HMW is that it helps navies that subsist in a political context where governments lean towards land-centric strategic thought. As Wilfried A Herrmann observed in , ‘the national strategy of Thailand, designed and promoted by the respective [Army-dominated] Royal Thai governments, is not essentially a maritime strategy, but quite continental in its core’.

This land-centric understanding of the national military strategy is anachronistic. Recent technological and political trends point to the convergence of land-centric and maritime strategic concepts in the littoral seas.

The RTN was once prevented from developing a robust sea power capability due to the dominance of the ‘core continental tendencies’, evident in Thailand’s army-formulated national strategy and policy documents. Yet this problem may finally be circumvented through application of the HMW concept. This will enable the RTN to leverage its ‘continental sea power’ identity to achieve its previously outlined maritime interests in the littoral seas, particularly the Gulf of Thailand and the Andaman Sea.

The COVID-19 crisis has accelerated the need for the RTN to adopt the HMW concept. Thailand’s government will be focussed on continental matters for the foreseeable future, seeing that the burgeoning student protests are intensifying the debate over Thailand’s democratisation process. And the threat of a COVID-19 second-wave and an economic crisis loom. These scenarios may thwart any lingering blue-water ambitions expressed through large naval procurement programs, such as the government’s planned procurement of Chinese-built submarines.

Hadrien T Saperstein is a researcher at Asia Centre, Paris.

Solskjaer will not last season at Man United – Murphy

Trump is the name of change says Tarar

Banana Farms in Laos Sicken Villagers, Even as They Provide...

‘What Are They Trying To Hide?’ Uyghurs Ask of China's...