Need a Permanent Vacation? Live the Tiki Lifestyle at This Hawaiian Hideaway

From its living bamboo garden to its hand-carved, double-entry doors of Indonesian wood, this Honolulu home could easily be mistaken for a Polynesian resort. The post Need a Permanent Vacation? Live the Tiki Lifestyle at This Hawaiian Hideaway appeared first on Real Estate News & Insights | realtor.com®. 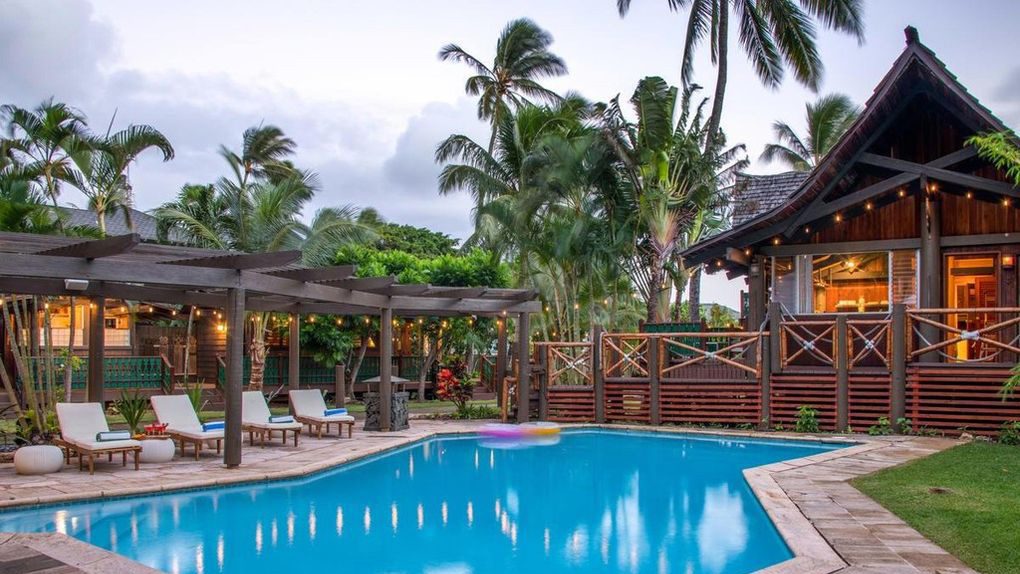 From a living bamboo garden to the hand-carved, double-entry doors of Indonesian wood—plus a koi pond and luxe cabanas—this 9,266-square-foot home near Honolulu could easily be mistaken for a Polynesian resort.

For a buyer in search of a vacation retreat, it might be the ultimate landing spot.

The house itself has all the components of Tiki culture, according to , listing agent with Elite Pacific Properties. Located on the East end of Oahu, 10 miles from downtown Honolulu, the huge property is listed for $5.4 million.

What is Tiki culture?

“It’s a style originating in California in the 1920s, from travelers that wanted to recreate their experiences of the South Pacific, namely Hawaii and Tahiti,” says Lopez.

The tropical look, he says, “has inspired movies, festivals, architecture, and groups all around the world … from Tiki bars in Oregon … to playgrounds in Germany.”

This six-bedroom, five-bath property was built in 1972 by Don and Josie Over. She starred on the original “Magnum PI,” and he was a Polynesian show producer at the Queen’s Surf, a famous Waikiki night spot.

They lived here with their eight children, and also housed kids from the South Pacific who were receiving medical treatment.

“They had real strong connections to the South Pacific culture,” says Lopez.

Subsequent owners have made numerous updates to the home, but haven’t diminished the vibe.

Updates include adding marble-tiled flooring and stainless-steel appliances in the plantation-style kitchen, and converting a former theater room to a bedroom and living room.

A bamboo garden lies just past the front gate, and a stepping-stone path leads to the double-entry doors, which are hand-carved out of Indonesian wood.

A clear-roof atrium features plants and a koi pond for a courtyard effect—plus rock waterfalls and a stream.

You’ll find koa-wood accents throughout the home, including flame-grained koa panels in the living room. Bamboo was also used in abundance, and is in evidence on walls and trim.

Buildings included in the sale are the main house and poolhouse (connected by a trellised breezeway) and cabana wing (two cabanas connected by a bath), along with a heated pool.

The pool area is decorated in a nautical theme, right down to the rope railings.

“It’s not often that you get these large parcels of land, especially this close to Honolulu,” says Lopez.

Another bonus: The property hugs Paiko Lagoon, which restricts swimming and boating. In turn, that means less folks traipsing around your home.

“It has a very unique sense of privacy,” adds Lopez

What kind of buyer is the agent targeting?

“I envision the buyer being someone with a deep connection to Hawaii, whether they currently live here or not,” he says.

“Someone who puts an emphasis on tranquility and privacy in their life, but appreciates being able to spread out in their own domain.”

He says he anticipates a lot of interest from buyers from California, the heart of the entertainment industry, and where the Tiki culture started.

“Two of the previous owners,” he adds, “were high-level producers, and this could easily capture the eye of another individual from Hollywood.”