Nervous Twitch Nervous Twitch Reckless Yes LP | CD | DL | Streaming  Out 29th January Leeds based Nervous Twitch release their self titled album tomorrow via Reckless Yes. It’s their fourth following 2015’s Get Back In Line, 2016’s Don’t Take My TV, and 2017’s I Won’t Hide; all of which were re-released to digital […] The post Nervous Twitch: S/T – album review + interview appeared first on Louder Than War. 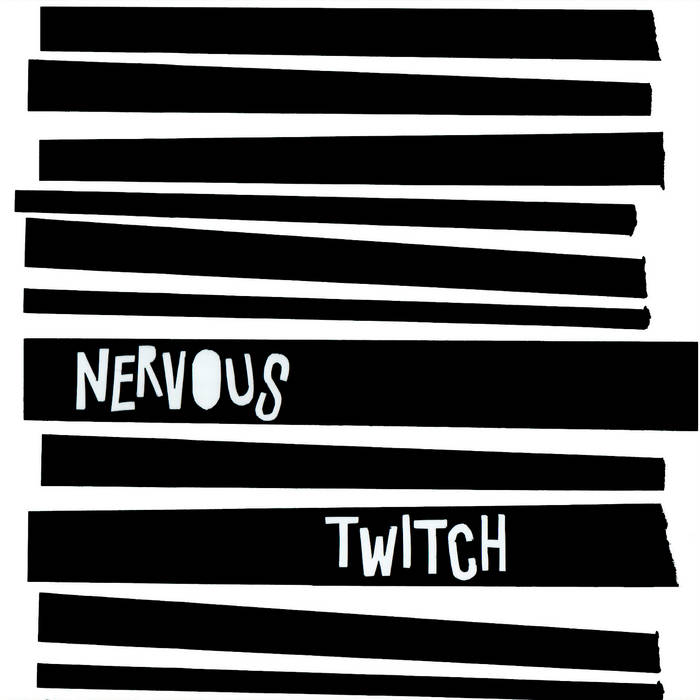 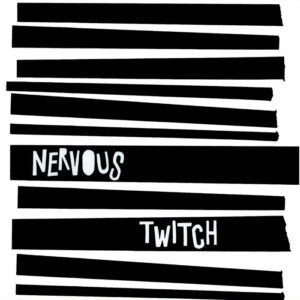 Leeds based Nervous Twitch release their self titled album tomorrow via Reckless Yes. It’s their fourth following 2015’s Get Back In Line, 2016’s Don’t Take My TV, and 2017’s I Won’t Hide; all of which were re-released to digital streaming during 2020.

I always find that there is a bit of a dip with quality new releases between December (which is dominated by compilations) and throughout January so for me this is the first significant release of 2021. I’d been looking forward to hearing it for some time after the three strong singles preceding it, Keeping Faith in Something, Tongue Tied and Alright Lads.

Not only have Nervous Twitch have managed to capture their energetic live performance on this record; with raw catchy pop songs and just about time to catch your breathe between tracks; it looks bloody fantastic too. A stylish black and white sleeve to house the cream vinyl, but more on that later.

As mentioned in previous reviews on Louder Than War, the band they aren’t afraid of having their influences on show (from the 60’s onwards) but rather than being copyists they mix them together to create something unique. Erin’s vocals and bass; Jay’s infectious hooks and buzzsaw guitar are unpinned by Ash’s solid rhythms to create something special.

Rather than do all the talking, Iain Key sat down with the band to discuss the album and all things Nervous Twitch.

LTW : Congratulations on the album, it looks and sounds great. Are you excited that it’s finally out there?

NT : Yes! it’s definitely a project we’re proud of and it has kept us going through the last year or so. It’s been great to share the singles with people and were excited for people to hear the album.

LTW : Erin, you’re responsible for the look/art/image of the album. How important was it for you to have a cohesive package?

NT : I’ve been responsible for all the artwork, merch, record covers etc for as long as the band has been around. It’s important to me that what we’re trying to portray in the music comes across visually. I wanted to create something that was a homage to the cut and pasted aesthetics of zines and posters mainly from the 70s punk era (think Jamie Reid), with influence graphic art created for bands in the 90’s wave of garage punk, but bringing little bit of a modern smoothness and simplicity to it, kind of like our music. 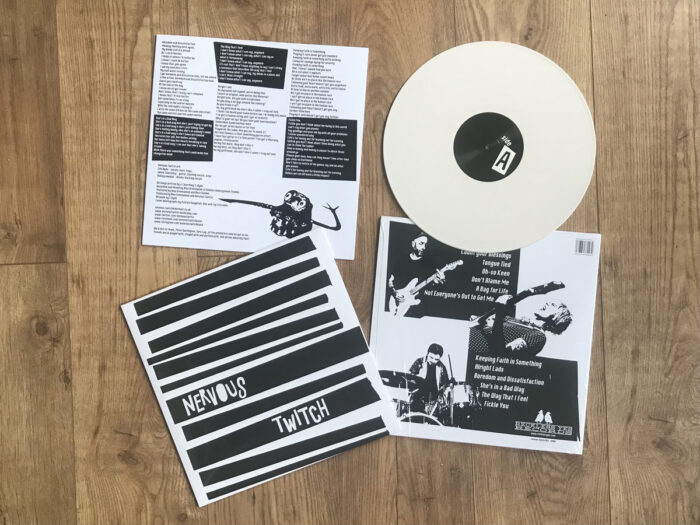 LTW : Has it been difficult building towards the release in such challenging times?

NT : Initially we thought it would be, we thought we have to completely turn around how we work things. In the past we would have planned to promote a new album, and usually we play a lot of gigs and the majority sales for records and merch is at gigs. But we have overwhelmed by our amazing fan base in recent times and have definitely seen a shift in online sales, especially with Bandcamp Fridays, we have ended up doing well with sales of our existing merch and sold out of all our previous records. We can’t thank them enough for their support.

We’ve had great support from Reckless Yes too, and we’re happy to be working with them, picking up tips as we go along with how to do things. Ultimatly were just just grateful we’re an already relatively established band, it must be really tough just starting out now, we really feel for new bands.

LTW : You take a lot of influences in style and sound from the 60’s, 70’s and 80’s particularly (even covering Velvet Underground and The Flatmates in a recent live stream). Was that always part of the plan or is that something that developed?

NT : We’ve always been inspired by music from those eras. We often do the occasional cover in our set, but we threw in all our faves for the recent live stream for a bit of fun. We’ve never had a plan as such, apart from to  work hard at crafting good songs. But on the whole a massive part of our record collection is from those eras, so it’s bound to work it’s way into our sound! Personally (Erin) I would cite The Vaselines and Wreckless Eric (although probably some of his more recent music!) as my influences when it came to writing, amongst others of course!

LTW : If push came to shove which bands would are your favourite acts from those eras?

NT : How long is a piece of string? But to list some; Ramones, Blondie, The Modern Lovers, Television Personalities, The Vaselines, The Beatles, The Pixies, X-ray Spex and everything from Cyndi Lauper to The Wedding Present!

LTW : There seems to be a lot of humour (and the odd bit of sarcasm) in Nervous Twitch. How do keep each other entertained?

NT : Like every band I guess we have our in jokes, which are usually spawned from too little sleep and too many late nights whilst touring (when we could!), and trying to keep ourselves in good spirits for playing. We did go through a phase of creating animal themed dance moves!

LTW : Is there a set approach to your songwriting? Does the music or idea for lyrics come first?

NT : It varies, sometimes the music first, sometimes the words first. Usually one of us will have an idea, bring it to the table, and we all work on that idea; but the odd time we’ll start from scratch together either around a melody or a phrase. 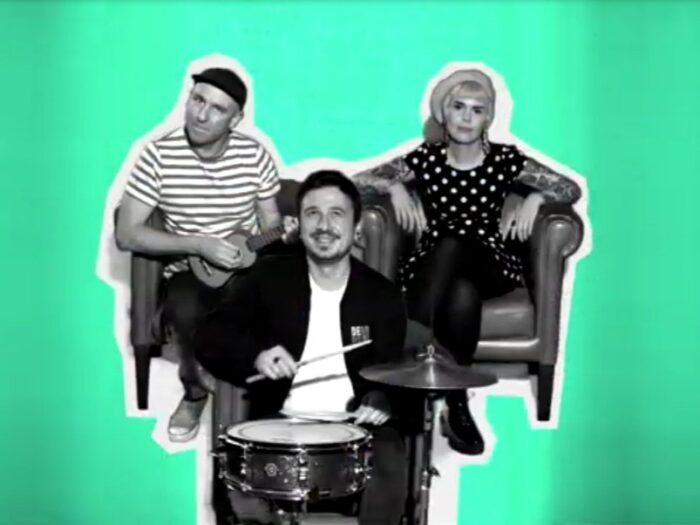 LTW : Which Nervous Twitch track would you recommend to someone to listen to who’d never heard you before?

NT : We have many different sides to our music; observational (So Rock n Roll, John Power, Alright Lads): spiky post punk sound (This Modern World, A Little Self Discipline, Keeping Faith in Something): heart-on-our-sleeve pop songs (Tongue Tied, Look at You Now); which makes it hard to pick just the one song to define us or our sound, but if we had to say one for now, Fickle You, from our new album. (Jay)

Tough one, but for me, Bag for Life (Ash)

LTW : The debut release from the band was 10 years ago, does it feel that long ago?

NT : Wow is it really! I do feel like I’ve been saying to people for a couple of years now that we’ve been together for 5 years, ha ha!

In some ways it feels like the release of Get Back in Line (2015) was start of things for us. Before then we were just finding our feet, and figuring how we do things. But we have covered a lot of ground in those years, so we’re proud.

LTW : One of your earliest releases was a cover of The Runaways ‘Cherry Bomb’, and the follow up was the Bad Reputation EP (although sadly I don’t think you’ve covered the track Bad Reputation yet that I can see). Is there a bit of love there for Joan Jett?

NT : Jay wrote the song (Bad Reputation) without a conscious relation to Joan Jett, and coincidentally we ended up covering The Runaways not long after; I think we ended up recording it just as we thought our version was ace. Our line up was very different when we recorded the Cherry Bomb cover, Erin was on the drums at that time… But, yes, there is a lot of love for The Runaways and Joan Jett, Bad Reputation is up there with one of my fave ever albums (Erin), and the Runaways debut come to think of it!

LTW : Over the last decade music streaming has become the main way most people consume music. How hard is it to build an audience? I imagine there are pro’s and con’s?

NT : I think we all joined this band because we wanted to play music and maybe a few gigs, but as a band you have to become experts with social media and creating a brand to sell to people and compete for a voice through the internet; I feel it can become a little hard and tiresome to keep up with, especially when we’re all very much analogue people and prefer face to face contact. But on the positive side we can connect with people, especially right now we’ve been trying to maintain a relationship with our fans over the country (and world!) and want to try and do our bit in providing some entertainment or fun with our audience, even if it’s just from a post or a video.

LTW : You signed to Reckless Yes last year. How did that come about?

NT : They’ve been on our radar for some time, and they’ve put us on a few times in Derby. We’re fans of a lot of the bands they work with and admire how they do things. They’re also great people, and we feel like we’ve made some lasting friendships.

LTW : From the outside it looks like there is quite a family feel to the label and an affinity amongst acts. How are you finding it?

NT : It’s definitely been great to be part of the Reckless Yes community. It is so much more than a label. Pete and Sarah put so much into it and we can’t thank them enough for that. They definitely bring a great vibe to everything. And on top of that it’s great how all the bands come together and support each other too.

LTW : Had you had an opportunity to meet/play with many of the others before the pandemic hit?

NT : Yes, we’ve played with (and are fans of) Chorusgirl; Duck; Fightmilk – looking forward to playing with them again when we can!

LTW : Are there any particular venues or towns/cities your looking forward to playing once we’re allowed out?

NT : Anywhere, ha ha! Can’t wait to get playing live again! But we have many cities we love playing to name a few; Derby, Nottingham, Sheffield, Hastings, Bristol, Edinburgh. We’ve had a few gigs rescheduled including Wales Goes Pop in Cardiff, which is planned in for September. And we were booked in to support The Rezillos at The Brudenell Social Club, which has been held off for the time being; massively looking forward to playing with one of my teen hero’s! (Erin)

LTW : Last question. What are your Top 3 favourite songs of all time?

NT Nice to end on a hard question! To avoid arguments we have  just decided to divide it up equally and all pick a song we love!

Erin – The Honeycombs, Have I the Right?

Ash – Do you realise? – Flaming Lips 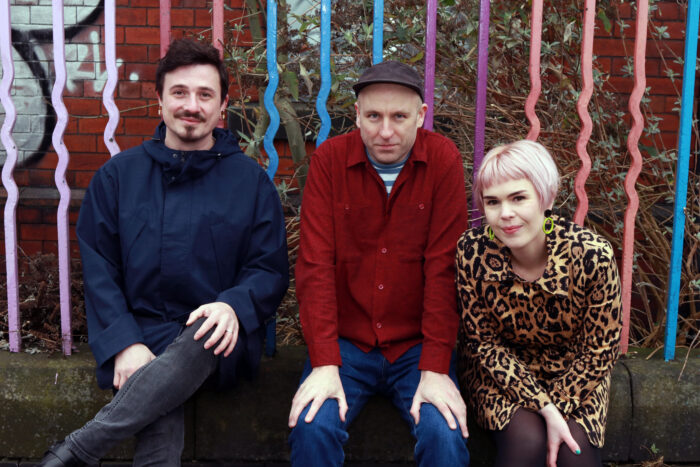 All words by Iain Key. See his Author Profile here author’s archive or on Twitter as @iainkey

Blackpink Previews ‘The Show’ Livestream Concert: ‘We Thought of Our Fans First’

Watch this! New single from Imelda May featuring Noel Gallagher and Ronnie Wood

Pop Smoke - Shoot For The Stars, Aim For The Moon