Blade Runner 2049 director Denis Villeneuve‘s highly-anticipated film adaptation of Frank Herbert’s sci-fi novel Dune takes place primarily on the desert planet of Arrakis. But it looks like Timothée Chalamet‘s heroic young protagonist, Paul Atreides, might have stopped at a Space Gap for some clothes along the way. Empire Magazine has a new image of Chalamet […] The post New ‘Dune’ Image Shows Timothée Chalamet Wielding Dual Knives and Looking Like He Shops at Space Gap appeared first on /Film.

Blade Runner 2049 director Denis Villeneuve‘s highly-anticipated film adaptation of Frank Herbert’s sci-fi novel Dune takes place primarily on the desert planet of Arrakis. But it looks like Timothée Chalamet‘s heroic young protagonist, Paul Atreides, might have stopped at a Space Gap for some clothes along the way.

Empire Magazine has a new image of Chalamet from the movie, along with some quotes from Villeneuve which compare the character to Michael Corleone from The Godfather. 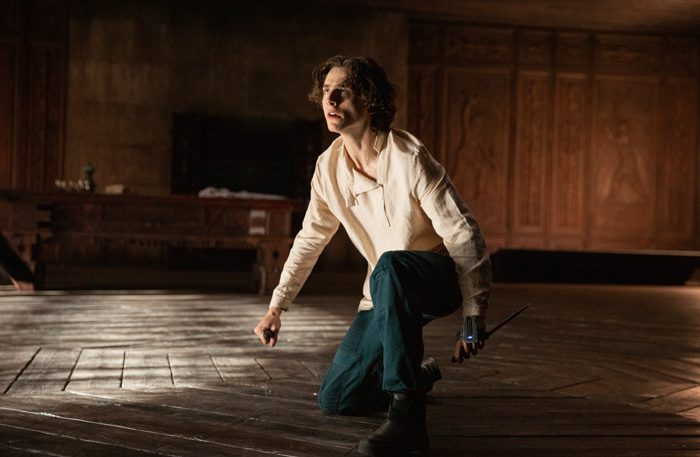 Empire Magazine debuted this new photo, which I’m pretty sure features an early training session between Chalamet’s Paul Atredies and one or both of his mentors, Gurney Halleck (Josh Brolin) and Duncan Idaho (Jason Momoa). Knives play a big role in the Dune novel, and at first I thought this image might be of Paul wielding a crysknife, a special blade made from the teeth of dead sandworms on Arrakis. But since he’s not wearing his stillsuit (a suit designed to preserve the body’s valuable moisture in the unforgiving desert climate), I think this is probably an early training session before Paul and his family make the move to Arrakis.

“Paul has been raised in a very strict environment with a lot of training, because he’s the son of a Duke and one day…he’s training to be the Duke,” Villeneuve told Empire. “But as much as he’s been prepared and trained for that role, is it really what he dreams to be? That’s the contradiction of that character. It’s like Michael Corleone in The Godfather – it’s someone that has a very tragic fate and he will become something that he was not wishing to become.”

As for those clothes, we’ve had some internal disagreements here on /Film about whether or not Paul’s outfit looks too modern for this story – especially compared to the outrageous clothes in the David Lynch movie. One side says anything that looks like you can buy it at The Gap or Target isn’t weird enough for a mega-budget movie set in a fictional galaxy. But the other side appreciates that Dune is evidently being taken a little more seriously this time around. As someone who read the novel, I’d also point to the robotic device on Paul’s wrist (which generates a force field around his body) as a nice touch, and suggest that if anyone thinks this movie looks too normal, to just wait until we see a full trailer. The book has some vivid sci-fi concepts which I can’t wait to see Villeneuve try to visualize, and if he tries to be largely faithful to the story (as it seems he’s doing), we’re all in for a wild ride.

Be sure to head over to Empire to read a couple more quotes from the director. Dune is supposed to hit theaters on December 18, 2020.