New solution for carbon dioxide: Turn it into ‘green’ fuel

Chemists have created a new way to convert carbon dioxide into ethanol. It might one day help remove excess CO2 — a greenhouse gas — from the air. 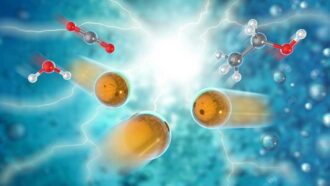 As a greenhouse gas, carbon dioxide — or CO2 — helps warm the atmosphere. But too much of that gas has lately been driving an atmospheric fever. Wouldn’t it be great if that CO2 pollution could instead by turned into a useful product? One team of researchers thinks it’s found a way to do just that. They are turning CO2 into ethanol. It’s the octane-boosting chemical added to most stocks of U.S. gasoline.

and other greenhouse gases

Adding ethanol reduces the energy in a gallon of gasoline. But it offers a nice tradeoff: It helps that gasoline now burn more cleanly. So making ethanol from CO2 would be better for the environment

To do that, the researchers first needed to break CO2 into its building blocks. It turns out that this is a tough task. In such circumstances, chemists often turn to a catalyst [CAT-uh-list]. Such materials speed up a chemical reaction.

Here, the group developed a brand-new catalyst, notes Di-Jia Liu. A chemist at Argonne National Laboratory, in Lemont, Ill., he headed the team that developed this catalyst. With it, the voltage needed to start the new CO2-to-ethanol reaction is far less than what’s needed to kickstart similar reactions, Liu says. And although chemical reactions often make many unwanted byproducts, this new one does not. More than 90 percent of the final product is ethanol, he reports.

Liu and his team described their work July 27 in Nature Energy.

The role of copper

The new catalyst uses a bed of carbon to support copper atoms. Those copper atoms are spread out, as if social distancing. When electricity runs through the catalyst, groups of distant copper atoms join up, forming clusters of 3 or 4 atoms. By firing powerful X-rays at them, Liu says his team could “monitor the chemical reaction as it happens.”

Explainer: What is a catalyst?

Paul Kenis is a chemical engineer at the University of Illinois at Urbana-Champaign. He says the new paper describes “a very interesting, innovative catalyst.”

Anna Klinkova also describes the new catalyst as “very cool.” Still, this chemist at the University of Waterloo in Canada remains a bit skeptical. A closer look at the reaction is needed, she says. “It could be more complex than what is presented.”

The researchers are continuing to experiment with the new process. They also hope to make other useful materials from carbon dioxide. That’s why the new study isn’t a final step, Liu says. “The truth is this is just the beginning of this long research journey.”

The challenge of dinosaur hunting in deep caves

A Solstice Solar Eclipse Is About To Happen: Just How Rare...

These Are The 7 Unusual Fates In Store For The Universe’s...