Last night was the 72nd Primetime Emmy Awards and it was truly unlike any other Emmy’s due to COVID-19 concerns and necessary social distancing measures. The ceremony was originally supposed to be held at the Microsoft Theater in Los Angeles, but was instead held at the Staples Center and largely featured a digital format due […] The post Omega Watches Spotted at the 72nd Emmy Awards appeared first on Bob's Watches. 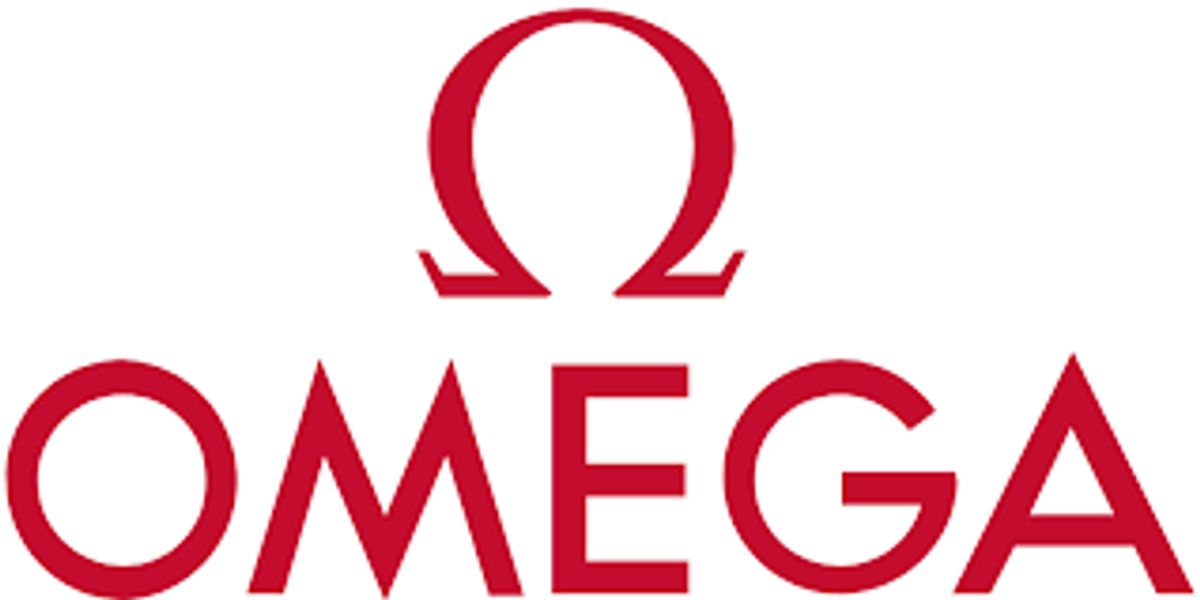 Last night was the 72nd Primetime Emmy Awards and it was truly unlike any other Emmy’s due to COVID-19 concerns and necessary social distancing measures. The ceremony was originally supposed to be held at the Microsoft Theater in Los Angeles, but was instead held at the Staples Center and largely featured a digital format due to the COVID-19 pandemic, with the winners giving speeches virtually from their homes. Despite many of the nominees appearing from the comfort of their own homes, a fair number of them were still dressed up, and there were still plenty of luxury timepieces to be spotted, and among them were a number of noteworthy Omega watches.

– Official Timekeeper of the Olympic Games

– The first watch that was worn on the moon (Speedmaster)

– The first watch to reach the North Pole

Click here for the complete buying guide to Omega watches. 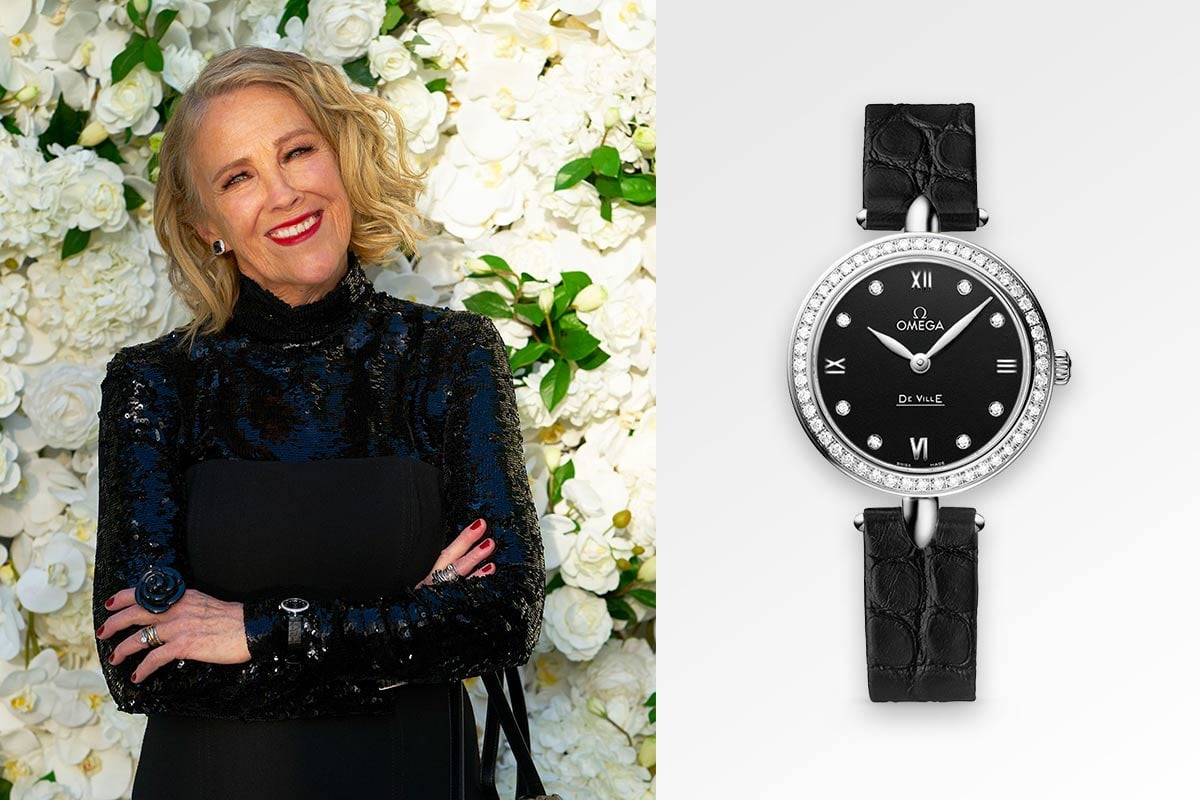 In addition to winning the Emmy for Outstanding Lead Actress in a Comedy Series for her starring role in Schitt’s Creek, Catherine O’Hara could also be spotted wearing the Omega De Ville Dewdrop to compliment her full Valentino look for the evening.

The Omega De Ville Dewdrop (reference: 424.18.27.60.51.001) features a 27.4mm stainless steel case fitted with a brilliant diamond-paved bezel with a fixed dewdrop on either side. Powering the watch is the Omega Cal. 4061 quartz movement, which displays the time on a black lacquered dial finished with eight diamond indexes and rhodium-plated Roman numerals. 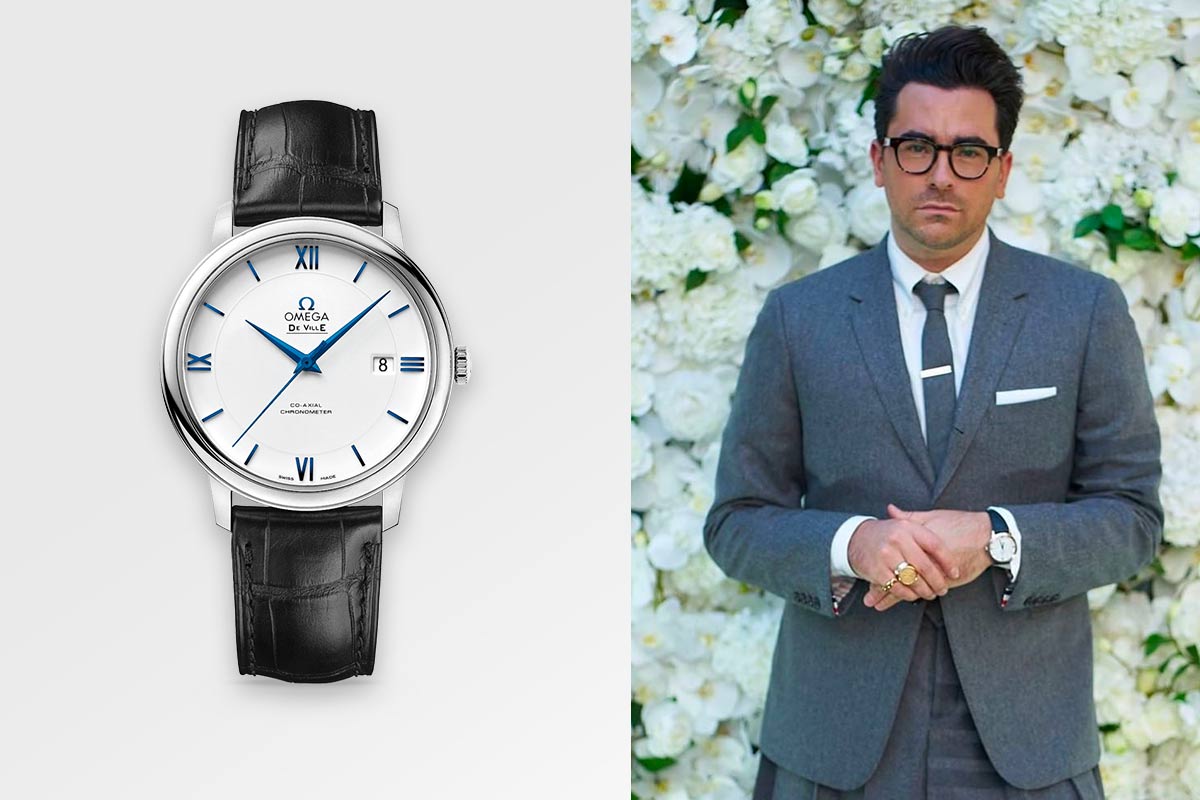 Dany Levy was another member of the cast of Schitt’s Creek who took home an Emmy last night, and just like his co-star Catherine O’Hara, Levy could also be spotted wearing an elegant Omega dress watch when he accepted his award for Outstanding Supporting Actor in a Comedy Series.

Levy’s watch of choice was the Omega De Ville Prestige (reference 424.53.40.20.04.001), which features a 39.5mm case in 18k white gold that houses Omega’s Co-Axial Cal. 2500 movement. Fitted with a timeless black leather strap, the classically styled case is paired with a two-zone white dial with a date window at the 3 o’clock positions, which is complemented by hands and hour markers that are finished in a striking blue PVD. 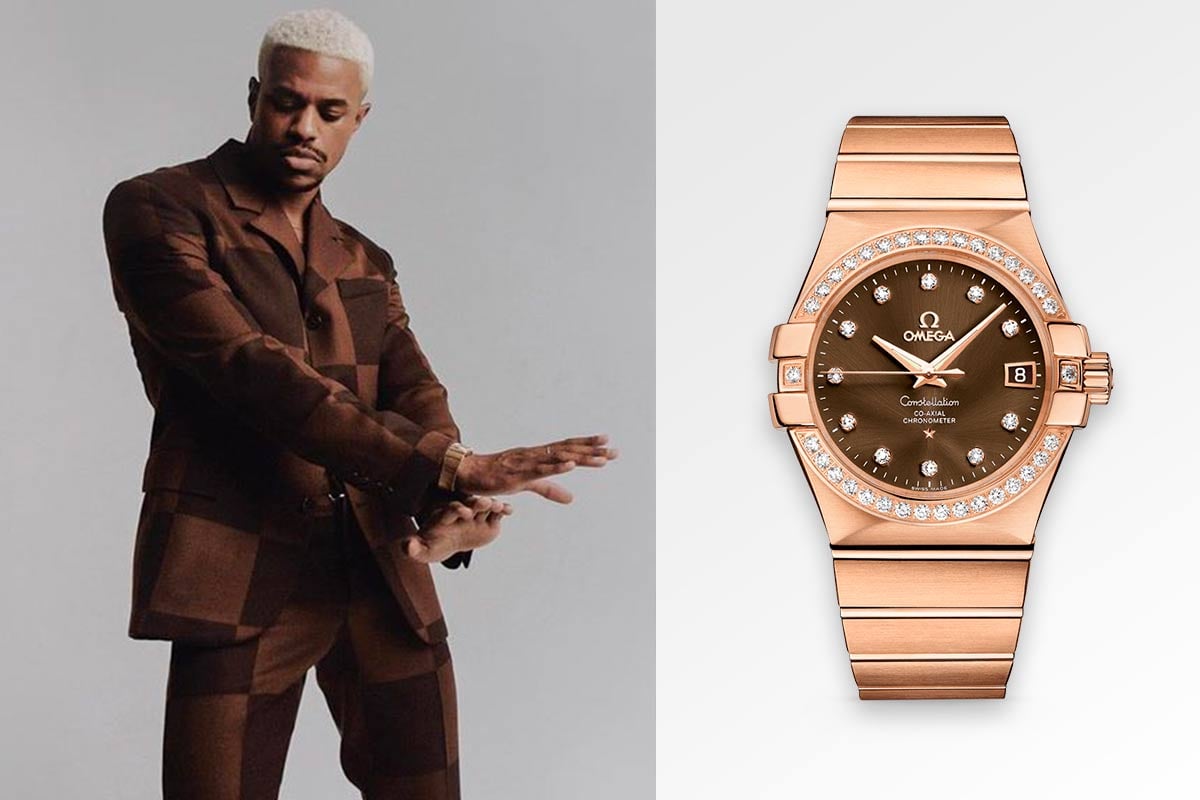 Celebrating his first Emmy nomination for Outstanding Lead Actor in a Limited Series or Movie for the Netflix drama Hollywood was Jeremy Pope, who chose a solid red gold Omega Constellation to finish off his Louis Vuitton and Christian Louboutin ensemble.

Pope’s Omega Constellation (ref. 123.55.35.20.63.001) features a 35mm case and integrated bracelet crafted from 18k red gold, and it fitted with both a diamond-set bezel and a chocolate-colored dial with diamond hour markers and a date complication at the 3 o’clock location. Powering the watch is the Omega Co-Axial Cal. 2500 movement, which sits on full display through a sapphire crystal case-back. 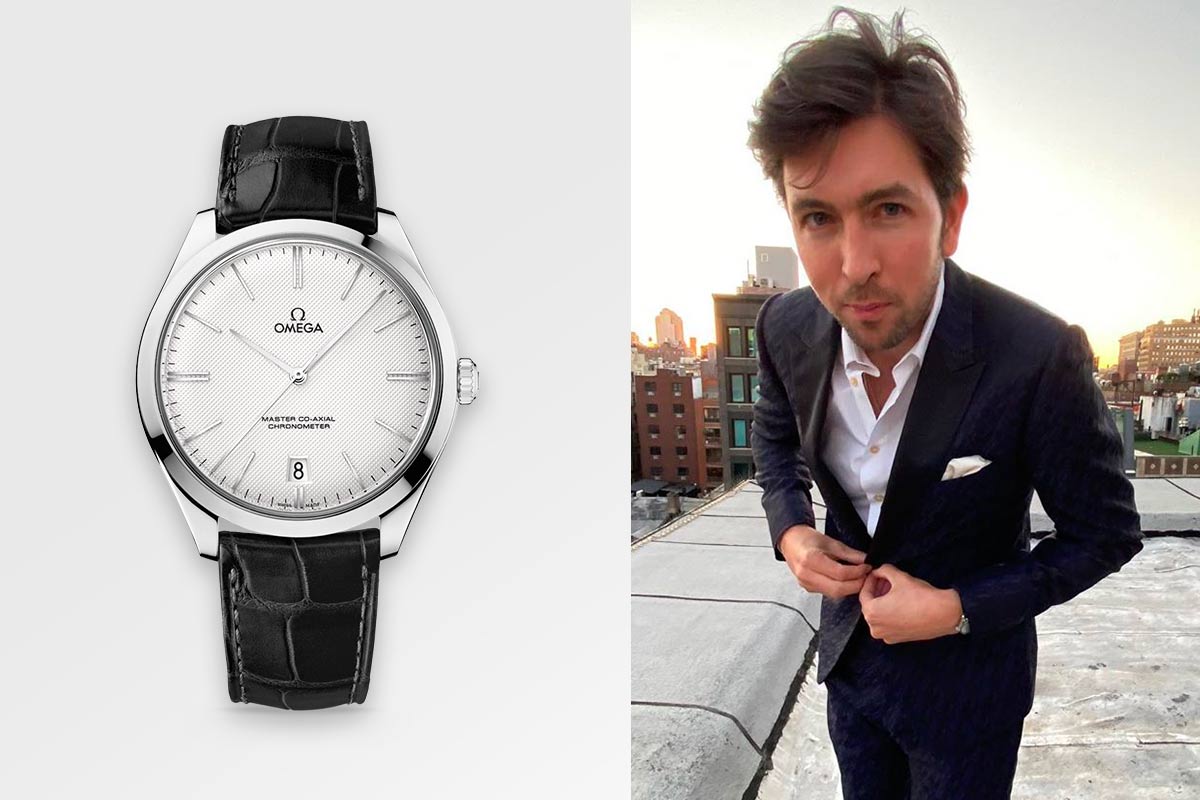 Also celebrating his first Emmy nomination was Nicholas Braun who received a nomination for Outstanding Supporting Actor in a Drama Series for his role in Succession. To mark the occasion, Braun chose an Omega De Ville Tresor in white gold.

Braun’s timepiece of choice was the Omega De Ville Tresor (ref. 432.53.40.21.02.004), which features a 40mm case in solid 18k white gold and fitted with a silver opaline dial that features a vintage-inspired domed structure that is finished with a “clous de Paris” pattern and a date window at the 6 o’clock location. Inside the watch in the manual-wind Omega Master Co-Axial Cal. 8511 movement, which features a red gold balance bridge, a 60-hour power reserve, and magnetic-resistance up to 15,000 gauss. 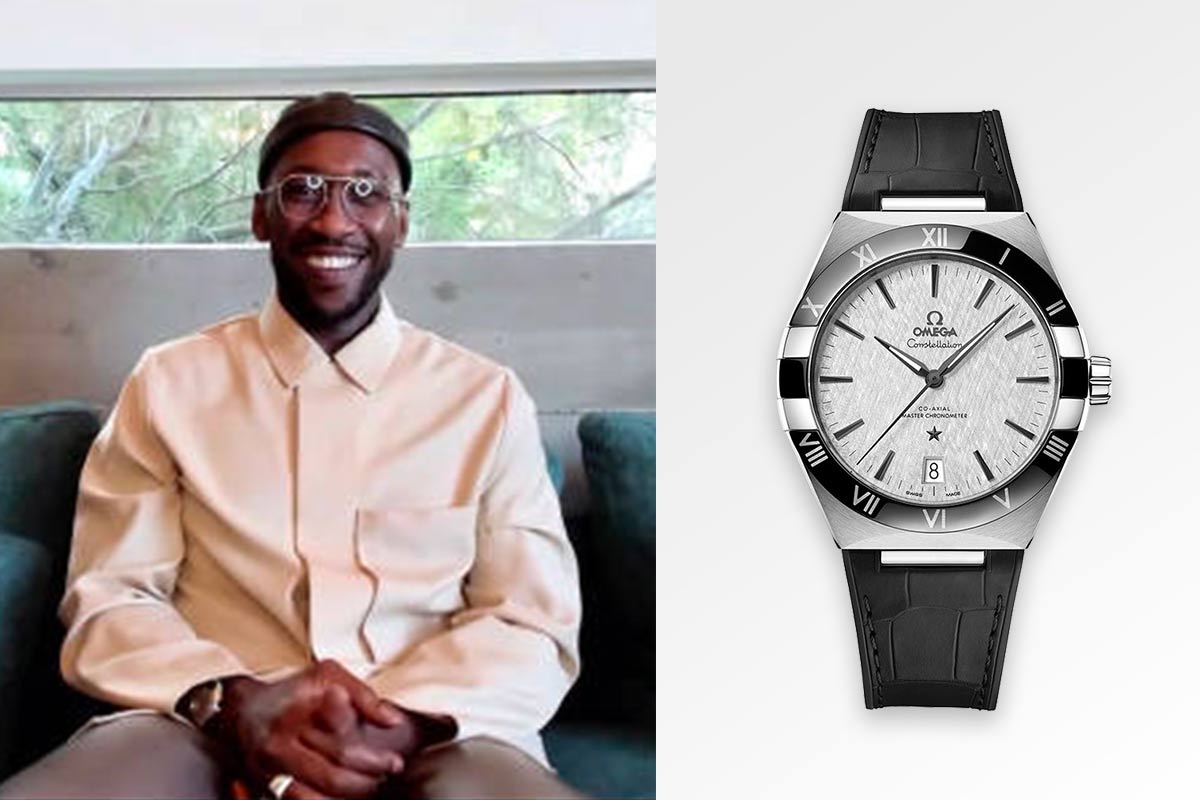 Also spotted wearing an Omega watch during the show was Mahershala Ali, who received a nomination for Outstanding Supporting Actor in a Comedy Series for his role in Ramy. On his wrist was a stainless steel Omega Constellation Co-Axial Master Chronometer.

Ali’s Omega Constellation (ref. 131.12.41.21.06.001) is from the new generation with black ceramic bezels that were released earlier this year. His particular model features a 41mm stainless steel case, fitted with a silk-embossed rhodium-grey dial that features a date window at the 6 o’clock location. Inside the watch is the METAS-certified Omega Co-Axial Master Chronometer Cal. 8900 movement, which is visible through the domed sapphire crystal case-back. Like other modern Omega movements that boast METAS-certified Master Chronometer status, the Cal. 8900 is entirely antimagnetic up to 15,000 gauss.

Heart Cam – Digging into the heart of the matter (II)

Samsung won’t include chargers in some smartphones in 2021...