Known as the seal louse, this tiny insect can survive deep oceanic dives on its mobile home, a marine mammal. 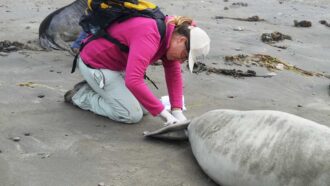 Maria Soledad Leonardi’s work occasionally starts by wrestling with 100-kilogram (220-pound) pups of southern elephant seals. These mammals can dive down 2,000 meters (1.25 miles). At this depth, the water pressure is 200 times atmospheric pressure. She studies these animals in search of tiny lice that piggyback on them. Those seal lice can survive crushing pressures too, Leonardi and her colleagues now report.

Insects are more abundant and widespread than any other class of animal. They’ve successfully colonized all types of hostile environments, from deserts and hot springs to Antarctica. Yet few insects live in a watery world. The seal louse is the only one of them able to survive in the ocean, says Leonardi.

She studies parasites at the Institute of Biology of Marine Organisms in Puerto Madryn, Argentina. Seal lice are parasites that make their homes on pinnipeds. Those are flipper-footed marine mammals, such as seals, walruses and elephant seals.

Knowing that southern elephant seals can dive to great depths, she wondered what would happen to the insects hitchhiking on them. To find out, she’s been working with Claudio Lazzari, an insect expert in France at the University of Tours.

The researchers placed 75 lice in a chamber connected to a scuba tank. They exposed different groups of lice to a range of pressures for 10 minutes. These were equal to what exists at depths of 300 meters (980 feet) to 2,000 meters. Sixty-nine of the lice survived these pressure tests. One louse even withstood the pressure of 4,500 meters (2.8 miles)!

The lice also survived a second round of high-pressure exposures. The researchers observed that younger lice — the equivalent of teens — took longer than adult lice to recover and start moving again after the second simulated dive.

The researchers shared their findings September 9 in the Journal of Experimental Biology.

“I’ve worked [on insects] for 40 years,” says Lazzari. “I love them, because they are very interesting organisms.” Yet despite the new study, seal lice retain some mystery.

For instance, Leonardi and Lazzari have not yet pinpointed how seal lice survive what should be crushing pressures. They do, however, have at least one idea. A scaly armor covers adult seal lice. It might act a bit like the diving bell that protects human divers. That could explain why adult lice handled high pressures better than the teen lice.

In the past, Leonardi and Lazzari have observed that seal lice also can stay underwater for several weeks straight. Seal lice have hollow tubes in their body for breathing. At deep-sea pressures, these tubes will collapse, so there is no way for seal lice to breathe normally.

How can a louse hold its breath so long? Perhaps staying still helps seal lice conserve their oxygen. Indeed, the researchers observed that seal lice gradually stop moving when they were pressurized. From past experiments, the researchers suspect that seal lice might still be able to take in oxygen while under water — but they aren’t entirely sure. Either way, Leonardi and Lazzari want to find out.

Joshua Benoit isn’t surprised that the first insect found to survive such high pressures is the seal louse. He studies insects at the University of Cincinnati in Ohio. All louse species, he notes, even those that live on humans, need to stick with their host animals to survive. Seal lice must, therefore, go wherever their host goes. To do this, these insects have evolved, or adapted, to the environment in which their hosts dwell. This includes extreme ocean depths.

What people learn about the survival secrets of extreme organisms, such as seal lice, may come in handy. It could offer lessons that advance technology. For instance, an enzyme found in bacteria that live in hot springs makes possible the PCR technology used in DNA analyses. Seal lice may have special genes that allow them to withstand high pressures and low oxygen. Benoit suspects that if scientists can identify these genes, they could use them to engineer new types of cells tolerant of high pressures and little oxygen.

He says, “You never really know until you fully investigate some of these organisms.”

Get a move on! Property industry pledges to make house sales quicker

Dolphins can learn from their peers how to use shells as...

Hubble Reveals A ‘Red Dot Surprise’ From The Distant Universe

Batteries should not burst into flames