Paper Mario Theory: Why The Origami King's Universe Is Made Of Paper

Paper Mario: The Origami King brings back the flat versions of Nintendo's plumber. One fan theory explains why the franchise's world is made of paper. 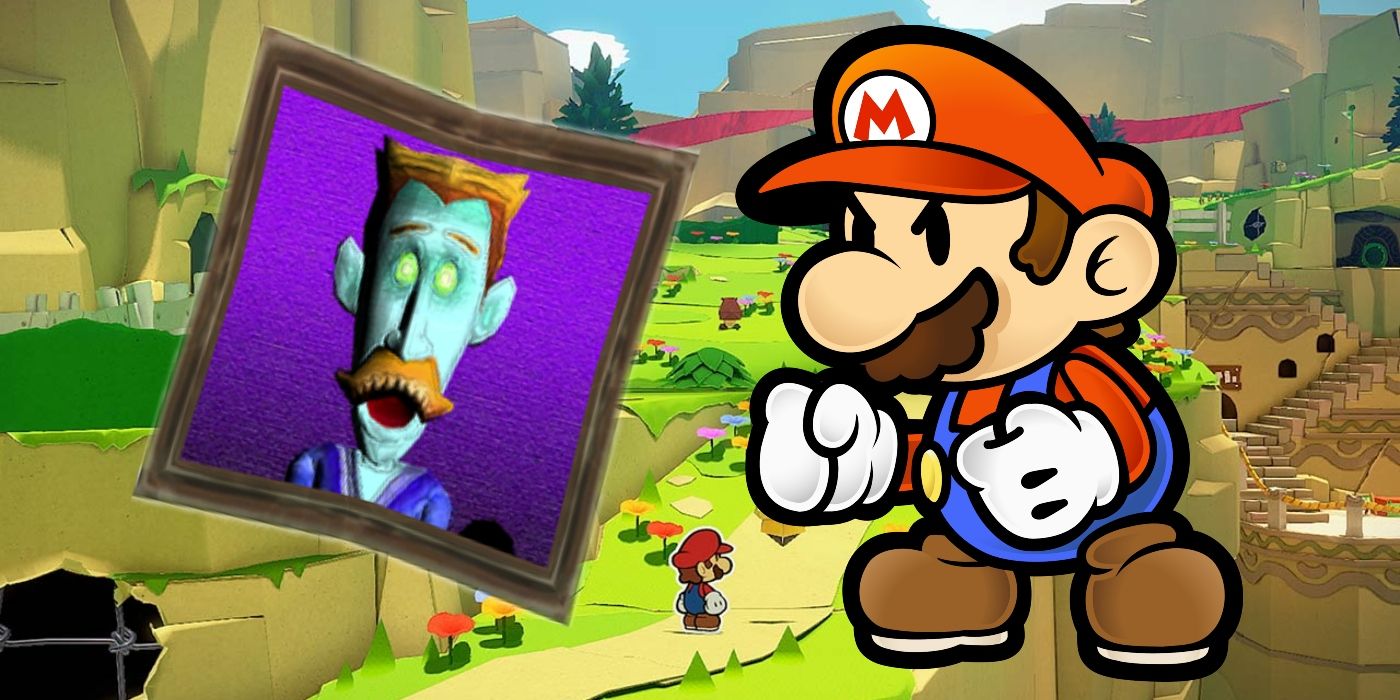 Paper Mario: The Origami King marks Nintendo's sixth mainline entry in the series, an RPG spin-off of the core Mario games. The Origami King appears to continue the series' growing emphasis on the "Paper" element in its world design and story, which may have newcomers questioning why everything is made of paper in the first place. Hints in previous Paper Mario games have led to a few likely theories explaining the franchise's paper world.

The reveal trailer is filled with tons of paper-style graphical flourishes, like paper airplanes flying into battle and both  grain-field and ocean waves made of ripped sheets of simulated paper. There's even a game tease involving paper-mâché masks of popular Nintendo characters, and The Origami King's central plot appears entirely based around the fact that everything and everyone is made of paper. The trailer shows a mysterious entity apparently inducting the Mushroom Kingdom's residents into a cult-like group of origami beings, and characters like Peach and Bowser are seen deformed by this villainous folding.

In the original Paper Mario games, however, the paper aesthetic was little more than a simple design motif and didn't have much impact on plot. What, then, is the significance of Paper Mario's paper world, in terms of the games' in-universe story? Curious Nintendo fans have found evidence of an answer.

In the 2016 , the Paper Mario series (normally restricted to Nintendo's home consoles) crossed over with the handheld Mario & Luigi RPGs. The game begins in the Mario & Luigi universe, where a clumsy and fearful Luigi knocks a large tome off a bookshelf in Peach's castle. The book opens, spewing elements of the Paper Mario universe into Mario & Luigi's. As Nintendo-focused YouTuber Dr. Wily suggested in the video below, this book could be a sort of portal between the two universes, meaning Paper Mario exists in an alternate dimension to Mario & Luigi's, with the book acting as a bridge between them. It may seem less contrived to just assume Paper Mario's universe exists within the book itself, but previous games support the theory that Paper Mario's world is in its own separate place entirely - one which just happens to be made of paper.

Both Paper Mario and Paper Mario: The Thousand-Year Door begin with narration from an unseen speaker, explaining the setup for the games with phrases like "Today, I'm going to tell you the story of..." The first three games are structured in chapters, so it would be easy to assume both of these narrations are that of an out-of-universe voice reading a novel to the player. However, while The Thousand-Year Door opens with a narrator reading through a literal storybook, the original game's narration is in the context of a play, with curtains and a stage. At the game's conclusion, a character named Herringway is said to be writing a book called "Paper Mario" about Mario's adventure, and in the first Luigi's Mansion game, a ghost named Neville reads a book called "Mario's Story," Paper Mario's Japanese title.

Since Paper Mario's book form was apparently created within its own universe and then appeared outside the Paper Mario games, it seems the franchise doesn't take place within the book itself. Instead, Herringway's writing-down of the story may have created a copy of it in the universe, and this book exists in both planes, connecting the two worlds as a wormhole or portal would. The answer to "Why is Paper Mario's world made of paper?," then, is that it just is. It's not paper because it takes place in a book - it's paper because it always has been, in a paper universe existing alongside Mario's more familiar one.

Problems with this theory arise, though, when an odd sequel twist is taken into account: At The Thousand-Year Door's conclusion, a blue Toad is said to be writing another Paper Mario novel, which would later be adapted into a play. If the book seen at the beginning of The Thousand-Year Door was one of Herringway's, read by someone outside Paper Mario's universe, then this could be hinting at a weird, circular origin for the games. The Thousand-Year Door tells the origin of the play that is Paper Mario, but it does so within a novel of its own. Given these inconsistencies, the Paper Mario universe's origins are confounding and vague, but it's likely Nintendo just hasn't thought it out very thoroughly. Regardless, Mario & Luigi: Paper Jam confirms it's indeed in a separate space, accessed via that book in Peach's attic. But like the first games' lack of focus on the paper construction of their world, this theory suggests Paper Mario's book-hopping universe is paper simply because Nintendo wanted it to be.

Star Wars: The Rise of Skywalker - Every New Deleted Scene From The Junior Novelization

X-Men: Everything We Know About The X OF SWORDS Crossover

Marvel Studios Has “Zero” Plans for ‘Deadpool 3,’ According...