Footage shows passengers trapped inside the train, packed tightly together as the water rises. Outside the window, dark floodwater rips past, surging down the tracks. 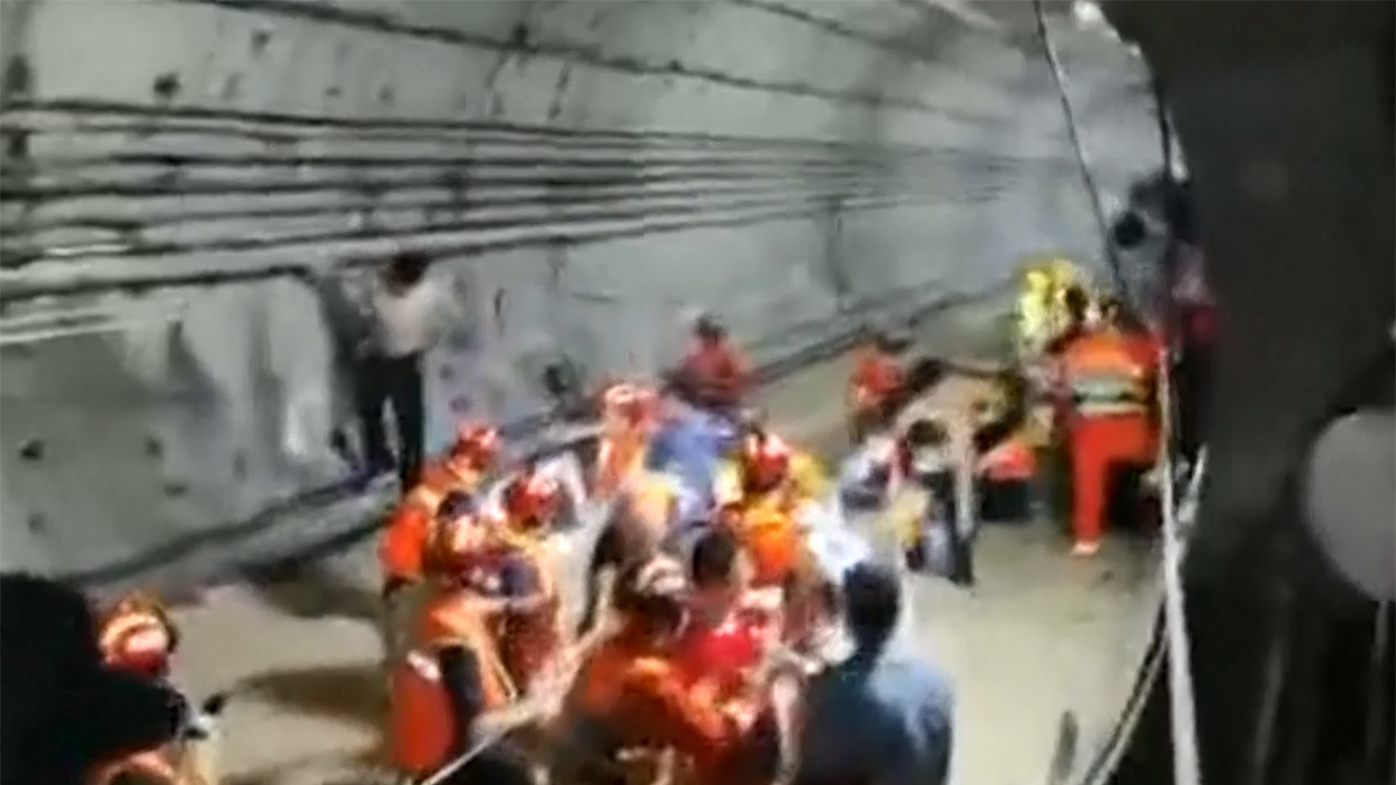 Terrified subway passengers in central China have been left clinging to ceiling handles inside flooded cars on Tuesday, trapped up to their necks in rising water, as record-breaking rains devastated parts of Henan province.

At least 12 people have been confirmed dead in Zhengzhou, the provincial capital, where more than 20 centimeters of rain fell in one hour on Tuesday, according to China's meteorological observatory.

All of the bodies recovered were taken from the city's subway system, provincial authorities said.

More than 100,000 people have been evacuated from Zhengzhou, a city of 12.6 million on the banks of the Yellow River, with thousands of emergency personnel deployed to assist in the effort, state media reported.

And in the nearby city of Gongyi, at least four people were reported to have died, as flood waters swept through residential areas, forcing more than 20,000 people to leave their homes. 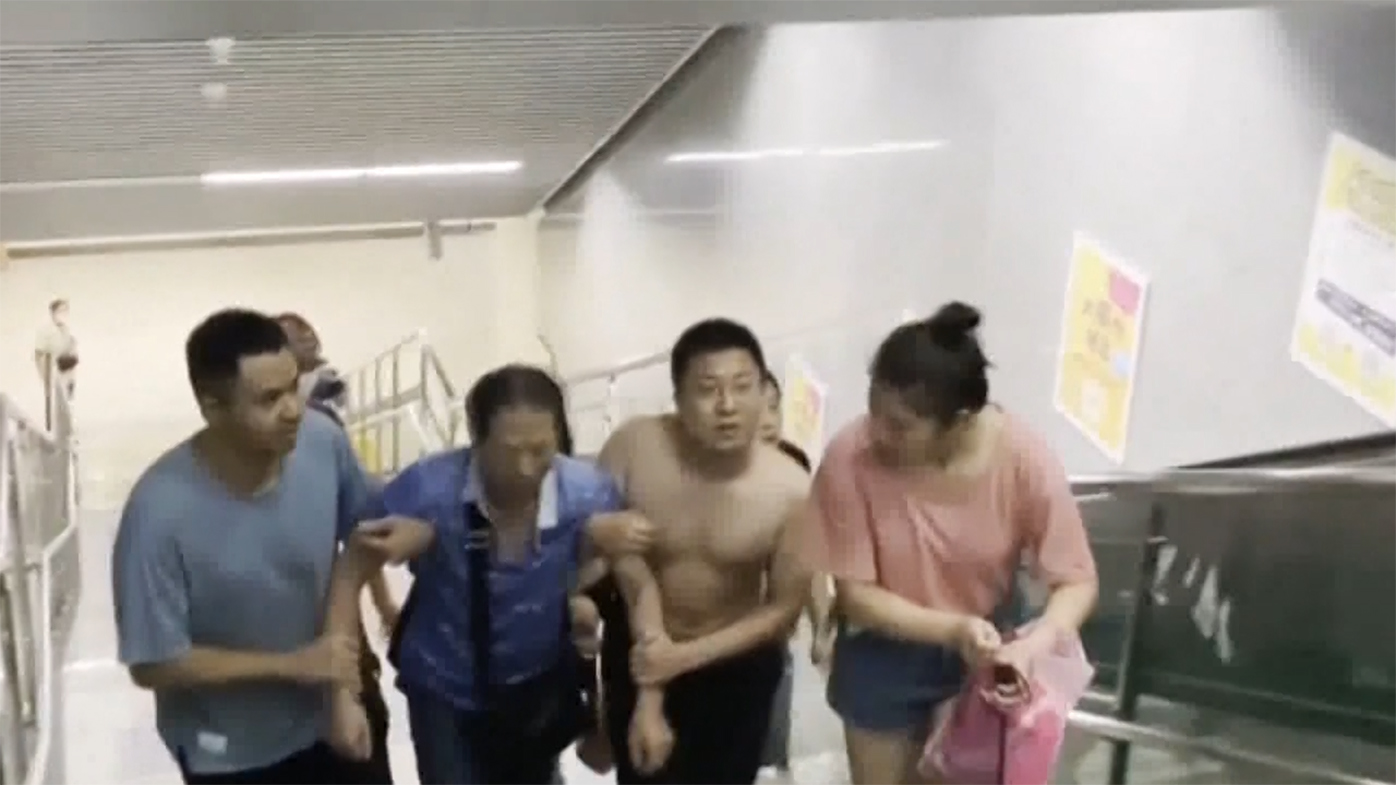 Though flooding during the summer months is an annual occurrence in parts of China, recent record-breaking rains have alarmed scientists and officials, raising questions as to whether the country is prepared to deal with more extreme and unpredictable weather amplified by climate change.

Footage broadcast by Xinhua and shared widely online showed passengers in Zhengzhou trapped inside a flooded subway car, packed tightly together as the water rises. Outside the window, dark floodwater rips past, surging down the subway tracks.

Many of those trapped posted calls for help on social media, according to screenshots circulated online and statements from the Henan fire department.

"The water inside the carriage has reached chest-levels! I already can't speak anymore, please help," wrote one woman, who went by the name Xiaopei.

Minutes later, she posted another comment: "If no rescue comes in 20 minutes, several hundred of us will lose our lives in Zhengzhou subway."

The fire department later confirmed Xiaopei had been rescued. 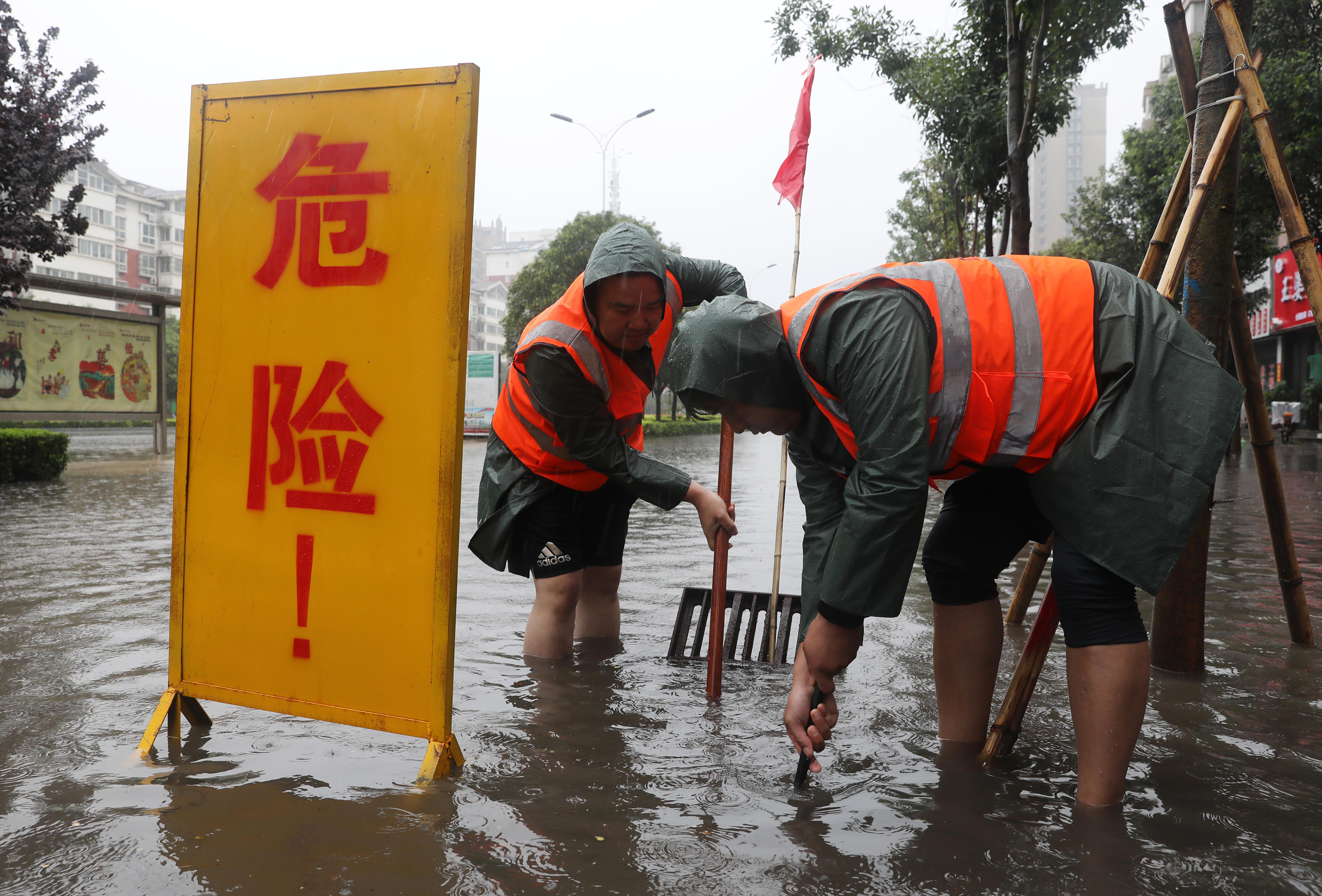 The city's subway system, which contains seven lines and 153 stations, suspended all operations after the incident, provincial authorities said.

Other videos showed residents on the street, water up to their hips, working desperately to pull out people trapped in an underground mall using ropes. Others showed people making a human chain, to prevent being swept away by the current as they struggled through rushing water. 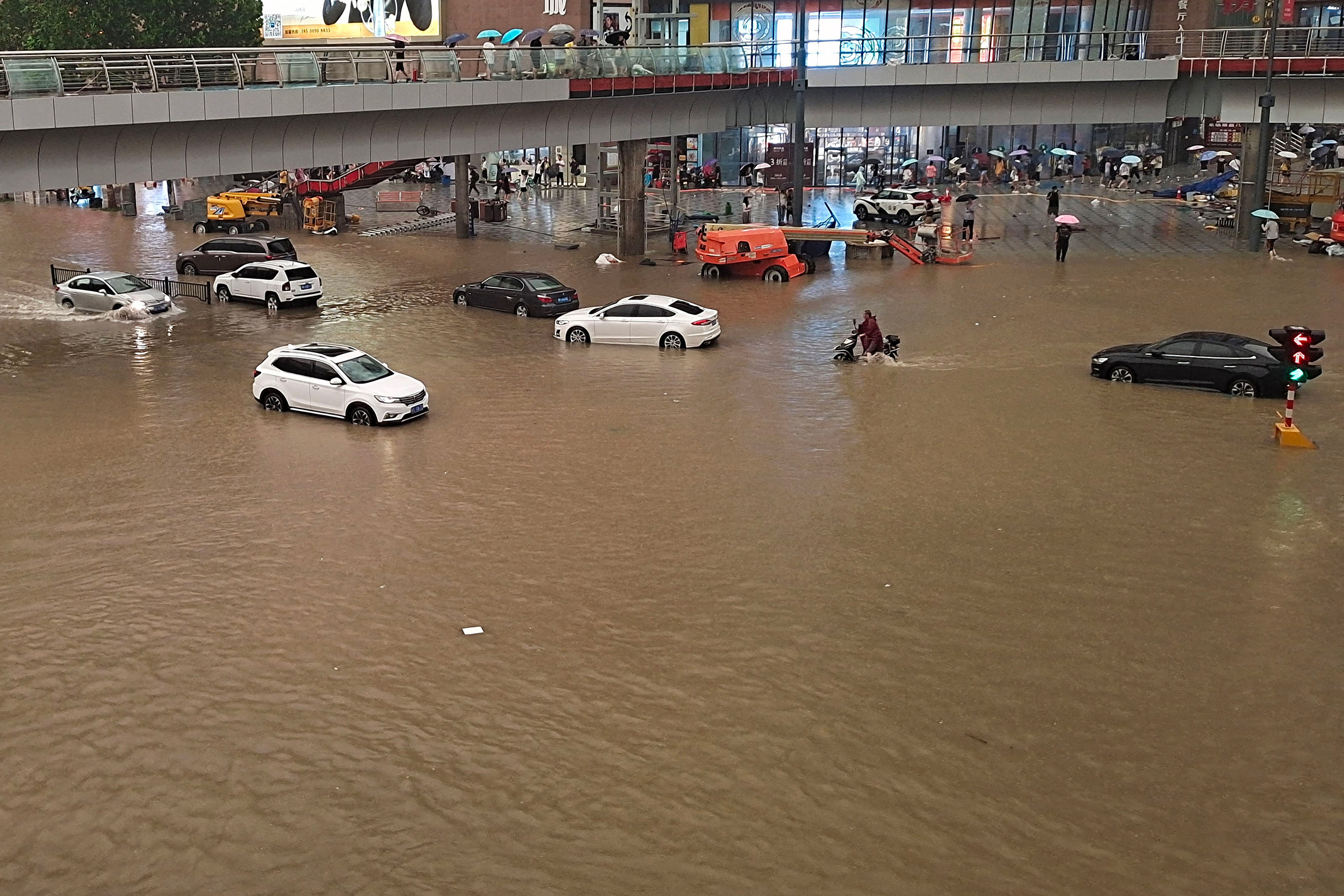 On Weibo, China's heavily censored version of Twitter, a user said the power outage had cut off ventilators in intensive care units at the First Affiliated Hospital of Zhengzhou University. She said her father had to rely on medical workers to manually pump oxygen into his lungs, and pleaded with authorities to restore electricity at the facility.

The People's Daily later confirmed the blackout at the hospital, where it said over 600 critically ill patients needed to be transferred. By Wednesday morning, power had been restored at the ICU unit, the newspaper said.

According to state broadcaster CGTN, more than 6,000 firefighters, and nearly 2,000 members of the police and Chinese military, had been deployed across disaster hit areas. Footage from the ground showed soldiers and emergency teams rescuing residents on rafts and clearing toppled power lines. A report released last week by Greenpeace warned that major metropolitan regions around Beijing, Shanghai and Guangzhou-Shenzhen were under threat from extreme heat and rainfall. Beijing has seen the fastest rise in average temperature of 0.32C every 10 years.

Guanzhou-Shenzhen has experienced 98 heat waves since 1961, most in the past two decades.

The report also said if global greenhouse emissions peak around 2040, some parts of China like Shanghai would experience a more than 25 per cent increase in extreme rainfall -- while other areas, like north-western Guangzhou-Shenzhen, would see more drought.

Though the rains have since eased, problems are likely to persist, as dozens of dams and reservoirs have breached warning levels.

There were conflicting reports about the status of the Guojiazui dam near Zhengzhou, with CGTN initially announcing that it had collapsed at 1:30am on Wednesday, before later appearing to walk back its reporting. A statement from the Ministry of Emergency Management also said the dam had broken, according to a screenshot cited by the state-run China Daily. However, that line has since been removed.

Xinhua reported on Wednesday afternoon that "a large section of the downstream slope of the dam has crumbled, but the dam itself has not collapsed."

In the city of Luoyang west of Zhengzhou, Chinese military personnel raced to blast a dam and divert the floods on Tuesday night at the request of county authorities.

Heavy rains had caused a 20-metre breach in the dam, which authorities said "may collapse at any time," according to a statement from the Central Theatre Command of the People's Liberation Army.

Just days out from the opening ceremony, the first competitions are underway in Tokyo for the Olympic Games. 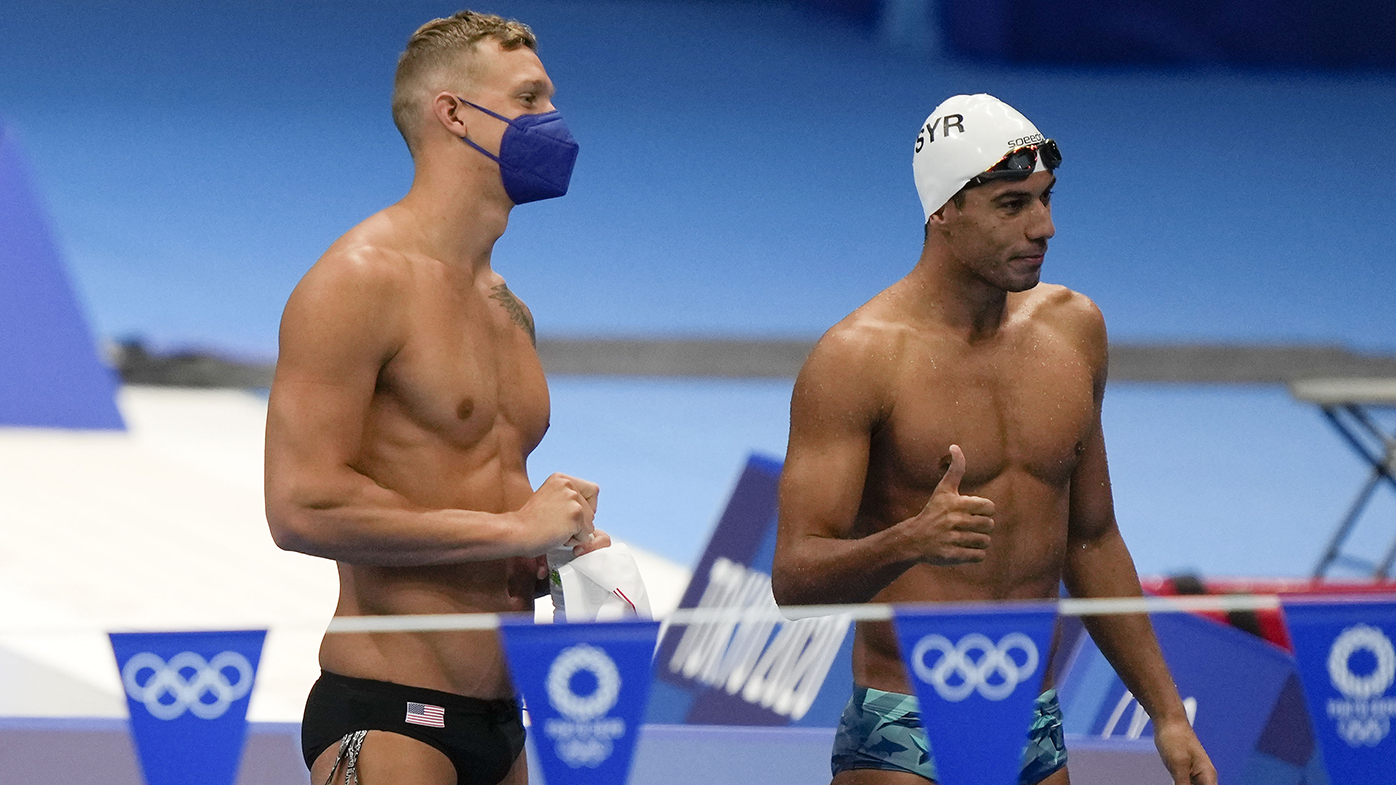 Just days out from the opening ceremony, the first competitions are underway in Tokyo for the Olympic Games.